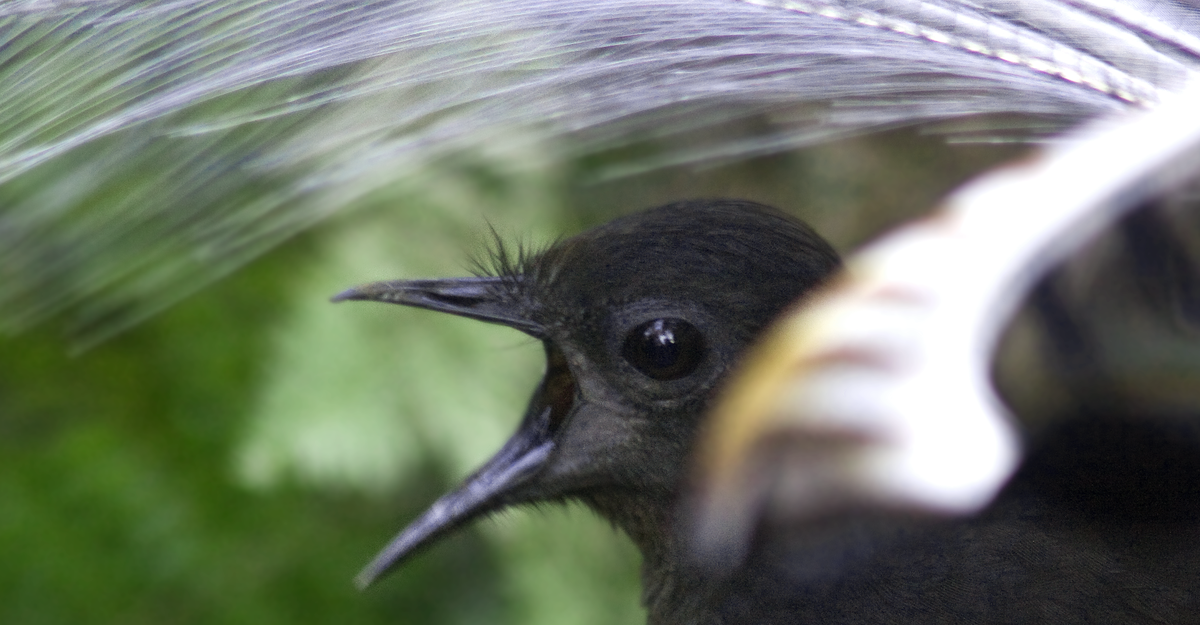 On a dusky evening in 2007, while completing her Ph.D., Laura Kelley was traipsing through the backwoods of Queensland, Australia, when she heard her landlady shouting for her cat. Bonnie! Bonnie! Bonnie! came the call, just as it did every mealtime. Kelley peered across the property, hoping to say hello—but the woman was nowhere to be found. Only when Kelley gazed upward did she discover the true source of the sound: a spotted bowerbird perched in a nearby tree.

The bowerbird almost certainly wasn’t intentionally messing with Kelley, or what might have been a very confused cat. But it had the vocal chops to fool her several times during her stint in Queensland—a feat that’s both impressive and discomfiting. “It was so astonishingly accurate,” Kelley, who’s now studying animal behavior at the University of Exeter, in England, told me. “On more than one occasion, I got caught out.”

Mimicry, at its core, is the catalyst for farce: At its most powerful, it can make other animals (humans among them) question their own senses, or behave in ways they otherwise might not. Pulling it off requires awareness of one’s environment, and of the fragile social networks that single sounds can upend. Birds can manipulate their fellows into a false reality—and the way they manage it is something that the best polyglots among us can’t even dream to achieve.

Scientists have long known that humans aren’t the only animals that eavesdrop, mimic, and deceive. Seals and whales have been documented impersonating human voices; certain bats can buzz like bees to scare the bejesus out of owls. But birds, as a group, are top among the world’s most accomplished auditory copycats. More than 300 songbirds are known to mimic at least one other creature; some, including mockingbirds, imitate so often that less than half of their “speaking” happens in their native tongue.

Not all impersonations are convincing to whoever’s listening; not all of them are even purposeful. But some birds do seem to deploy mimicry for personal gain. Brown thornbills—teeny specimens with all the heft of three pennies—can keep predators 40 times their size away from their nestlings by mimicking other birds’ alarm calls. Baby cuckoos, deposited by their parents as eggs in the nests of other birds, have evolved to copy the calls of their foster species to con their adoptive parents into feeding them. Some are such masterful mimics that they can imitate entire broods of chicks at once.

Perhaps the most duplicitous con birds are the fork-tailed drongos of Australia. The little black birds spend their days listening in on the alarm calls of small birds and mammals—sociable weavers, pied babblers, meerkats, and the like—and will impersonate these manic chirps and squawks when they spy the animals rooting around for insects and lizards. Panicked, the listeners scatter; the drongos then swoop down to feast on the stolen snacks. To keep their victims gullible, or perhaps unsure, the drongos will mix some truth into the lies, sometimes accurately warning other creatures when actual danger is afoot. They establish reputations as stalwart sentinels then leverage that trust in their thieving hijinks. “They’re nasty little pieces of work,” says Tom Flower, a behavioral ecologist at Capilano University, in Canada, who has watched drongos yoink many a meal.

The drongos’ antics introduce a strange paradox: For all their success, many birds’ impersonating powers are sometimes, well, “pretty crummy,” says Mairenn Attwood, an evolutionary biologist at the University of Cambridge. And yet, other animals fall for them consistently. There’s an explanation, at least, for how drongos pull it off: For meerkats and their ilk, the cost of assuming that alarm calls are fake is just too high. It’s still better to heed a dubious warning and lose a morsel of food than to ignore it and lose your life. But for researchers, poor impressions can make certain mimics tough to identify at all. “There could be birds that are mimicking things badly, and we might not know that they are actually mimicking anything because they’re bad at it,” says Chris Balakrishnan, an ornithologist at the National Science Foundation. Our biased human perspective can skew the way we assess mimicry, causing us to cast nets that are too narrow or too wide.

Mimicry can be just as befuddling when it’s done particularly well. In order to study mockery, researchers need to identify incongruity: a bird making a noise that we and the animal listener think it’s not supposed to make. “I suspect I’ve been duped numerous times without even knowing it,” says Jon Sakata, a vocal-learning expert at McGill University, in Canada. It can be a lot to track. Mockingbirds, for instance, are keen on all kinds of cross-species karaoke—which means scientists like Dave Gammon, at Elon University, have to “become experts on the acoustics of every sound made by any species in the local area” just to try and keep up. And although avian imitators have been subject to plenty of scrutiny, the victims of their shenanigans are generally, Attwood told me, an understudied bunch.

Perhaps that’s in part because we, too, are often on the receiving end of feints. Plenty of bird researchers “have been thwarted by the study organisms themselves,” Balakrishnan told me. Sahas Barve, an evolutionary ecologist at the Smithsonian National Museum of Natural History, has been taken in by a drongo mimicking an eagle; Sakata once mistook a mockingbird’s screech for a bona fide car alarm. Even Gammon, who enjoys stumping expert birders with recordings of mockingbirds, still gets played by his subjects on occasion. “Those mockingbirds keep me guessing all the time,” he told me, though he insists that he’s fooled far less often than he used to be.

Just about anyone would likely be tricked by Australia’s superb lyrebirds—quite possibly the world’s most accomplished and convincing mimickers, operating at the intersection of seduction and deceit. During the breeding season, males will post up in trees or atop fallen logs, warbling out intricate arias composed of the calls of more than 20 other species to lure in females. Mimicry even plays a role during the act of sex itself: Males hop down to the forest floor to impersonate an entire mixed-species flock of birds attacking a predator, complete with the sound of frantic wingbeats, while copulating with their mates. “It’s like a one-bird radio play,” says Anastasia Dalziell, an evolutionary ecologist at the University of Wollongong, in Australia, who’s spent years studying the birds. The raucous ruse seems to prolong intercourse—and can also stop a female from ghosting a male before they’ve had a chance to couple up.

This might seem like a bizarre set of noises to set a romantic mood. But work from Dalziell and her colleagues suggests that males might be trying to dupe females into believing that peril is nigh so she won’t terminate their tryst and mate with someone else—a bonkers bird version of “Baby, It’s Cold Outside.” The male will even cover the female’s head with his flapping wings, possibly raising a blindfold that prevents her from noticing that the coast is, indeed, clear.

I asked every expert I spoke with for this story whether birds that use vocal mimicry might be having fun with it—whether they are sometimes being, well, trolls. Most weren’t super keen on the idea without proof. “I don’t think I can go that far,” Flower told me. “My little anti-anthropomorphic bones in my body just can’t allow me as a scientist to go down that route.” Others, though, had been mollified by years of watching birds be straight-up jerks. If some have a mean mimicking streak, “I wouldn’t be surprised,” Balakrishnan told me. Plus, if birds did have a sense of humor, vocal copycatting might be how they put it on display, Attwood said.

Birds, after all, “have the free time and the cognitive capacity” for jokes, Barve told me. “It’s totally possible that parrots are playing pranks on each other out there and we just don’t know it.” If that’s the case, it’ll be yet another way we’re hoodwinked by birds. As much as we fancy ourselves good communicators, speakers, and listeners, they’re the ones that have been outdoing us for millennia, achieving what we humans so often struggle to do: cluing in to other creatures’ wants and needs and fears, transcending the barriers between species, and exploiting the fuzziness therein.

People will inevitably struggle to understand animals that outdo us vocally—that can tap into and re-create soundscapes that we cannot. Still, Dalziell told me, that’s part of the appeal. Listening to a bird’s mimicry “makes you look at the world with a completely different point of view.” It’s a narration of the way an animal interprets its environment and attempts to mold it to its wants. In that context, an avian spoof—a lark, if you will—may not be so much of a stretch.

The post You’ve Almost Certainly Been Duped by a Bird appeared first on The Atlantic.