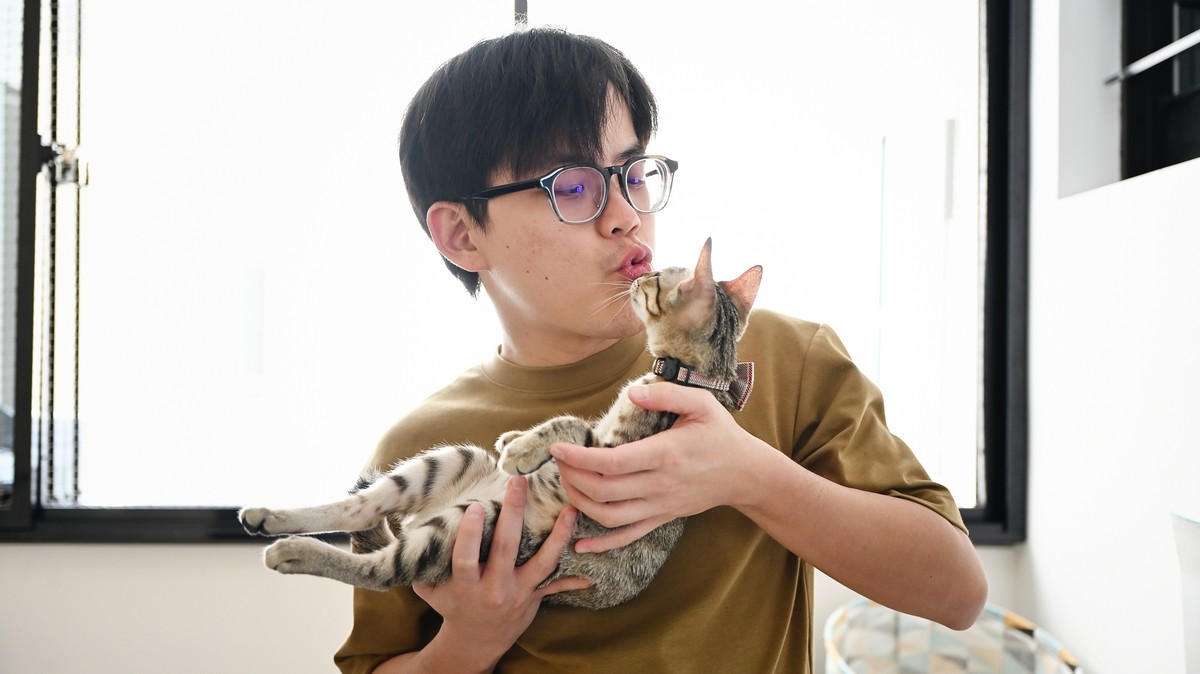 Like so many cat lovers, I tend to greet my kitties in a cutesy voice with a specific set of phrases. When the solemn tuxedo cat saunters into the room, I’ll welcome her by saying, “Hi, little lady.” When the tiger-striped cat comes in for a cuddle, I’ll tell him, “Hello, beautiful boy.”

No doubt most cat owners intuitively feel that their pets pick up on these verbal cues and can distinguish their owners’ voices from the speech of strangers. But now, scientists have presented real evidence that suggests that “cats can discriminate speech specifically addressed to them from speech addressed to adult humans,” a finding that confirms the human–cat relationship is “a close and valuable one,” according to a study published on Monday in Animal Cognition.

A team led by Charlotte de Mouzon, an ethologist at Université Paris Nanterre, played a series of recordings to 16 domestic cats in their home environments to test the pets’ capacity to distinguish between the voices of their owners and strangers. The researchers also explored whether cats could distinguish between cat-directed speech (CDS), which is a specific tone of voice people use to address cats, and regular adult-directed speech (ADS) that we use to speak to one another.

“Who has not, once in their lives, seen someone having a conversation with a non-human animal?” de Mouzon and her colleagues said in their study. “It is no longer a standing secret that, in contemporary western cultures, most humans talk to their pet companions.”

“Here, we report new findings that cats can discriminate speech specifically addressed to them from speech addressed to adult humans, when sentences are uttered by their owners,” the team continued. “When hearing sentences uttered by strangers, cats did not appear to discriminate between ADS and CDS. These findings bring a new dimension to the consideration of human–cat relationship, as they imply the development of a particular communication into human–cat dyads, that relies upon experience.”

The way people talk to cats falls into a “caregiver” speech pattern that is similar to how we address other domestic animals, like dogs or horses, as well as children. There are subtle distinctions between all of these caregiver tones, but they generally all involve “hyperarticulation, shorter utterances, more repetitions, elevated pitch, and increased pitch variation,” according to the study.

To dig into how cats experience these inflections, de Mouzon and her colleagues examined how their 16 cat participants reacted to recording of voices from their owners and strangers in both CDS and ADS. The experiment was divided into three parts that each involved five recordings.

In the first part, the cats heard a recording of a stranger saying a familiar phrase—like “do you want a treat?” or “see you later”—three times. The fourth recording switched to a recording of the cats’ owner repeating the same phrase, followed by a fifth recording of the stranger again. In the second part pf the experiment, the cats listened to their owners repeating a phrase three times in ADS, before saying the phrase a fourth time in CDS, then finishing with ADS again. The third portion followed the same pattern as Series-2, only the cats heard the ADS and CDS phrases from a stranger, rather than their owner.

The team carefully watched the cats’ responses to the experiment and identified more than a dozen behaviors that would indicate a recognition of their owners’ voice, as well as a distinction between CDS and ADS. These cues included dilation of the pupils, vocalization, and movement of the head, ears, or tail.

The results showed that 10 out of 16 cats showed no response to the strangers’ voice, but then perked up in some way when their owners’ voice was played in the first series, suggesting that they could distinguish their owner from the stranger. Half the cats also appeared to react to their owner switching to CDS in the second series, hinting that they knew they were intended to be the receiver of the message.

Both of these results were in line with the team’s predictions, but the third series offered a surprise: The cats seemed unresponsive to the strangers’ voice, regardless of whether the tone was in CDS or ADS. This is a different outcome to similar experiments with dogs that showed canines can tell when they are specifically being addressed, even in a strangers’ voice.

“A lack of familiarization to strangers, associated with less exposure to CDS from unfamiliar people, could be a contributing factor explaining the differences between dogs and cats,” the researchers speculated in the study. “It can be hypothesized that cats having opportunities to interact with people outside of their home may be able to discriminate CDS from ADS, when uttered by strangers as well.”

For this reason, de Mouzon and her colleagues recommended repeating the experiment with cats that are more adapted to strangers to see if those animals could pick up tone differences from strangers. They also acknowledged that their small sample size of 16 cats, all of which are owned by veterinary students, might have impacted the results.

The study is just the latest example of a burgeoning renaissance of cat research that has revealed that cats know each others’ names and that they prefer interacting with humans to getting treats, among many other revelations. After years of being overlooked relative to dogs, cats are now the subjects of many new experiments that have opened an amazing window into the cute little brains of our feline companions.

With this new experiment, scientists have offered proof that cats do understand when we are specifically talking to them, and respond differently to their owners compared to strangers. In addition to confirming the priors of pet owners, these findings can bolster the wellbeing and happiness of cats.

“Indeed, cats—who were not so long ago considered as independent and ungrateful creatures—are in fact very well capable of creating and fostering attachment bonds with humans,” the researchers concluded. “The understanding of cats’ sociocognitive abilities is crucial for improving the quality of human–cat relationships, as well as cat welfare in the domestic environment. The knowledge that cats display the ability to understand a particular way of communicating from their owner, brings further evidence to encourage humans to consider cats as sensitive and communicative individuals.”

The post Your Cat Recognizes the Special Way You Talk to It, Study Finds appeared first on VICE.