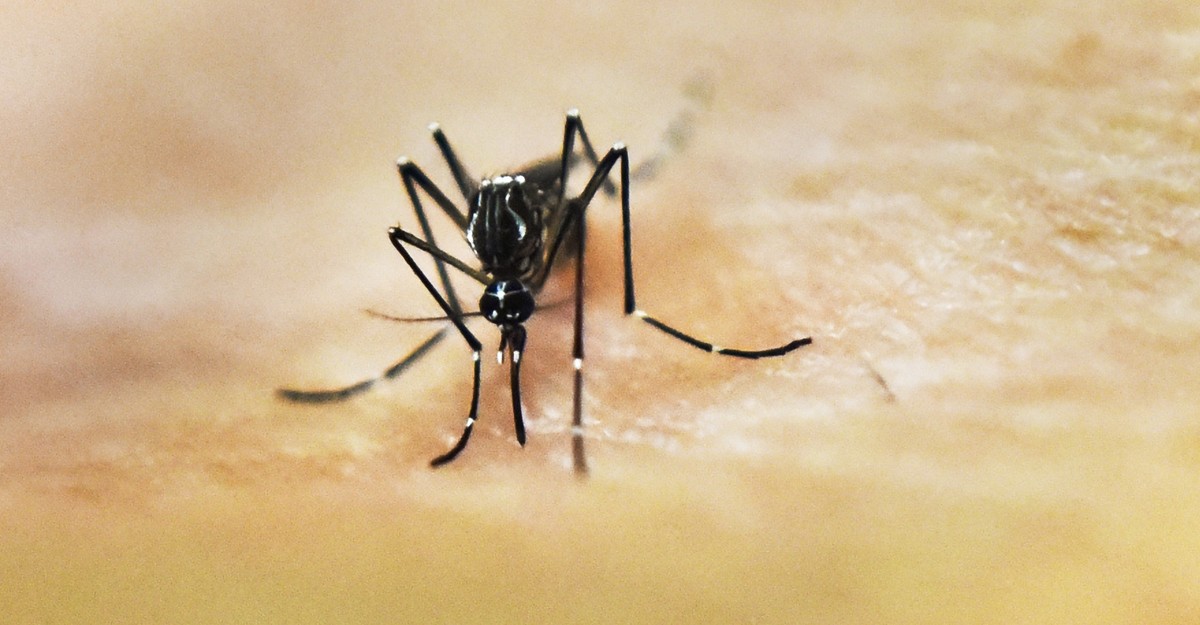 Nothing gets a female mosquito going quite like the stench of human BO. The chase can begin from more than 100 feet away, with a plume of breath that wafts carbon dioxide onto the nubby sensory organ atop the insect’s mouth. Her senses snared, she flies person-ward, until her antennae start to buzz with the pungent perfume of skin. Lured closer still, she homes in on her host’s body heat, then touches down on a landing pad of flesh that she can taste with her legs. She punctures her victim with her spear-like stylet and slurps the iron-rich blood within.

The entire ritual is intricate and obsessive—and nearly impossible to disrupt. Of more than 3,500 mosquito species that skulk about the planet, fewer than 10 percent (and only the females, at that) enjoy nibbling on humans. But once they’re on the prowl for people, neither rain nor zappers nor citronella candles will deter them. From the tips of their antennae to the bottoms of their little insect feet, these human-loving mosquitoes bristle with human-sensing accoutrement, says Leslie Vosshall, a neurobiologist at Rockefeller University. “They really are in the business of finding us.”

Even aggressive genetic interventions aren’t enough to deflect a mosquito’s bite. The genome of a species called Aedes aegypti—a striped skeeter that prefers to feed on humans and can ferry viruses such as dengue, Zika, yellow fever, and chikungunya into our blood—encodes more than 300 distinct types of chemical sensors that help the insects navigate their world. Researchers have managed to introduce tweaks that futz with more than 100 of those genes at once, and yet those mutant mosquitoes “still find and bite humans, which just blows my mind,” says Meg Younger, a neurobiologist at Boston University. The most progress scientists have made through these techniques is cutting the insects’ attraction to us roughly in half, says Joshua Raji, a sensory biologist at Johns Hopkins University.

The reason is, frankly, depressing, as Vosshall, Younger, and their colleagues have found. Their recent work shows that mosquitoes’ odor-detecting systems are, unlike many other animals’, patchwork, chaotic, and riddled with fail-safes that make the insects’ sense of smell extraordinarily difficult to stump. It’s an essential adaptation for a creature that is hyper-focused on us: “They are finding a way to survive,” Raji told me. The insects are literally coded with backup plan after backup plan for stalking us.

For years, scientists were sure that mosquitoes’ odor detection didn’t work in such complicated ways. In the 1990s, researchers performed a set of experiments that suggested that animals across the tree of life, including us humans, subscribed to a pretty standard smelling MO: To deduce distinct scents, creatures manufacture many, many types of olfactory nerve cells, each of them sensitive to exactly one specific type of odor. When complex fragrances filter in, their individual components nestle into receptors atop distinct neurons, like plugs fitting into sockets. The revved-up neurons then shuttle signals to the brain on parallel, independent tracks—keeping their intel separate until a central hub in the animal’s noggin collapses it all together, says Margo Herre, a neurobiologist who trained with Vosshall. It’s an additive system of switches that, coded correctly, yields precision in spades: Tripping Neuron A might mean there’s something hazelnutty nearby. But add Neuron B and Neuron C to the mix, and that could suggest it’s actually Nutella. Scientists called this the “one receptor, one neuron” rule, and for decades, Raji told me, it’s what everyone figured they would find in just about any creature that possessed a sense of smell.

But mosquitoes, scourges that they are, were delighted to take this nice, neat dogma and totally screw it up. Their olfactory neurons, Vosshall’s team discovered, don’t respond to just a single odor; many of them instead recognize several scents. Their surfaces are studded with multiple types of receptors, all configured slightly differently, like a universal outlet adaptor. No longer do neuron subtypes A + B + C all need to activate in order to tell the brain, Thar be a snack; each could potentially pass that info on alone. That comes in handy when human blood is on the menu: Thanks to the vagaries of genetics, diet, lifestyle, environment, and more, “we all smell very different,” says Andrea Gloria-Soria, an entomologist at the Connecticut Agricultural Experiment Station. An olfactory system that’s loosey-goosey with its wiring can substantially raise the chances that the average mosquito smell cell will react when something delectable saunters by.

Mosquitoes probably do lose some acuity by stacking their cells like multitools, Herre told me. Although a neuron that’s provoked by a ton of different things is more likely to detect prey, it’ll also have a lot of trouble distinguishing which of its many triggers is turning its gears. But for hungry mosquitoes, maybe that’s not such a terrible tax: As long as the insects can locate a viable host, they hardly care which of us it is. (Is it human, or is it dancer? Doesn’t matter—as long as there’s blood.)

The system is “really redundant,” Younger told me, so much so that it’s quite challenging to break. Humans, who do smell according to the Traditional Rules of Sniff, are easy to dupe: A mutation that affects just one type of receptor can take out of commission every neuron that bears. With mosquitoes, though, such sabotage would require an impractical number of genetic tweaks, Vosshall told me—which means there’s little hope for, say, engineering mosquitoes that can’t or won’t sniff our bodies out. “They’re really the ultimate predator,” says Omar Akbari, a biologist at UC San Diego. “You can’t find a single person on Earth that hasn’t been bitten at least once.”

People-piercing mosquitoes might have good reason to be this clingy. Humans are super social and super hairless, a clean and convenient smorgasbord. Our blood helps nourish developing eggs, and our objects and architecture collect standing water, giving the insects a perfect spot in which to breed their young. Each of us is a mosquito “Walmart,” as Vosshall put it—a one-stop shop for all the creatures’ baby-rearing needs.

The insects’ infatuation with us is costly: By way of the many, many deadly pathogens they carry, mosquitoes kill more people than any other animal on Earth does (except, well, us). Stopping certain species from biting us, by messing with their smell systems or by any other means, remains a key goal of global health. One path forward involves population control. Akbari’s team, for instance, is one of many that are engineering sterile male mosquitoes that, once released, will compete with unaltered males for mates but sire only unviable eggs. Other researchers are breeding strains that will introduce modified genes into disease-carrying species, rendering their offspring less able to chauffeur pathogens from person to person, or making them far less likely to survive.

Even if turning off mosquitoes’ smell cells is a dead end, cluing into how their olfaction works can still help with the design of new repellents that could target tons of their chemical sensors at once, Gloria-Soria told me. DEET, for instance, is thought to work at least partly in this way—although, after decades of research, scientists are still sussing out exactly how, and some species are now acquiring resistance to the stuff. Investigating skeeter smell could lead us to better-understood alternatives that aren’t quite so greasy and gross.

Or perhaps the best solution lies not in repelling mosquitoes, but in baiting them better. Instead of slathering ourselves with gunk that turns our tasty skin toxic, maybe we could cook up traps that distract mosquitoes with something that smells even more alluring than a hot, sweaty, mouth-breathing human. Raji told me that some scientists are tinkering with recipes of lactic acid, ammonia, and carbon dioxide to entice female skeeters into parfum de people snares. If that’s the way of the future, it’ll be quite the olfactory flex: a way of leveraging how much mosquitoes love us to ensure that they never get too close.

The post You Have No Idea How Good Mosquitoes Are at Smelling Us appeared first on The Atlantic.