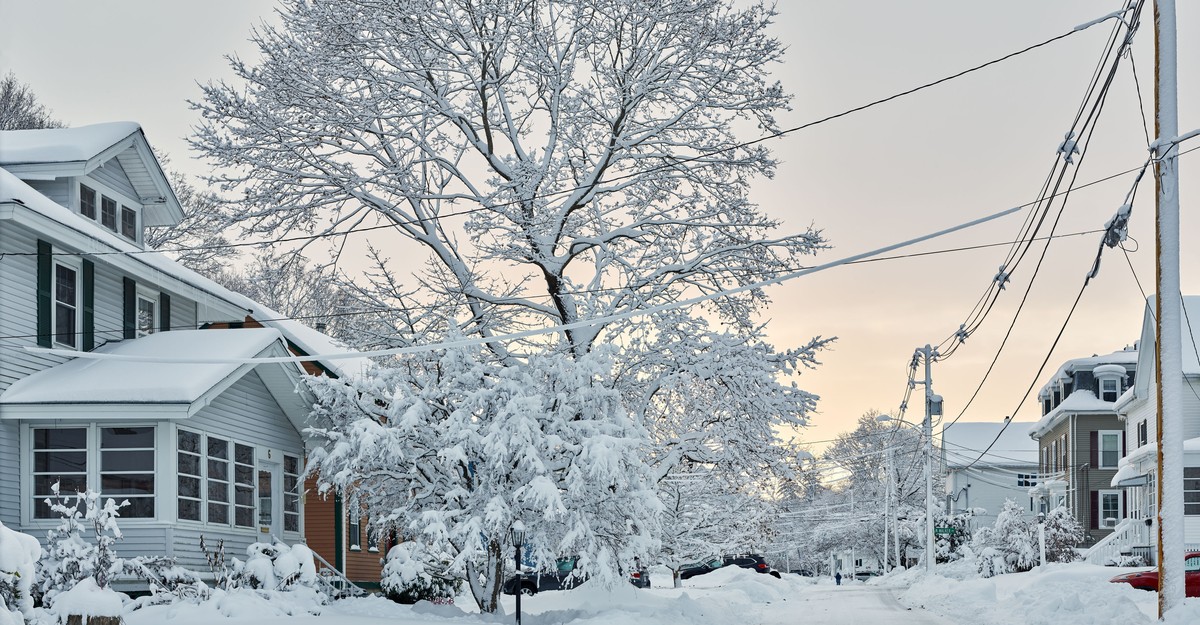 My first winter in Boston, the last patches of snow on my street didn’t melt until late June. It was 2015, the year the city broke its all-time record for annual snowfall: 110. 3 inches, more than twice the average. The public transportation system became a nightmare. Some schools had to extend their academic year HTML1. The dogs began climbing snowbanks to break free of their fenced-in yards ; a local Yeti helped shovelers. The city eventually ran out of places to dump the piles of snow–prompting then-Mayor Marty Walsh to consider throwing it all into the harbor like so much British tea.

It was an epic winter, New England at its picturesque best. And I, a born-and-bred Californian, absolutely hated it. If you’d told me at the time that Boston winters would get only milder as the years wore on, I honestly might have said, “Great.”

The problem, of course, is that winters in Boston, and the rest of New England, have gotten decidedly too mild. The northeastern swath of the United States and the ocean waters around it have become two of the world’s fastest–warming places–a trend that’s “most pronounced during winter,” says Alix Contosta, an ecosystem ecologist at the University of New Hampshire. Studies from Contosta and others have shown that, over the past century, climate change has cleaved about three weeks off of snow’s typical tenure in the Northeast. Should that trend continue through the next hundred years, snow may someday cover New England’s landscape for only about six weeks a year, about half the norm of recent decades. The rapid decline in snowfall may be particularly severe for the American Northeast. This region is known as the most winter-loving area of the globe.

Growing frostlessness is hardly just a New England problem. Nowhere is warming faster than the Arctic, where sea ice continues to vanish at alarming rates, imperiling countless creatures that need it to survive. In the American West, typically snowcapped mountains are bare, depriving the drought-prone region of water. And northerly countries such as Iceland have begun to hold funerals for glaciers felled by the planet’s implacable heat.

New England, though, is uniquely positioned to lose its frozen flakes. It sits at the nexus of several climate-change-driven forces that are colliding with increasing frequency. The Gulf Stream, a strong ocean current that lifts warm water from the Gulf of Mexico up and east into the North Atlantic, has been weakening under the influence of climate change, leaving toasty tides that should be in Europe instead lingering along America’s East Coast. This is also why many European winters are becoming more severe. This coastal heat reduces snowfall and accelerates ground melting. At the same time, hotter oceans leave more moisture in the air–so when it gets cold enough, more snow falls. And the Arctic, as it heats up, is doing a worse job of clinging to its chill, which now frequently dribbles down the sides of the globe like the whites of a cracked egg.

The result is that New England sees fewer snowstorms, and many of the ones that do still appear are harsher and more prolific than the historical average. “We’re seeing less of the little nickel-and-dime storms and more of the blockbuster storms,” says Judah Cohen, a Boston-based climatologist at Atmospheric and Environmental Research. The winter season has also become wetter and more volatile. More precipitation descends as rain; the season whipsaws between hot and cold, interspersing freak blizzards with bizarre heat waves.

As temperatures continue to climb, seasons–once cleanly separated from one another by quirks such as humidity and heat–“are starting to meld into each other,” says Jacqueline Hung, a climate scientist at the Woodwell Climate Research Center. Winters are beginning later and ending sooner; eventually, “we might start to see a loss of four seasons,” Hung told me.

That shift has become visible in the span of just decades. Chris Newell is a cofounder of Akomawt Educational Initiative. He also belongs to the Passamaquoddy Tribe. He could almost climb onto the roof of his home when powder would accumulate so high. Now “it’s like a different world,” he told me–a change that threatens the identity of his community. Passamaquoddy’s history has been intertwined with the land. The tribe’s name is a tribute to the love they have for spearing Pollock. A warming world isn’t just about the climate, Newell said: “This is going to change our relationship to our own territory.”

Many New Englanders still consider frequent flurries a nuisance–something they have to shovel away or kick through. However, snow’s seasonal nature has supported local livelihoods for many years; it is about to disappear. Ski resorts, stripped of their main source of commerce, have turned to synthetic snow or closed down. Loggers, best able to do their work when the ground is frozen or snow-covered, are now struggling to harvest timber without damaging the soil. Rising temperatures year-round may even make maple syrup in some parts of New England harder to collect and less sweet.

And it’s not just humans in climate change’s crosshairs. “I don’t think people appreciate everything that snow does for us,” the University of New Hampshire’s Contosta told me. Snow acts as an insulator for fragile soil, swaddling it like a fluffy down coat; its light, shiny surface reflects the sun’s rays so they don’t overtoast the earth. It is a great place for microbes and plants to thrive. Animals burrow inside of it to evade predators. When snow vanishes from habitats, frost is forced deeper into the soil, causing tree roots to die and rot. Lyme-disease-carrying ticks–normally killed off by winter frost–survive into spring at higher rates, which allows them to latch on to more mammals, such as moose and humans, as temperatures warm. Also worrying is the torrential rainfall replacing snow, which can leach nutrients out of soil and dump them into rivers, starving local forests and fields, says Carol Adair, an ecosystem ecologist at the University of Vermont.

These changes are happening so quickly that local wildlife can’t keep up. Alexej Siren, another University of Vermont ecologist, told me that many snowshoe hares, which have evolved over millennia to seasonally camouflage themselves, are now shedding their brown summer coats for white winter ones before snow blankets the ground. During the particularly snowless winter of 2015 to 2016, hunters told Siren they felt guilty: The hares had just gotten too easy to catch.

Snow is woven into the cultural DNA of America’s Northeast as well. New England, so the saying goes, has “nine months of winter and three months of darned poor sledding”; the first photographs of snowflakes were snapped by a farmer in Vermont. And it should surprise exactly no one that The Atlantic–which used to be based in Boston–has published some lengthy odes to nature’s dandruff, including one that is titled, simply, “Snow.”

Of course, appreciation for snow was here long before there was a New England at all. Darren Ranco, an anthropologist at the University of Maine and a member of the Penobscot Nation (which won many an early winter battle against English colonizers because it was the only side wearing snowshoes), told me that his people’s notion of seasons is tied to the 13 moons that make up each year. Two of them, takwaskwayi-kisohs (“moon of crusts of ice on the snow”) and as@paskwacess-kisohs (“moon when ice forms on the margins of lakes”), roughly correspond to March and December, respectively. Now “that doesn’t make as much sense,” Ranco said.

In the aftermath of gargantuan nor’easters, climatic trends are easy to forget–a possible risk this coming winter, which Cohen thinks may be snowier than the past two. Adair said that it is easy to fall into the trap of thinking “Oh, it’s freezing, so everything’s okay.” But a strong storm (like new snowfall) might help erase concerns about the future.

But many people need only look into their own past to recognize what has been lost. Contosta fell in love with the snowscapes of New England when she moved to Connecticut in the 1990s. While on a walk in the woods, she saw, for the first time, how crystals cloaked the ground and branches in gleaming veils of pearl. “The woods took on a totally different personality in the snow,” she told me. Contosta witnessed much of the powdery wonderland melt over the past two decades. Winter is harsh; trees and ground are barren. Her two children feel at times ambivalent about winter. The elder–who is adopted and spent his toddlerhood in Florida–“went berserk” when he moved to New England about 10 years ago. “He ran outside with bare feet in his pajamas and was eating snow off the trees,” Contosta told me. “He thought it was the most amazing thing.” Now, though, the start of the year brings mostly slush.

On the precipice of my ninth New England winter, I’m still not a total convert. However, I have been here long enough to feel nostalgic for the snow that I used to hate. Without snowy winters, I’m not sure what the Northeast looks like. How will I describe snow to people who might not get it often? Is there a way to explain to future generations why Norman Rockwell’s paintings are so beautiful? I don’t regret the horror I felt when I experienced my first big snowstorm. But the next one I’m in, I’ll try to enjoy while I still can.

The post What Will New England Be Without Its Classic Winters? appeared first on The Atlantic.