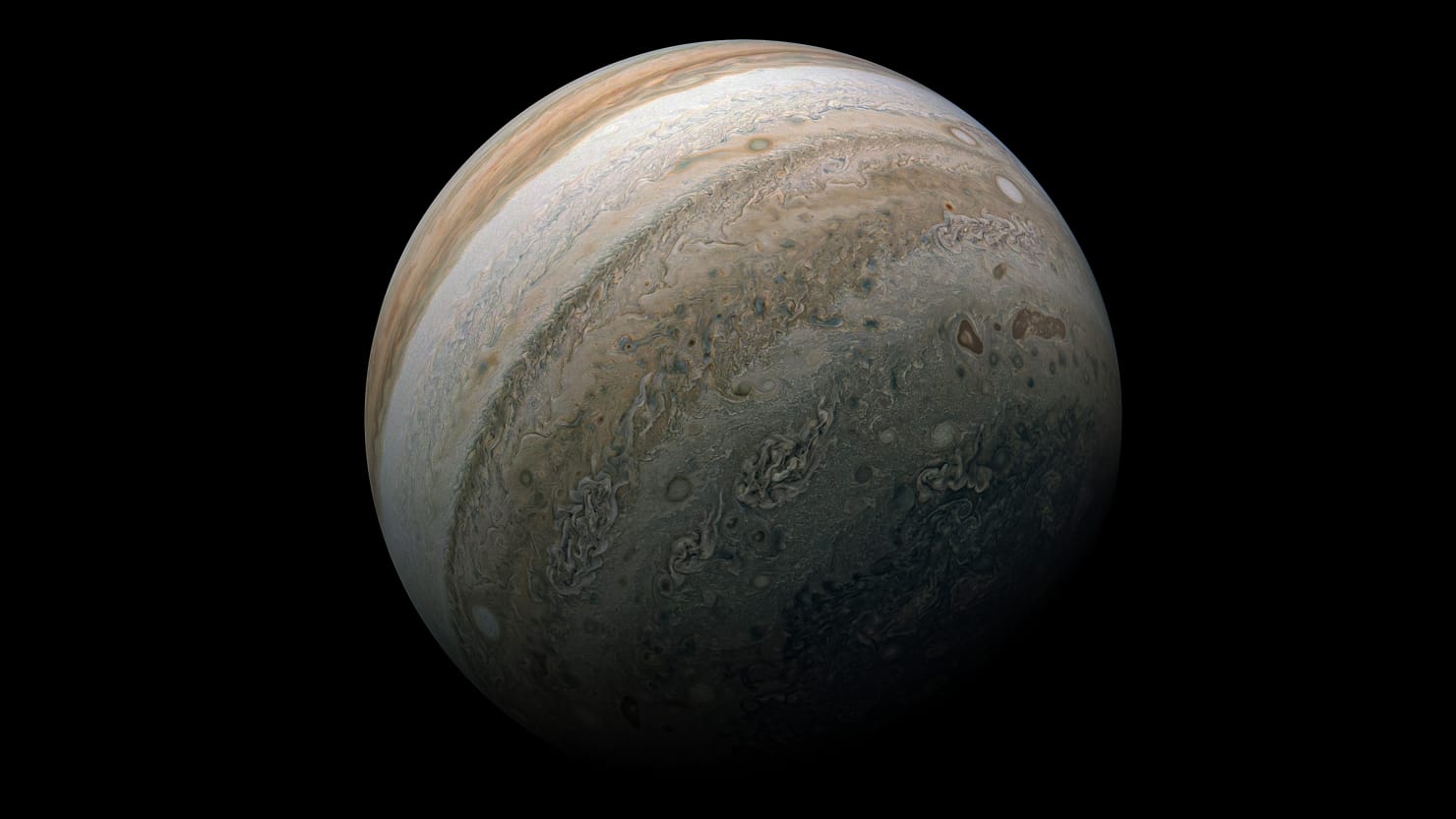 Astrobiologists want one thing above all else: to find proof of alien life. This is not an easy task. Space is vast. Stars, planets, and moons are innumerable. Our probes are few and far between and our telescopes can see only so far and with so much fidelity.

But this helps narrow down the search. A team of French astrobiologists, led by Artem Aguichine from Aix-Marseille University, have turned their attention to Jupiter. It is one of our strangest planets. “Understanding planetary formation is key to predict the habitability of planets and the search for extraterrestrial life, which constitutes the main goal of astrobiology,” Aguichine told The Daily Beast. Aguichine’s new study, recently peer-reviewed and submitted to The Planetary Science Journal, appeared online on May 2.

Jupiter’s atmosphere probably can’t support life–at least, not life as we currently know it. So it stands to reason that planets like Jupiter also shouldn’t support life. If we can figure out where the planet came from and how it got so unlivable, we might be able to rule out–in our search for extraterrestrials–some of the roughly 5,000 nearby “exoplanets” in star systems other than our own.

No one is quite sure exactly how the fifth planet from the sun formed and how it got where it is. The oldest and biggest of our seven neighboring planets, it’s mostly gas by volume–with a roiling, hydrogen-and-helium atmosphere 2,000 miles thick and crisscrossed by clouds laced with ammonia crystals. Astrobiologists believe it is hostile to life.

Only two probes have paid a close visit to the massive, gassy planet in the past 25 years. NASA’s Galileo probe between 1995 and 2003 and the Juno mission from 2016 to 2018. Using data from those probes as well as other fly-by missions, Aguichine and his team built a sophisticated computer model that they hope can accurately trace Jupiter’s formation starting around 4. 6 billion years ago–and also chart its movement across the solar system. The model incorporates a variety of results from space science. There are rules for how ice and vapor behave in space, especially in close vicinity to a star. There are also rules for how primordial space rocks clump together to form the cores of planets, and for how those rocky cores gather up gas from nebulas they pass through before settling, producing magnetic fields, and making up a grown-up planet.

Applying their model to the data from Galileo and Juno, Augichine and company concluded that Jupiter may have been a restless planet in its youth–moving toward and then away from the sun as it gradually transformed into the gassy behemoth that’s likely hostile to life that we now know.

If the team can confirm their conclusions by way of ever-better telescopes and future probes, they can apply the same model to other big, gassy planets scattered across the galaxy. If those planets match Jupiter, we might be able to rule them out as possible homes for E.T..

Dramatic atmospheric features in Jupiter’s northern hemisphere are captured in this view from NASA’s Juno spacecraft.

The gas giant, for all its mass, is light on its feet so to speak. According to consensus, the planet was formed from a rock core located hundreds of millions miles away from the sun. Tugged on by a gassy nebula that once surrounded the star, as well as by the core of Saturn, which began forming shortly after Jupiter, the rock that would become the planet moved closer and closer to the sun over a period of millions of years. It is called migration by astronomers. Having grown to its bloated size, the planet eventually settled in its current orbit, 470 million miles from the sun.

Scientists agree Jupiter’s passage across the solar system may have been one of the formative events in the formation of, well, everything else around us. It was able to sweep aside many asteroids and scoop out a lot of the sun’s nebula. The trail left behind a trail of rock debris, which eventually formed into smaller planets, including Earth. The big idea is that Jupiter, the “King of Planets”, played the key role in shaping our solar system’s appearance,” Christoph Burkhardt of Germany’s Institute for Planetology told The Daily Beast.

That’s where the consensus ends, however. Ravit Helled, University of Zurich planet scientist told The Daily Beast that it is difficult to distinguish between different formation scenarios. Another popular theory has Jupiter forming 1. 7 billion miles or so from the sun before slowly closing the distance.

Aguichine and his team disagree with that theory. The model they have created supports the more complex idea of the Grand Tack, which is a technique in sailing called tacking. It involves a change in direction as a sailboat moves against the wind. In that origin story, the planet formed at a distance between 300 and 450 million miles from the sun and, over a period of millions of years, migrated up to a couple hundred million miles closer.

That’s where Saturn–a younger and speedier planet–caught up to Jupiter. Yanking on each other with the swelling force of their respective gravity, the two huge planets cast each other away from the sun. They both migrated back outward to the orbits where we now find them.

NASA’s Juno spacecraft captured this view of Jupiter during the mission’s 40th close pass by the giant planet on Feb. 25.

“Our results are compatible with some theories where Jupiter was not subject to strong migration,” Aguichine said. This is due to the fact that there are a lot more heavy elements than hydrogen in Jupiter’s atmosphere, suggesting it was born closer to its home. After all, those elements had to come from somewhere. They may have been in the nebula which once covered the sun, before other planets such as Jupiter took it.

If the gas giant was born nearly 2 billion miles from the sun, it would have fewer heavy elements, according to Aguichine’s model, because there were never many heavy elements that far out. Thus Aguichine and company’s assertion is that Jupiter formed much closer to the sun–a starting position that aligns with the Grand Tack theory.

This science is still in flux. Aguichine, along with his coauthors, stressed the need for more data to conclude that Jupiter had a near-sun-reversing jog in its youth. They wrote that further developments in modeling Jupiter’s deep inner will allow us to better understand its structure and composition. This will enable us to distinguish between different formation scenarios.

It would help to look more closely at the data from the Juno probe, Jonathan Lunine, chair of the astronomy department at Cornell University and one of Aguichine’s coauthors, told The Daily Beast. We could also send a new probe to Saturn, which may have traveled a path similar to Jupiter’s.

In the meantime, it can’t hurt to start comparing Jupiter to some faraway exoplanets. We might find a few that look like they formed by way of back-and-forth tacks around their stars, the way Jupiter may have. Doing so could potentially eliminate some of those planets from our search for alien life.

Lucky for us, we’ve got just the thing: NASA’s new $10-billion James Webb Space Telescope, which launched in 2021 after decades of development. Lunine stated that JWST would help with the detailed compositional measurements needed to determine atmospheres for giant planets orbiting other stars.

The new telescope has just begun capturing its first, super-sharp images of distant planets. Planets that might be just as weird, and hostile to life, as Jupiter.

The post We Must Unravel Jupiter’s Cryptic Origin Story to Find ET appeared first on The Daily Beast.