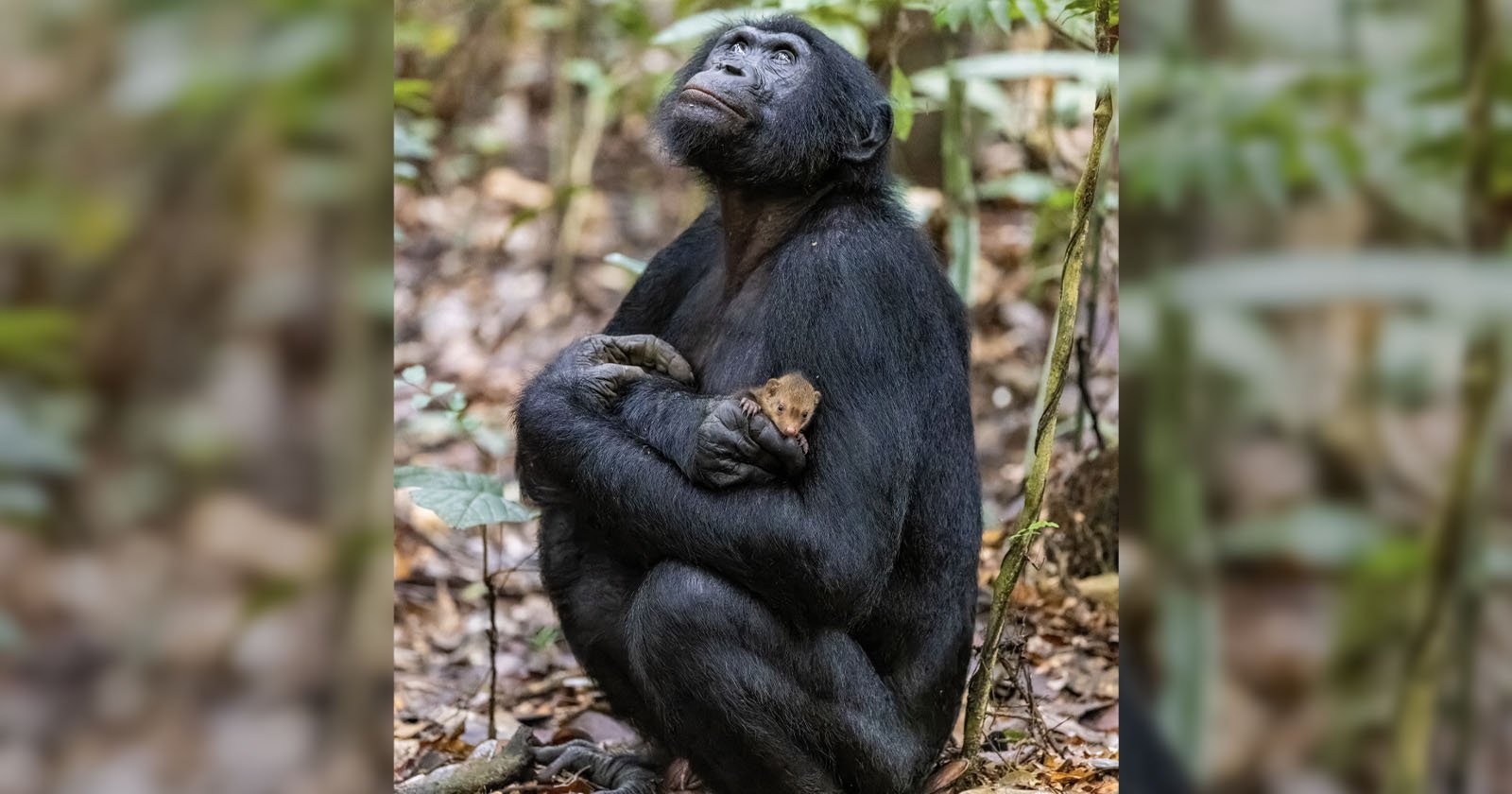 Christian Ziegler took this photo of a wild bonobo, a great ape species. It looks like it’s cuddling with a mongoose. While the species is known to be gentle, the truth behind the photo may be much darker than what appears to be affection.

Zeigler’s photo is one of the finalists — specifically one of the “most commended” entries — for the Natural History Museum 2022 Wildlife Photographer of the Year competition. The other finalists can be seen in PetaPixel’s original coverage.

The photo shows a young male bonobo holding a baby mongoose deep within the rainforest. Although the still image may seem to depict a tender moment, it may not have been taken in the rainforest. The pup survived and was released safely. However, there may be a darker story.

Affection or Something Else

Seigler works for the Max Plank Institute of Animal Behavior as a photographer and coordinated with one of the institute’s scientists, Barbara Fruth, to document the behavior of wild bonobos in the Congo where they are native.

The image of a wild bonobo holding another species in their arms is quite enticing. But whether or not this demonstrates that bonobos can genuinely care for other species is a difficult question to answer,” Ziegler says.

The group that Fruth and Ziegler were studying has been the subject of research into behavior for over 20 years and as such, humans are able to get as close as five or 10 meters to the animals.

” I followed the group from around five in the morning to midday every day. It was amazing be allowed near the group and I feel so lucky to have spent this time with wild bonobos. They are such intelligent, sociable animals. Being in their presence feels not unlike being with a group of humans,” he adds.

He draws on Fruth’s experience to explain the photo, as it isn’t clear what the ape’s intentions were.

” Bonobos have a long history of being gentle, peaceful, and empathetic. From their captivity, we know that bonobos take care of other species. However, in zoos and sanctuaries, the day-to-day nutritional requirements are taken care of,” Fruth says.

“In the wild though, bonobos face many constraints such as food shortage, diseases, competition, and pressure from human activities. Bonobos rely on plants for their food, but they also hunt a variety of mammals, including squirrels and small forest antelopes. Attacks happen in ambush. Occasionally more than one individual is captured and this may include animals that are mothers with dependent offspring. She continues, “Bonobos don’t kill prey immediately but eat it when it’s still alive.”

They often share their prey’s flesh with other bonobos. Rarely, they will eat leftover prey. These individuals usually ingest the leftovers later. Therefore, we cannot label this behavior in the wild as ‘caretaking.’ In the particular case in the photograph, the male released his ‘pet’ as he joined other social events and continued traveling. It is possible that “pets” may be kept in order to draw interest from others

Bonobos, an endangered species due to habitat loss and poaching, are also not excluded. Ziegler tells those interested that Bonobo Alive supports anti-poaching patrols and invests in education to teach local residents about the importance of forests. Anybody who is able to help them should be encouraged.

” “Having witnessed the passion, engagement, and support from the local communities, I know that supporting this association will be a wise investment,” he said.