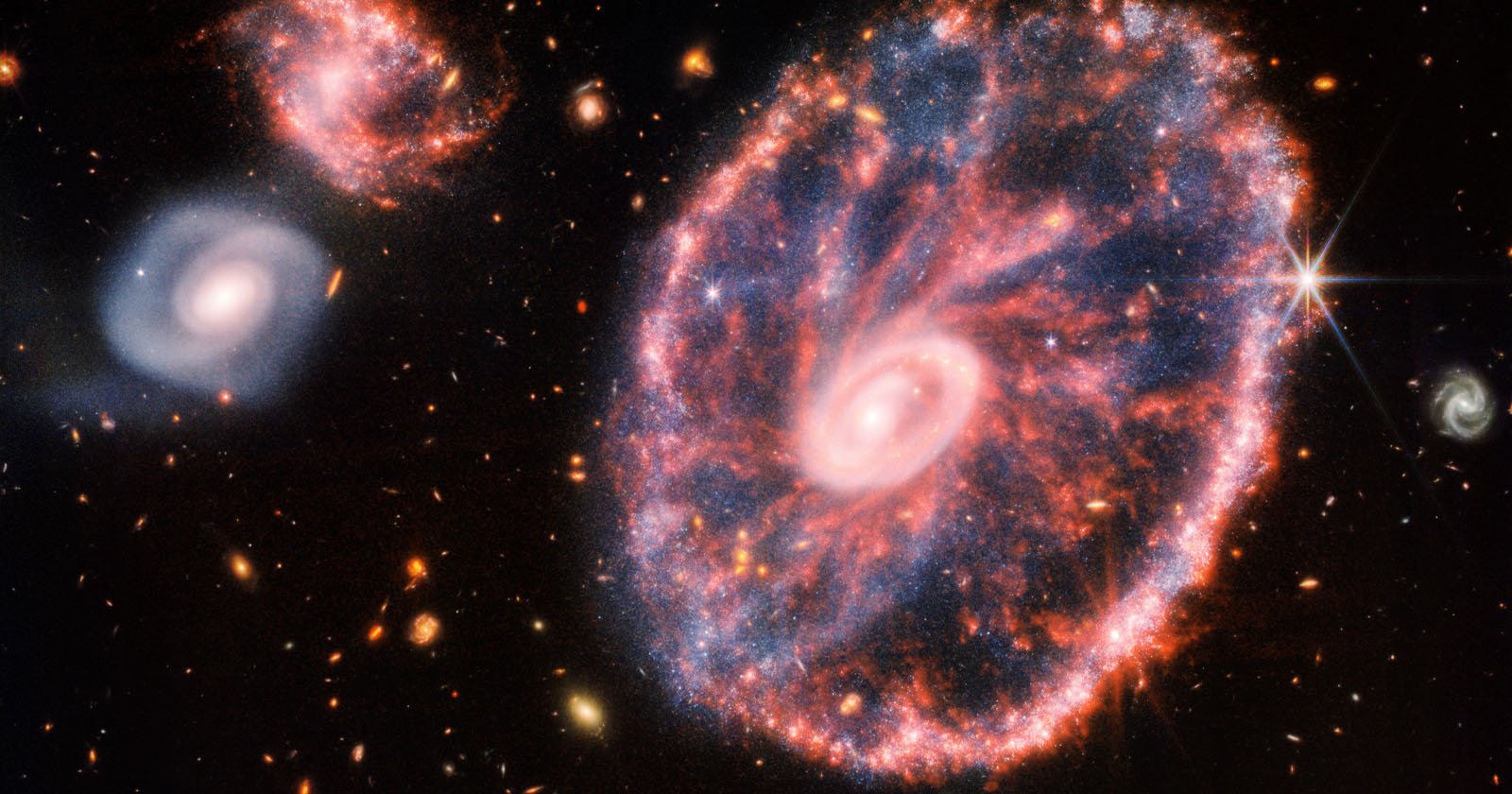 The European Space Agency (ESA) has published a video that puts into perspective just how far away the latest target of the James Webb Space Telescope (JWST), the Cartwheel Galaxy, is.

On August 2, the Webb Team published a gorgeous high-resolution photo of the Cartwheel Galaxy, a rare ring galaxy that was formed as a result of a collision between a large spiral galaxy and another smaller galaxy.

” This composite image of Cartwheel Galaxy and its companion galaxies was taken by Webb’s Near-Infrared Camera and Mid-Infrared Instrument. It reveals details not possible to see from the individual images,” ESA explains.

The galaxy, which astronomers believe was presumably a normal spiral galaxy like the Milky Way before its collision, will continue to transform.

” Webb’s observations show Cartwheel at a transitory stage. It is unknown what form the Cartwheel Galaxy will take given these competing forces. However, this snapshot provides perspective on what happened to the galaxy in the past and what it will do in the future.”

The video above starts with a wide view of space before slowly zooming in to one area and revealing the gorgeous galaxy, which puts into perspective just how far away the JWST is capable of looking into the universe.

The Cartwheel Galaxy is located about 500 million light-years away in the Sculptor constellation and even amongst the huge number of celestial objects in the sky, its appearance is a rare sight. It is the shape of a wagon wheel, and it was formed by the collision. Because of these distinctive features, astronomers call this a “ring galaxy,” a structure less common than spiral galaxies like our Milky Way.

“The bright core contains a tremendous amount of hot dust with the brightest areas being the home to gigantic young star clusters,” the Webb team explains. “On the other hand, the outer ring, which has expanded for about 440 million years, is dominated by star formation and supernovas. As this ring expands, it plows into surrounding gas and triggers star formation.”

Webb is able to resolve much more detail than Hubble, which is visible in a comparison between two images of the Cartwheel Galaxy captured by each.

Turn the lights up

Check out the Cartwheel Galaxy as seen by @NASAHubble in visible light and Webb in infrared. Complimentary views from complementary telescopes! Download both images in full-resolution below

“Webb’s high-precision instruments resolved individual stars and star-forming regions within the Cartwheel, and revealed the behavior of the black hole within its galactic center,” the Webb team says.

“These new details provide a renewed understanding of a galaxy in the midst of a slow transformation.”