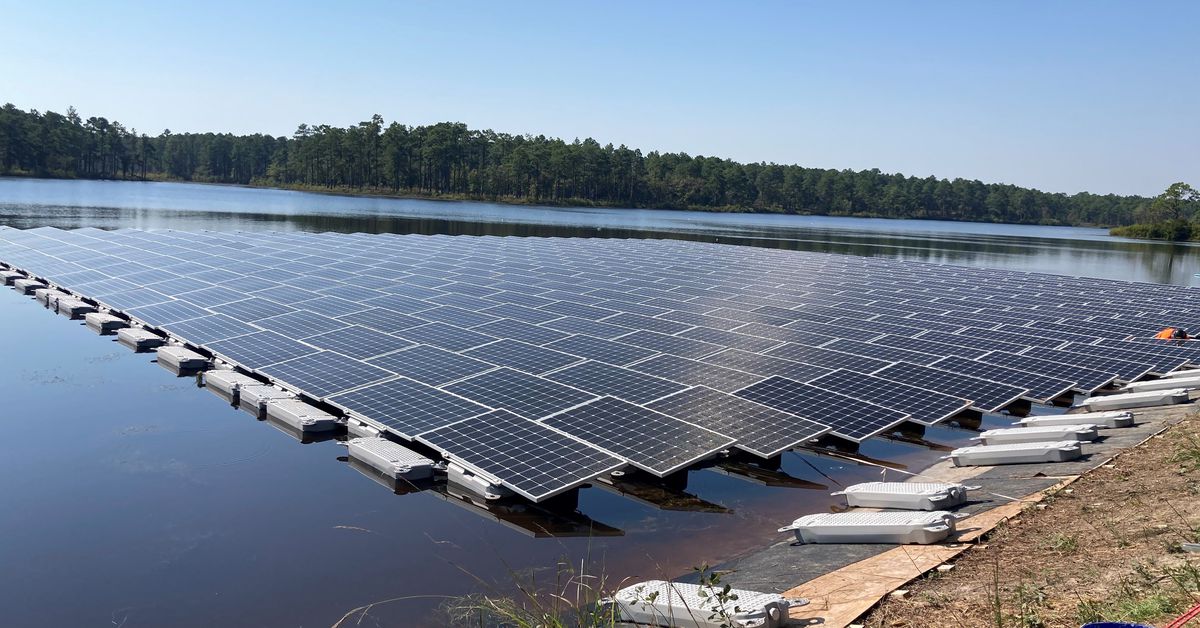 Floating solar had a moment in the spotlight over the weekend when the US Army unveiled a new solar plant sitting atop the Big Muddy Lake at Fort Bragg in North Carolina. It’s the first floating solar array deployed by Department of Defense, and it’s part of a growing current of support in the US for “floatovoltaics.”

The army says its goal is to boost clean energy, reduce greenhouse gas emissions, and give the nearby training facility a source of backup energy during power outages. The panels will be able to generate about one megawatt of electricity, which can typically power about 190 homes.

The installation, the largest in the US Southeast, is a big win for floatovoltaics, which have yet to make a big splash in the US. They only make up 2 percent of solar installations annually in the country, according to Duke Energy, which collaborated with Fort Bragg and the renewable energy company Ameresco on the project.

Upfront costs for floating solar have typically been slightly more expensive than for its land-based counterparts. The solar panels are essentially tethered at the bottom of the water body on a type of raft. However, floatovoltaics has its own unique advantages. Higher temperatures make it more difficult for solar panels generate as much electricity from the same amount. Luckily, sitting atop water has a cooling effect, which allows the panels to generate more electricity than panels on land. That makes floating solar more efficient and makes up for higher installation costs over time.

And while solar in general has already become the cheapest electricity source globally, it’s pretty land-hungry. A solar farm might take up 20 times more land than a fossil fuel power plant to produce a gigawatt of electricity. Solar projects in the US have already run into conflict with some farmers who want to use the same land, for example, and with some conservationists worried about the impact on desert ecosystems.

Floatovoltaics, in contrast, might be able to avoid some of those tensions. In the US, they’re more common on human-made bodies of water like reservoirs or canals. These are easier to build on and are less likely to have as big of an impact on sensitive ecosystems as installations built on natural ecosystems like deserts. Covering just 10 percent of the world’s hydropower reservoirs with floatovoltaics could generate as much electricity as all the world’s operating fossil fuel power plants combined, as researchers pointed out in a recent commentary in the journal Nature. Additionally, the panels can reduce evaporation which is a significant benefit in areas with low water levels. Drought-stricken California is even piloting a project to line irrigation canals with solar panels.

All this has the potential to help solar gain a stronger foothold in the US. Solar still only makes up just under 3 percent of the US’s electricity mix. Wind power accounts for about three times as much electricity in the US. But floating solar has already made a splash outside of the US, especially in places with less abundant land, like Japan. All renewables must be scaled up to achieve the US and international climate goals. The Biden administration has set goals of getting to a 100 percent clean energy power grid by 2035 as well as reaching net zero greenhouse gas emissions by 2050. This is what the global climate agreement calls for to meet its targets.

The US Department of Defense is one of the biggest polluters on the planet, with the US military releasing more greenhouse gas emissions annually than some 140 nations. So the new floating solar plant at Fort Bragg is sorely needed as a source of clean energy. In February, the US Army released its own “climate strategy” for reaching net zero emissions by the middle of the century.

Tackling climate change is in the army’s own self-interest, too. According to the army’s climate strategy, “For the immediate future, climate impacts are expected to disrupt Army activities.” This includes the possibility of power outages. Fort Bragg’s new floatovoltaic array is also equipped with a 2-megawatt battery for just such an emergency, such as, say, if a hurricane knocks out power to the area. The army wants “enough renewable energy generation and battery storage capacity to self-sustain its critical missions” on all its installations by 2040.

The post US Army deploys its first floating solar array appeared first on The Verge.