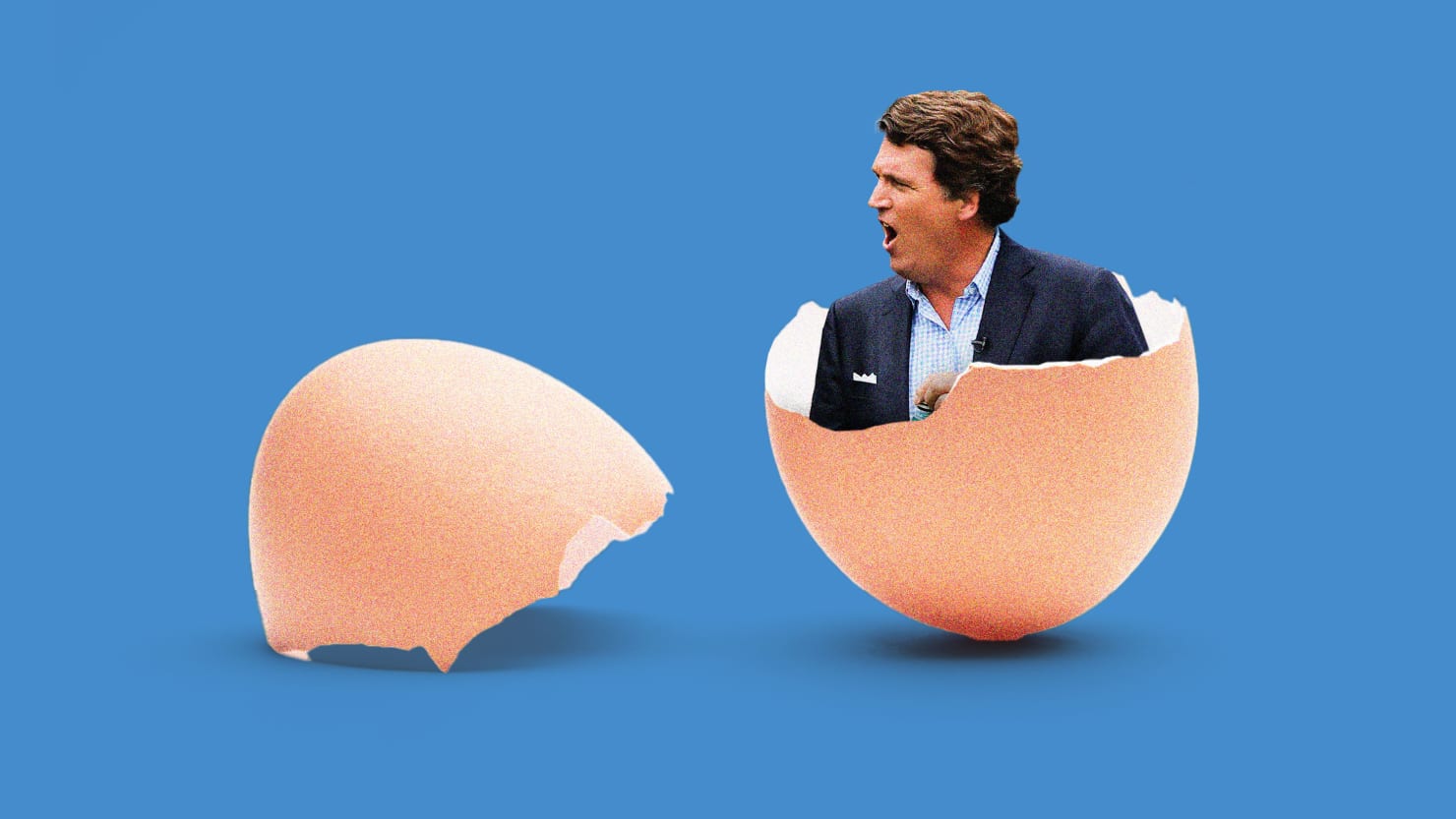 Right-wing pundits, politicians, and internet trolls have spent the past decade bemoaning what they believe is a cataclysmic crisis of masculinity in America. This crisis is evident in mass shootings obesity rates and NFL players wearing pink to support breast cancer research.

The latest call to save the male comes from Tucker Carlson, one of its most vocal proponents, who recently released an Ancient Aliens-styled documentary titled, End of Men. It’s the latest episode of his Fox Nation series, Tucker Carlson Originals–a collection of screechy culture war short docs.

Over its thirty-four minute runtime, End of Men highlights a focus group of far-right figures–like the Pizzagate proponent Mike Cernovich and an anonymous internet troll who calls himself Raw Egg Nationalist–who have distilled the insecurities which fuel their right-wing masculinity complex into something they call “bro-science.” According to Carlson’s panel of experts, it is bro-science that will save us from the crisis of endangered masculinity.

Bro-science, most impressively, supersedes real science. At one point in End of Men, Cernovich claims that “most doctors aren’t real scientists.” The scientific method be damned, the bro-scientists rely entirely on anecdotal evidence. Carlson claims that the bro-scientists are “experimenting on ourselves and posting the results on-line.” This includes shining red light machines on their testicles and drinking raw eggs. They also shoot big guns to extract their testosterone.

It becomes apparent immediately after the bro-scientists appear on screen that their field of study isn’t just about rejecting the ivory tower experts who read books and submit their theses for peer review–bro-science is also about creating a safe space where “real men” can claim their superiority, insulated from the cruel world of facts and data.

The bro-scientists are petrified by something they call “soy globalism”–a vast conspiracy that puts a nameless cabal at the helm of everything Carlson and his hyper-nationalist panel of science-bros fear and despise. In End of Men, behind every mask is a soy globalist–an ideology defined by Raw Egg Nationalist as “own nothing, live in the pod, eat the soy.” Its proponents are never identified–they are a faceless entity, two trigger-words signifying nothing.

The documentary claims that the soy globalists’ ultimate goal is to decrease the testosterone levels of American men. Raw Egg Nationalist says this is “to control you and to maximize your economic value before they kill you.” And the soy globalists are winning, according to the documentary, which claims the average testosterone levels have declined noticeably in the past half century.

Here is the speck of truth in Carlson’s fever dream–reputable studies have shown testosterone rates are declining, even if “soy globalism” isn’t the actual culprit.

Real scientists have proposed a number of factors for the decline in testosterone: the rising obesity rate, the drop in smoking (which boosts your testosterone), and the increased prevalence of endocrine-disrupting chemicals found in things like food packaging and herbicides.

So how does End of Men propose we fix this testosterone crisis, this calamity for masculinity?

According to Carlson’s leading bro-scientist, Raw Egg Nationalist, you eat raw eggs. You take cold showers, you shine red lights on your testicles. The soy globalists want you to eat their soy, he adds, pointing out that “you can’t patent an egg” and asserting that an egg is “the absolute opposite of the disgusting rubbish the globalists want you to eat.” (This would be a good time to note that Raw Egg Nationalist publishes his raw egg cookbook through a tiny publishing house with a catalog dominated by Nazi-sympathetic titles–like a newly translated edition of the Third Reich’s fitness manual and a three-part biography of Horst Wessel, a Nazi storm trooper made into a martyr by Hitler’s chief propagandist, Joseph Goebbels. )

The pseudonymous troll claims his raw egg wisdom “is substantiated in all sorts of studies”–and screenshots of a few studies briefly flash across the screen. One study titled, “Low-fat diets and testosterone in men: systematic review and meta-analysis of intervention studies,” is even highlighted.

The co-author of that study, Joseph Whittaker, told The Daily Beast that men hoping to boost their testosterone should “avoid low-fat diets.” But instead of the “organ meat” and “raw milk” recommended by Raw Egg Nationalist, Whitaker recommended zinc-heavy foods like “red meat, oysters and pumpkin seeds.”

When asked about the raw egg diet, Whittaker said, “raw egg whites contain a substance called avidin, which prevents biotin (a B-vitamin which allows your body to process fats) absorption, so I would avoid raw eggs. You can have the yolks runny, but the whites should be cooked.”

“Turek is asked, ‘Would you recommend young men to tan their balls?’–but before the dumbfounded doctor is able to answer, the documentary cuts away to a montage of shirtless men shooting guns and milking cows.”

That leads us to the real headline-grabber of End of Men: “ball-tanning.”

This is part of the bro-science hypothesis that using red-light therapy on your testicles will increase your testosterone. The self-described “right-wing bro-scientist” who advocates for ball-tanning in Tucker’s documentary explains, “the bro-science behind ball-tanning is generally that it feels good so do it–the bro-science behind it is based on very real science that’s emerging.” This commentary is juxtaposed with excerpts of a study published in 1939–which hardly constitutes “very real science that’s emerging.”

The sole medical professional featured in Carlson’s documentary is Dr. Paul Turek, a physician who specializes in men’s reproductive health. In the first minutes of the documentary, Turek is asked, “Would you recommend young men to tan their balls?”–but before the dumbfounded doctor is able to answer, the documentary cuts away to a montage of shirtless men shooting guns and milking cows.

Because the entire premise of posing a health question to a doctor is to hear his answer, and because Turek is one of a very few reputable figures in End of Men, I asked him if he would recommend that young men “tan their balls.” Turek told me “there is no hard data that testosterone levels are boosted with ball-tanning.” In fact, he says “ball-tanning” is likely detrimental to sperm and testosterone production, explaining, “we know from the effects of fevers and hot baths that sperm production drops like a brick when the testicle heats up. Tanning your balls is another ‘wellness trend’ at its finest that is likely destined to die on the vine.”

But End of Men, of course, isn’t about science, it’s about the insecurities of men in the vein of Donald Trump–who felt the need to defend the size of his penis during a 2016 Republican debate. Trump, Carlson and other “bro-scientists”, live in a world where they are victims. (Fox News, however, is exempted from the theory, even though it’s owned by a huge international corporation. )

And with their fears exploited, with people like Tucker Carlson telling them that the world is out to get them, the insecure bros featured in End of Men don’t engage in any self-reflection or seek to understand their place in an ever-evolving world.

Instead, they embrace nonsensical conspiracy theories, create fictional bogeymen, and reach for outlandish solutions in hopes of regaining some imagined notion of masculinity. To battle the soy globalists out to destroy men, they do things like chug raw eggs and tan their testicles–manly, science-y stuff indeed.

The post Tucker Carlson’s New Testicle-Obsessed Documentary Is a Feat of ‘Bro Science’ appeared first on The Daily Beast.