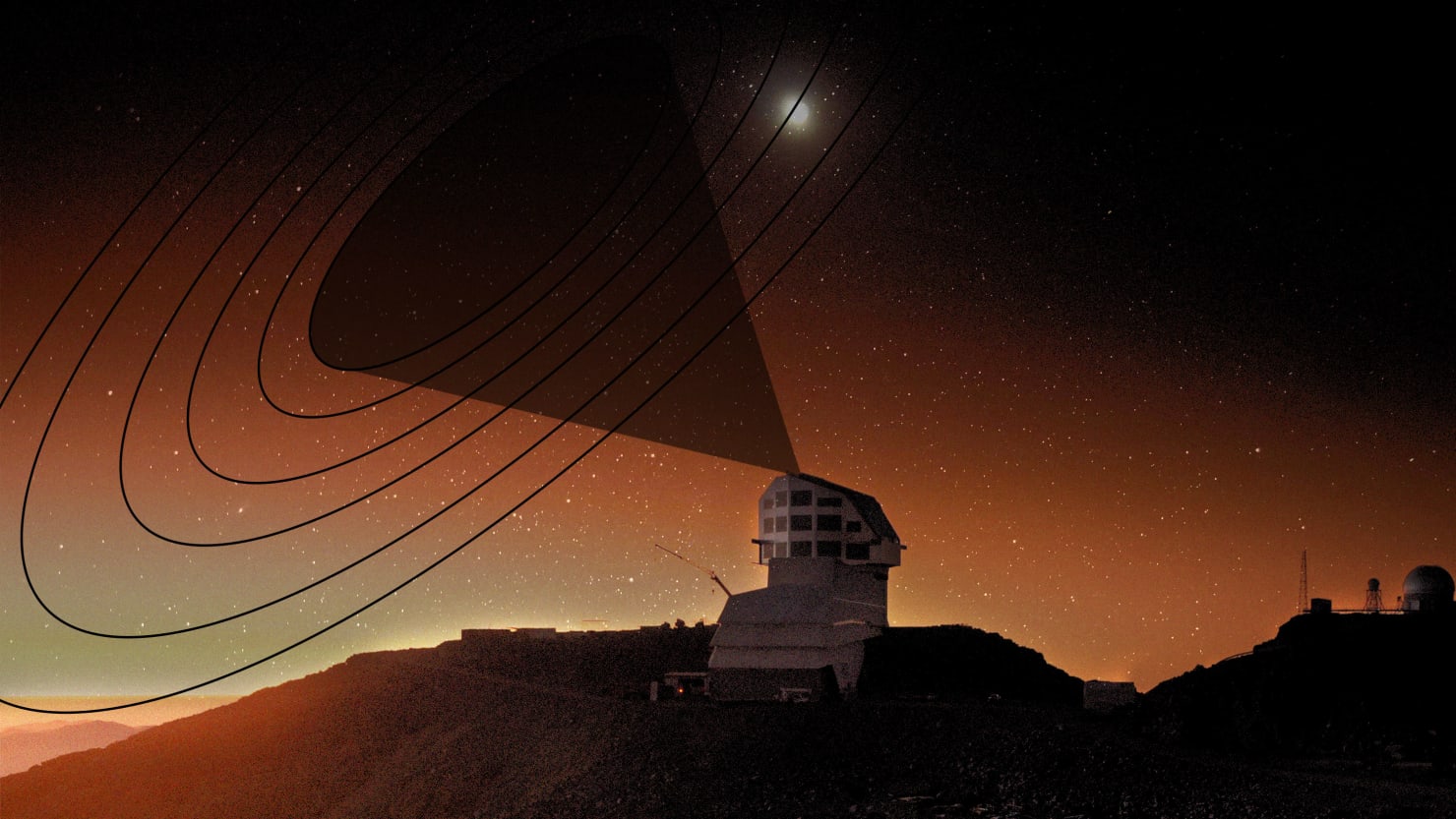 NASA’s James Webb Space Telescope was a huge boon to space science when it launched into orbit on Christmas Day last year. But the $10-billion JWST, for all its amazing capabilities, only sees a small sliver of the sky at a time–and only in a particular spectrum. The infrared spectrum.

That’s why scientists are so excited by the next big thing in giant telescopes. The Vera Rubin Observatory, perched atop an 8,900-foot mountain peak in northern Chile, is on track for completion in late 2023. The U.S. National Science Foundation has poured $300 million into the observatory’s construction since 2007. Private investors also made contributions.

The Rubin Observatory’s 28-foot-diameter telescope and 3. 2-gigapixel camera see a huge swathe of the sky in the optical spectrum. Basically, the same part of the spectrum we see with our own eyes.

Think of JWST and Rubin as partners. “They are complimentary,” Ranpal Gill, the observatory’s communications director, told The Daily Beast. “Rubin is optical with a large [field of view], JWST is infrared with a smaller FOV.”

Ideally, the two telescopes will work together once Rubin starts taking its first photos, a few months after construction wraps. Because it scans across a 3. 5-degree arc–that’s a field of view a hundred times wider than JWST’s–Rubin can see the big picture across the entire southern sky. Tell JWST which direction to point its infrared sensor. This can be used to determine the object’s temperature or material composition. Gill stated that it is possible to discover objects of interest for JWST.

Just because the two telescopes can work together doesn’t they have to, however. Scientists are already brainstorming what they’re going to do with Rubin–by itself or in conjunction with JWST–starting a little over a year from now.

Inspecting comets. Searching for a hypothetical ninth planet orbiting way out there in the dark of the outer solar system. One physicist has identified strange interstellar objects which he believes to be alien craft. The list goes on.

“I think that it’s fair to say that Rubin will be as transformative a telescope system as JWST,” Pedro Bernardinelli, a University of Pennsylvania astronomer, told The Daily Beast. “The key idea, though, is that they do very different things: JWST allows us to measure things really well in the infrared, while Rubin will allow us to map large areas of the sky to incredible depths and really fast, so we’ll not only see what is out there, but how these things are changing in time.”

Bernardinelli said he’d focus Rubin on the smaller, speedier and weirder objects in the solar system; as well as the bigger, slower and equally weird objects that lie far beyond the solar system. Up close: comets and asteroids. Far away: flickering “variable” stars and supernovae.

One near-term priority should be the Bernardinelli-Bernstein comet, Bernardinelli said. Potentially 100 miles wide, Bernardinelli-Bernstein–“B-B,” as it’s known–might be the biggest comet a human being has ever observed. It might also be the most pristine, because it’s spent most of its multi-billion-year existence in the deep dark cold of the outer solar system, where nothing can touch it or melt it.

“I think that it’s fair to say that Rubin will be as transformative a telescope system as JWST.”

And as readers probably ascertained, the comet is named in part for its co-discoverer, Bernardinelli himself. “Not a lot has happened to this object since its formation in the early days of the solar system,” he said, “and so we can think of it as a window into the past.”

Bernardinelli and his partner Gary Bernstein, also a University of Pennsylvania astronomer, first glimpsed B-B back in 2014 and, since then, have pieced together fleeting observations with smaller telescopes to make a few educated guesses as to the comet’s composition. It’ll take a much closer inspection to say for sure what Bernardinelli-Bernstein looks like–and what it can tell us about the early history of the solar system.

Rubin could be just the thing. “When the Vera Rubin Observatory starts its mission in 2023, it’ll take lots and lots of images of this and other objects, so we’ll basically have a ‘video’ of its evolution for almost 10 years.”

Konstantin Batygin, a Caltech astronomer, wants to aim Rubin at the possible hiding spots of the legendary ninth planet. Or tenth, if you side with the large community of astronomers who believe the old ninth planet, Pluto, never should have gotten a downgrade to “non-planetary object” back in 2006.

A year before the Pluto kerfuffle, another Caltech astronomer named Mike Brown and his team detected an object lurking in the darkness of the Kuiper Belt, a ring of comets, asteroids, and ice that’s so vast and so far from the sun that it’s still mostly a mystery.

This object appears to be much bigger than Pluto. NASA initially described this object, which came to be known as “Eris,” as the solar system’s potential 10th planet. Then it became the ninth planet, after Pluto’s controversial delisting.

It’ll take some pretty convincing observations to get the whole astronomical community behind Eris as an official replacement for Pluto. Rubin might be able to do it again. Batygin stated that the new telescope would “provide an enormous boost to this hunt.”

As controversial as the hunt for the new ninth planet is, one project Harvard physicist Avi Loeb has in mind for Rubin could get even more heated. Loeb is arguably the most vocal proponent of a comprehensive search for alien craft in our own galactic neighborhood.

Five years ago a very strange object made a very strange journey across the solar system. Shiny, reddish in color, oblong, somewhere between 300 and 3,000 feet in length and moving at a blistering 16 miles a second–the object zoomed into our system and past the sun. When Canadian astronomer Robert Weryk first noticed the thing in a telescope survey in October 2017, it was already on its way out of our system.

Astronomers were baffled by this object, which they named “‘Oumuamua.” That’s Hawaiian for “scout.” No one knew for sure what ‘Omuamua is–or isn’t.

Only Loeb was willing to say what others may only have been thinking. ‘Oumumua’s speed, course and shape were possible signs it’s an alien craft. “The possibility of an artificial origin for ‘Oumuamua must be considered,” Loeb wrote in a 2021 study.

It’s too late for a close observation of ‘Oumuamua. But if there are other alien craft out there, Rubin could help astronomers spot them in time for a detailed inspection. Loeb stated that the new telescope will allow them to see more interstellar objects.

With Rubin to widen and focus our view, possible alien ships wouldn’t have to be hundreds of feet long to be visible from Earth. In fact, they could be as small as a microwave-sized cubesat satellite and still show up in Rubin’s scans.

There are probably lots of interstellar objects that size passing through the solar system at any given time. “For every ‘Oumuamua-sized object on the scale of a football field, there are a million objects on the scale of CubeSats,” Loeb said. If you believe Loeb, each one is a possible extraterrestrial vessel.

And even if these visitors from another star system aren’t aliens, they’re still worth examining. There are a handful of telescopes capable of detecting interstellar objects (or “ISOs”), but they produce fuzzy, imprecise images. Ravi Kopparapu (an astronomer from NASA’s Goddard Space Flight Center, Maryland) said that a telescope such as Vera Rubin Observatory could be more sensitive to interstellar objects.

After initially detecting a possible interstellar visitor with Rubin, astronomers could point the JWST at the same object. This would allow us to see the object with our naked eyes, and also view it in infrared.

The same teamwork–Rubin finds things first, JWST zeroes in–could begin to define astronomy after 2023. Kopparapu stated that humanity will use two eyes to view the universe.

The post This Single Telescope Might Find Hidden Planets and Alien Spacecraft appeared first on The Daily Beast.