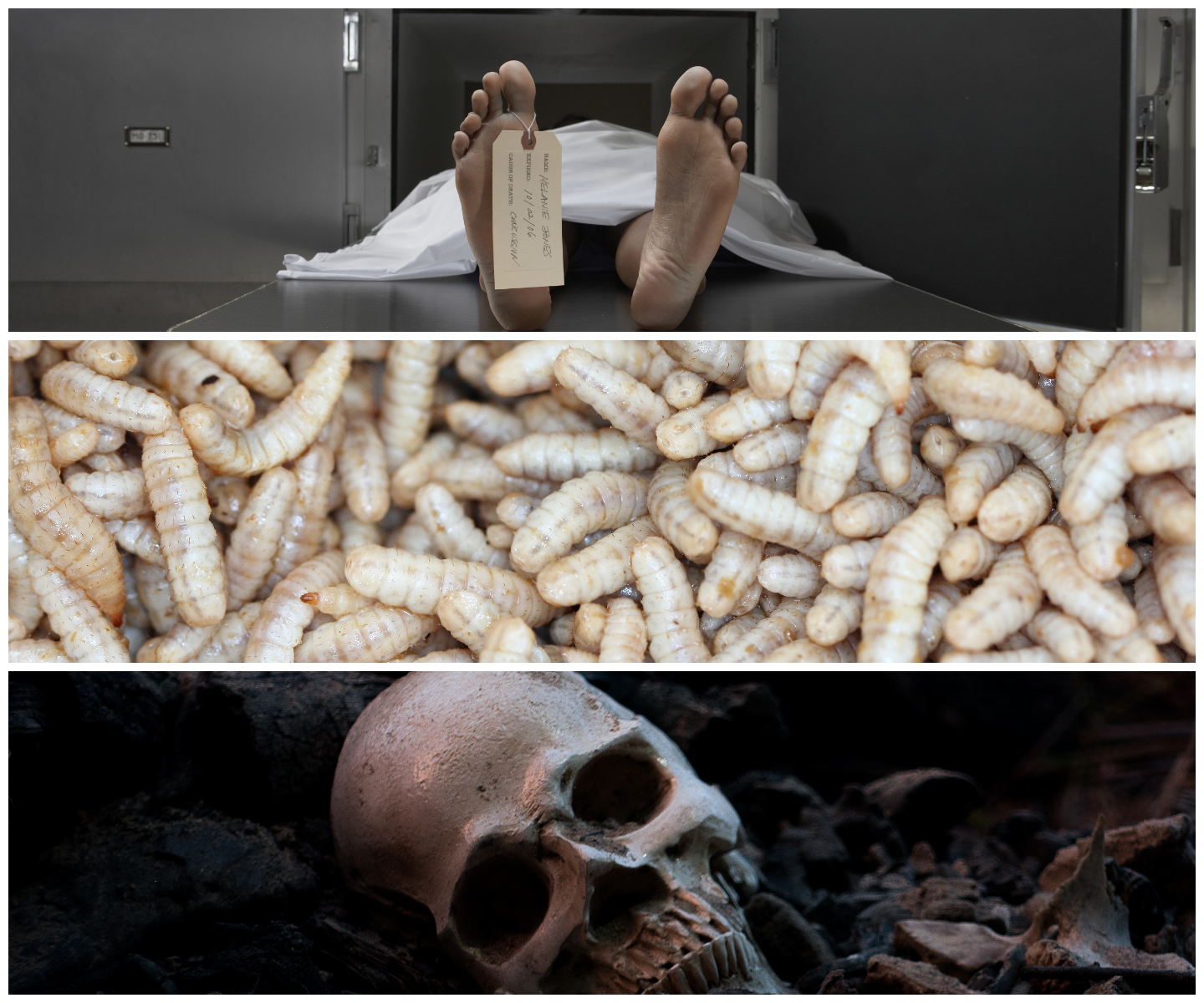 The one universal truth is that every living thing eventually dies.

It may seem like a terrifying prospect, a great unknown, but by learning about every stage of the process, we can take some of the mystery out of our final moments, and what happens to our bodies afterwards.

What Happens in the Hours Before Death?

For someone who has been approaching death due to age or ill health, their body will slowly begin to shut down. In the weeks prior, they may experience greater fatigue and lose their appetite, while in the days before, they may lose control of their breathing. Some people have a burst of energy in their final days or hours hours, before growing more tired.

“Prior to death, body temperature may increase or decrease depending on the conditions of the patient. The patient may also experience hypostasis, which is the settling of blood in the dependent areas of the body,” Mark Evely, director of the mortuary science program at Wayne State University, told Newsweek.

They may also experience symptoms consistent with a near-death experience, which can also be experienced by people coming close to death but surviving, such as after cardiac arrest or traumatic brain injury.

Neil Dagnall, a cognitive and parapsychological researcher at Manchester Metropolitan University in the U.K., told Newsweek: “While researchers disagree on the exact stages, there is consensus regarding the key features. There are four main features: feelings of contentment and peace, as well as psychic separation from the body. Not all experiencers pass through all stages, and stage order is not fixed.”

When a patient reaches the end of their life, their heart will stop and they will cease breathing, and within a few minutes their brain will have stopped functioning. This may be different for different people depending on the exact cause of death, however, as specific injuries may cause the body to fail in different ways.

How Long Does the Body Live After Death?

“Some tissues and organs will continue to function for a limited time after a person has stopped breathing, but only until oxygen levels are consumed and then these tissues and cells will die too. This will occur in a matter of seconds and minutes,” Philip Barton, an insect decomposition ecologist at Federation University Australia, told Newsweek.

There has been a great degree of speculation as to how far this extends in terms of the brain: if a person is decapitated, how long are they conscious for? This idea was spurred by victims of the guillotine appearing to show emotion on their faces post-separation, as well as the tale of Mike the chicken, who stayed alive for 18 months after his head was removed, leaving only a small chunk of brainstem behind.

After the tissue is starved of oxygen, however, death and decay truly begin to set in, with decomposition beginning around 4 minutes after death.

What Are the Stages of Decomposition After Death?

“After death, the body undergoes physical and chemical changes. Dehydration, livor moris and the endogenous invading of microorganisms are some examples of physical changes. Chemical changes include rigor mortis and decomposition,” Evely said.

The body’s cells start to break down and explode in what is called autolysis. After that, the organs begin swelling because bacteria produces gasses. The larvae begin breaking down soft body parts and laying eggs. This digestion creates several volatile compounds including putrescine and cadaverine, which are characteristic of the “smell of death.”

“The major things that drive [rate of decomposition] are temperature, humidity and insect activity,” Patrick S. Randolph-Quinney, an associate professor of forensic science at Northumbria University in the U.K., previously told Newsweek.

The rate of decay also depends on the person’s clothing or degree of protection from the elements, which can create vastly different decomposition rates on different parts of the body.

“I’ve seen a case in South Africa, where a body was found in a suitcase that had floated down a river,” Randolph-Quinney said. Some of the body was mummified and some were skeletonized. It was quite unpleasant. So, you can have all those things going on in the same kind of environment.”

Once most soft tissues have been digested and the larva have nothing else to eat, chewing insects will gnaw at the tougher ligaments and cartilage left behind. The bones will eventually disappear, and the environment may cause them to crumble.

Occasionally, in extreme environments, bodies may mummify rather than decay if they lose water from heat or freezing before the tissues digest, or if they are preserved in an anaerobic environment like a bog, preventing oxygen-breathing bacteria and insects from accessing the body.

“What you’re looking for is something extreme,” David H. Thomas, an archaeologist with the American Museum of Natural History in New York City, told The New York Times. “It has to be really dry, or really wet, or really frozen, or really high elevation.”

This explains why sometimes bodies are discovered as bones after only a few years, while others are nearly perfectly-preserved mummies after thousands.

In modern funerals, many people opt to be cremated, during which the body is exposed to temperatures of 1400 to 1800 degrees Fahrenheit. The body is dried, the soft tissue evaporates, and the bones are calcified. The body will be reduced to a few fragments of skeleton, and then the family can remove the ash.

The majority of others choose to be buried in the ground, where their bodies will experience the same processes of decomposition as billions of humans before, and after, them.

Is there a health issue that’s worrying you? Do you have a question about death? [email protected] Let us know. We will be happy to help you with your questions and could feature your story on Newsweek.

The post This Is What Happens to Your Body When You Die appeared first on Newsweek.