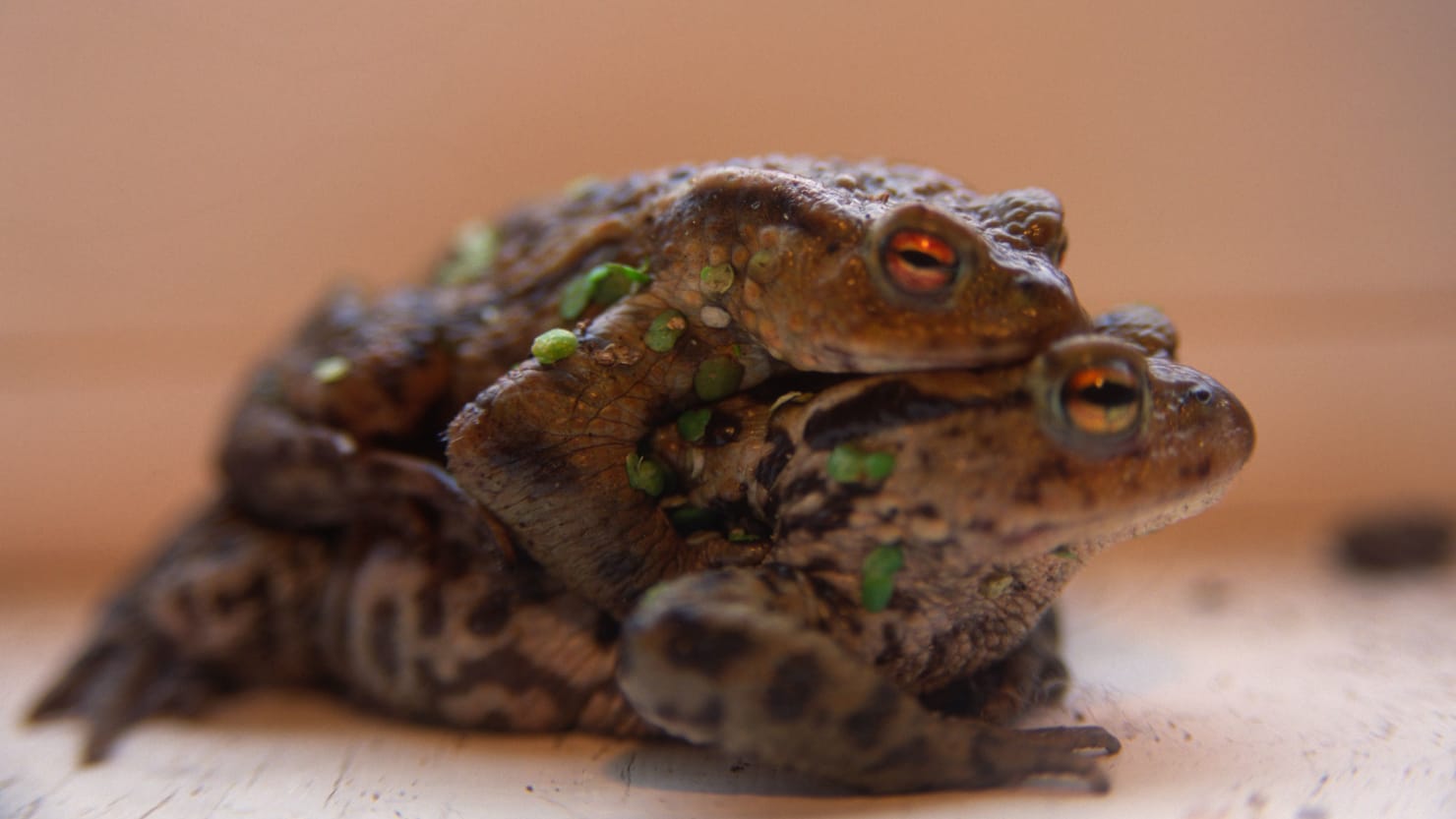 Frogs once lived alongside dinosaurs. About 45 million years ago, the North Sea covered half of Germany. It’s incredible to think these little creatures survived the dinosaurs’ extinction. But a lower level mass death did take place in what is now called the Geiseltal region in central Germany and the cause has long remained a mystery.

Hundreds of frog fossils were found in a mass grave in Geiseltal’s 45 million-year-old swampy coastlands, and their reason for being there has confounded scientists for decades. But my team’s study found an explanation: they died from exhaustion while mating.

We also found evidence the mating behavior of modern frogs and toads dates back at least 45 million years as mass grave frog fossils from other sites show similar features on the skeletons as the Geiseltal specimens.

My Irish-German research team studied the fossil frog skeletons. We paleontologists took photos, made drawings and analyzed the fossils. We checked how many bones were still in place and which bones and joints were still attached.

With this data we were able to reveal what happened to the frog skeletons after their death and to interpret the reason for their death. Our research also found many skeletons in one sediment layer which showed that most of the fossilized frogs died in mass mortality events (recurring events during which many hundreds of frogs died in a short time).

Other scientists thought the Geiseltal frogs and toads died when lakes dried up and oxygen levels decreased rapidly. But our research showed this was unlikely as the frogs could have easily made their way to nearby water bodies. We also found evidence the frog carcasses floated in the water for some time before they sank to the lake bottom. So the lake didn’t dry out.

Our comparisons of Geiseltal skeletons with modern frogs revealed most Geiseltal frogs were actually toads. Toads follow a land-based lifestyle, except when they return to ponds to mate. They mated with numerous other toads during the very short mating season which, in some modern tropical species, lasts for just hours.

Sex can be a death trap for modern toad and frog species. Individuals are regularly overcome by exhaustion and drown. Female frogs and toads are at higher risk of drowning as they are often submerged underwater by one or more males. Even today, mass toad graves are found on migration routes and near or in mating ponds. This was likely to be the same situation for the Geiseltal specimens.

The carcasses were moved by light currents in the swampy lakes and sank to the bottom in the cold, deep, and undisturbed regions of the lake. The cold temperatures (probably about 8℃) prevented decay and kept many skeletons in good condition. In some skeletons even small bones such as finger bones or toe bones are still well defined.

Some frogs may have frozen to death, died from diseases or from old age. That’s information the frogs took to the grave with them as these three causes of death are difficult to verify. But after months of studying these fossils and analyzing what we know about their lifestyles my team came to an astonishing conclusion.

The most likely explanation for why there are several groups of frogs, each numbering in the hundreds, that died almost at the same time in different ponds, is that their enthusiastic mating killed them. It explains why similar mass graves have been found in different parts of the world.

The German Geiseltal fossil collection was closed for decades but recently reopened to the public and scientists. It is an incredible time capsule of over 50,000 fossils from a former lignite (brown coal) opencast mine in the Geiseltal.

The fossils include crocodiles, huge snakes, flightless giant birds and dog-sized primeval horses. Many of the Geiseltal fossils are so well preserved they show remarkable details including bones, scales, skin, internal organs and gut contents.

The mine was flooded to create a recreational area in the early 2000s and is a giant lake now.

While these mating deaths sound extreme, a far more common cause of frog and toad mortality is humans destroying their homes, polluting water sources and spreading disease.

Frogs and toads survived several climate changes and extinction events on earth. However, some species have gone extinct. In 2021 one of the few remaining frog species of an ancient lineage of amphibians was declared likely extinct, having not been seen in 60 years.

A 2019 UN report showed amphibians, particularly frogs, are among the hardest hit by the nature crisis. Frogs can migrate short distances if environmental conditions in their pond change. But they are vulnerable to disease, which can be driven by human impacts on nature.

Frogs and toads live nearly everywhere including on trees, in flowers, in the jungle and in the desert. Some look almost as colorful as a rainbow and others can even fly. Imagine these creatures feeding next to a T-Rex. It would be a tragedy if we lost any more species.

The post These Ancient Frogs F*cked Themselves to Death appeared first on The Daily Beast.