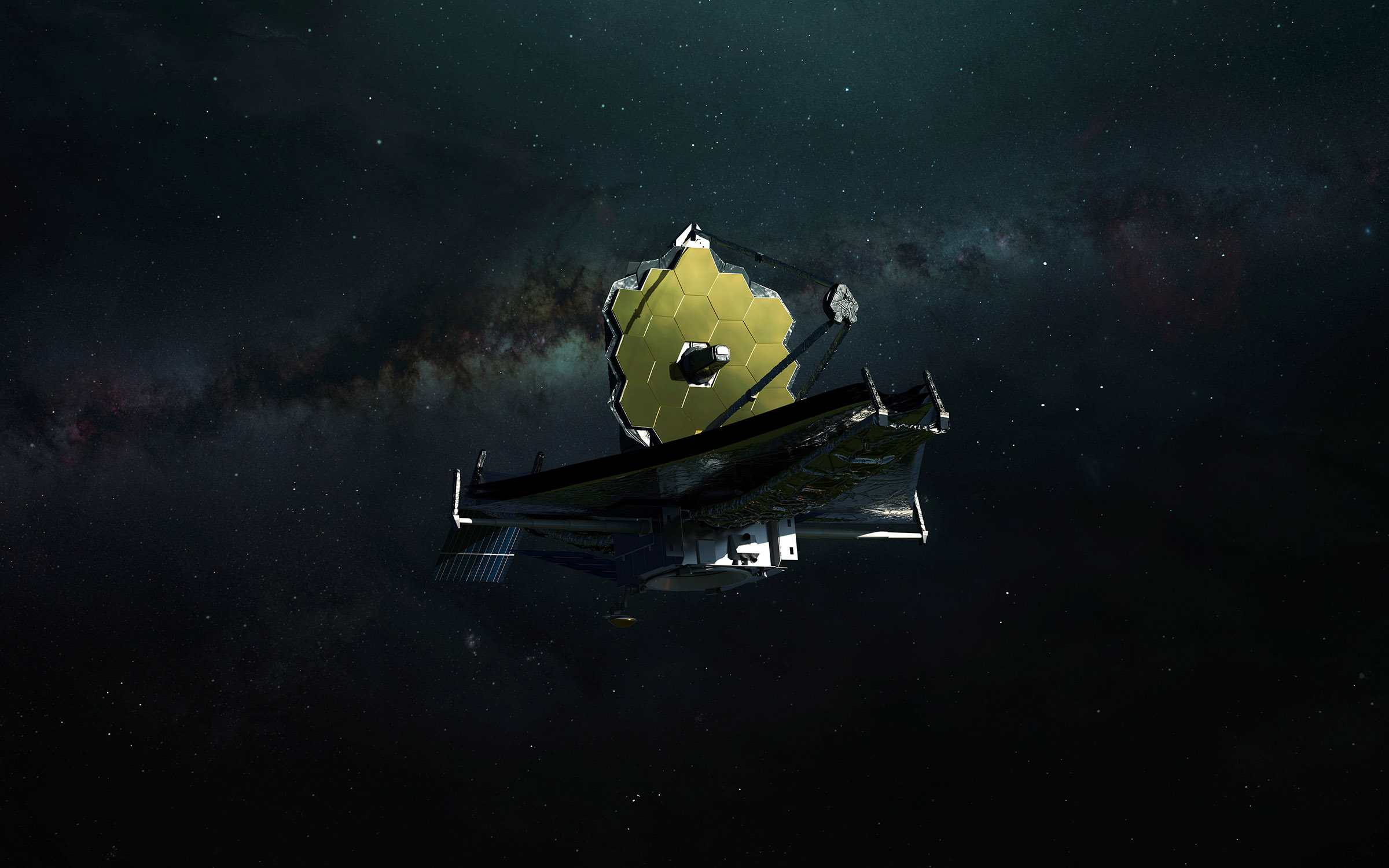 NASA’s James Webb Space Telescope (JWST) is the largest telescope in space. The telescope is an infrared observatory and was built to see deep into the beginning of the universe. Since the telescope’s launch in 2021, it has carried on a very storied legacy.

The James Webb Space Telescope launched from the European Space Agency’s Kourou launch site in French Guiana on December 25, 2021. NASA shared one of the last videos of Webb in January. After almost a month of travel, the powerful James Webb reached its final destination, more than a million miles away from Earth. NASA provided updates about James Webb’s progress from January through July. On March 16, NASA shared Webb’s first in-focus image, following up with news on April 28 that Webb was fully aligned and ready to get to work. In May, we finally got a look at another image captured by the James Webb Space Telescope, detailing the quality of Webb’s images.

It was around this time that NASA officials fully realized that we were working with a telescope that was going to change our understanding of the universe completely, with NASA and the ESA releasing news of some of the possible studies that Webb would undergo, including observations of two Super-Earths found within our galaxy.

In June, NASA revealed when we’d see the first full in-color images from James Webb. Shortly after announcing that those images would release in July, though, dire news was shared – a micrometeoroid had hit Webb. NASA wasn’t sure what this meant for the James Webb Space Telescope then, but we later learned that Webb suffered an uncorrectable change to one of its mirrors.

With NASA set to reveal Webb’s first images on July 12, the space agency revealed the targets of those first, crucial observations on July 10. Those targets would include the Carina Nebula, WASP-96b, the Southern Ring Nebula, Stephan’s Quintet, and a section of space known as SMACS 0723.

When the first images captured by the James Webb Space Telescope were released, though, they were far greater than anyone had expected. From there, Webb’s observations only continued to trickle out, with Webb detecting water on an exoplanet. The telescope proved to be more powerful than any other instrument scientists have ever used.

Observing Jupiter and a supernova

But the discoveries and observations made by the James Webb Space Telescope don’t stop with those first images of the early universe. Since those first images were released in July, NASA and the ESA have revealed other images. Members of the astronomy world have also released their images made from Webb’s data.

In mid-July, Webb images of Jupiter began to circulate, showcasing some of the first bits of data that the James Webb Space Telescope had captured. Around this same time, the space telescope also captured observations of its first supernova, offering a brief glimpse at part of the universe the telescope wasn’t even designed to look for.

From there, Webb’s observations and images have only continued to wow the minds of the space community for the past few months. August brought a dazzling photo of the Cartwheel Galaxy and Webb’s discovery of the most distant galaxy known to man. The James Webb space telescope also captured an image of two galaxies smashing together, a common but often unobserved galactic event. But, even though the images are stunning, it was difficult to capture the entire scope of the James Webb Space Telescope’s capabilities and display it publicly. That’s why the ESA set up a video back in mid-August, detailing Webb’s insane reach into the universe. One thing that makes the James Webb Space Telescope such a beloved instrument for astronomers has been its openness. All of the data that Webb has captured has been shared with the community, allowing astronomers of all types and renown to siphon through the terabytes of observations Webb has had.

In August, the Cosmic Evolution Early Release Science Study looked at Webb’s data, creating the largest Webb image at the time. That was shortly followed up by Webb’s image of the Great Barred Spiral Galaxy, 56 million light-years away from our planet.

More photos of Jupiter captured by the James Webb Space Telescope surfaced in August, showing dazzling auroras along the planet’s surface. Around that same time, scientists completed a spectrum on an exoplanet and detected carbon dioxide for the first time outside our solar system.

But August’s observations didn’t stop there. Near the end of the month, NASA shared a beautiful image of an Einstein Ring located 12 billion light-years from Earth, showcasing the clarity with which the James Webb Space Telescope can capture distant phenomena, even when they’re harder to see.

The space telescope ended August off with an image of the Phantom Galaxy, a beautiful spiral-armed galaxy 32 million light-years from Earth. While the images are beautiful, James Webb’s data has continued to baffle scientists, seemingly turning our understanding of how the earliest galaxies formed on its head entirely.

Orion, the Tarantula Nebula, and a wind binary

And September was just as busy for the new space telescope, with astronomers pulling images of a wind binary from Webb’s data early on, and the first direct image of an exoplanet we’ve ever taken. A photo of the Tarantula Nebula was also shared at the start of the month, with the James Webb Space Telescope capturing photos of a bizarre alien planet not long after.

Webb has also given us the most detailed view of the Orion Nebula we’ve ever seen. When compared to Hubble captures of the same region, we can truly see just how far the technology inside of the James Webb Space Telescope has advanced beyond NASA and the ESA’s original space telescope.

James Webb has also provided more insight on Mars, confirming data that other spacecraft have already observed. Although it’s not groundbreaking data or revolutionary, NASA scientists could benefit from this information to gain more knowledge about Mars.

September also brought some bad news for the James Webb Space Telescope, though, when a study suggested that scientists could be misreading the information that Webb had captured. The study argued that our current models and beliefs of how the universe work could cause us to misinterpret the data that Webb provides. It remains to be determined if this is something that we will soon fix.

September also brought news of a friction issue with the James Webb Space Telescope’s mid-infrared instrument (MIRI), which NASA has yet to provide any kind of update on. Even with MIRI out of work at the moment, though, Webb still managed to capture the clearest image of Neptune we’ve captured in decades, as well as an image of a spiral galaxy’s skeleton.

Back in October, James Webb turned its attention to a duo of stars known as Wolf-Rayet 140 (WR140). This rare kind of star and its companion garnered quite a bit of attention after Webb captured what appeared to be a fingerprint in space, the result of clouds of dust sent forth from the duo as they passed close to each other.

Later in the month, NASA released another image of the Pillars of Creation, this time revealing a haunting look at the way the iconic stellar entity looks in mid-infrared light. The image is quite the contrast from the usual, brighter colors we’re used to seeing, and it provided some insight into the pillars that we hadn’t considered before.

But Webb didn’t stop there. October also brought insight into a beautiful rainbow knot of galaxies as Webb peered over 11 billion years into the past. Further, scientists are keen to use Webb to search for even more answers to questions about the early universe, something astronomers have hoped to dig into more for decades.

Now, as we head into November, a glitch in Webb’s systems has been resolved, allowing the space telescope to prepare for important observations of Saturn, which astronomers hope will provide more details about the planet.

The James Webb Space Telescope is located more than a million miles from Earth and cost $10 billion to develop. It isn’t designed to receive any kind of repairs or service missions like Hubble has in the past. Because of this, every observation made by the telescope is vital. Any mechanical malfunction could result in everything being shut down.

And you can rest assured NASA, and the ESA will take advantage of every moment available. This powerful telescope has continued to blow the minds of scientists all around the world, and it doesn’t look like it is ready to stop anytime soon.

The post The ultimate guide to the James Webb Space Telescope appeared first on BGR.