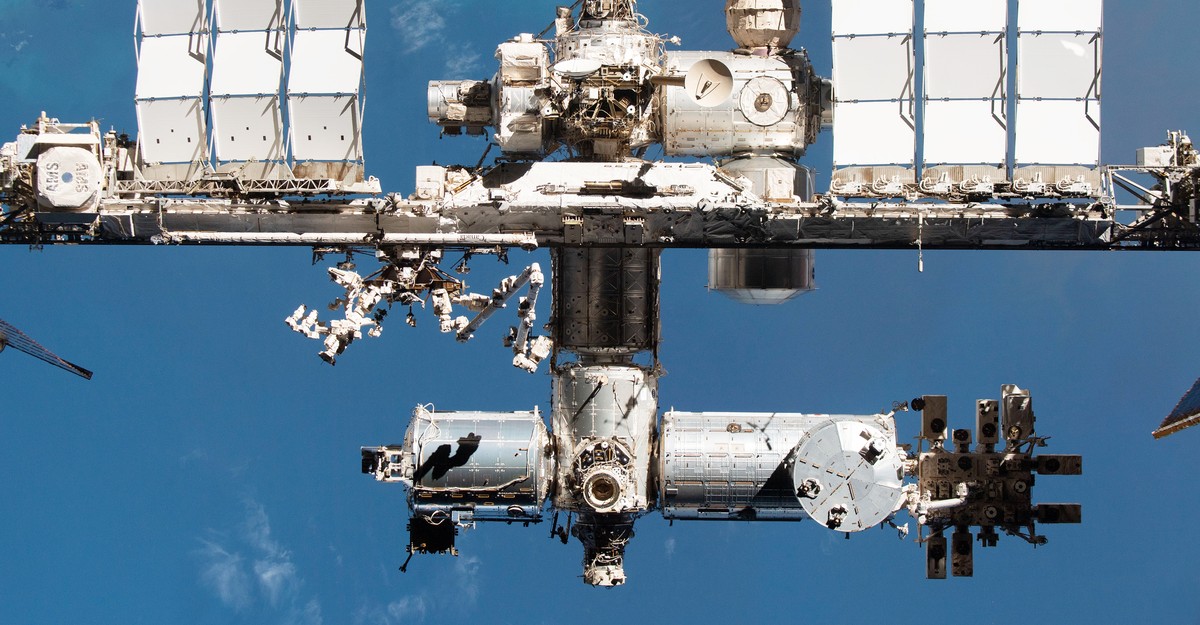 The new crew arrived at the International Space Station last week, all smiles and floating hair. There was, as usual, a little welcome ceremony, with heartfelt remarks from the newcomers streamed live for the people they left behind on Earth. A few of the astronauts floated above the others and turned upside down, hanging like bats, so that their beaming faces would fit into the frame.

But this latest trip was different: For the first time, a Russian cosmonaut had traveled to the space station on an American SpaceX capsule launched into orbit from Florida. The ride was the result of a new seat-swapping arrangement between the United States and Russia. Before 2020, when NASA started using SpaceX to reach the ISS, the space agency had relied solely on Russia’s astronaut-transport system, the Soyuz, paying millions of dollars a seat. Now American astronauts will fly on Soyuz, and Russian cosmonauts on SpaceX, with no money exchanged between the two countries.

The Russian and American space programs have been tangled up since the beginning, and they remain tethered now, even as relations between the two countries deteriorate because of the ongoing war in Ukraine. The two have no choice but to work together: The ISS is a shared space, with the U.S. and Russia its largest partners and Russia responsible for maintaining the station’s orbit.

Beyond the ISS, though, Russia’s space portfolio isn’t all that grandiose these days. Although cosmonauts fly into orbit regularly, Russia does not have a rover on the far side of the moon, as China has, or orbiters around Mars, as India and the United Arab Emirates have. It does not have a fleet of space telescopes like the U.S has. The Soviet Union was the first to send a human being to space, decades ago, and its early accomplishments are a distinct point of national pride. But the Russian space program has stalled for years, plagued by sparse budgets. And that was before Vladimir Putin’s onslaught on Ukraine: Some of the space plans the country still had in the works are falling apart. Now the Russian space effort may be more adrift than ever.

All of the satellites around Earth, thousands and thousands of them, whether the navigation kind or the spying type, can trace their history to Sputnik. When the Soviet Union launched the first artificial satellite into orbit 65 years ago, it ushered in a new era of technology—and set the tone for the space race. Within a couple of years, the Soviet Union had started launching spacecraft to the moon, where they intentionally crashed into the surface, sprinkling hardware across the regolith in a very explosive first. In 1961, Yuri Gagarin became the first human to travel to space, beating Americans to the milestone by less than a month. But by the end of the decade, the U.S. had effectively won the race: When American astronauts launched to the moon, the Soviet Union was still trying to figure out how to stop its rocket from exploding.

In the following years, the Soviets put the first-ever lander on Mars, which transmitted for about 20 seconds before cutting out, and sent a series of missions to Venus. They built their own space shuttle, which flew only once, and built a space station that operated for 15 years before being ditched into the sea. The fall of the Soviet Union led to a decreased influence on the world stage, but Russia remained a key player in space. By 1998, Roscosmos, the post-Soviet space agency, was helping the U.S. assemble the ISS piece by piece. For years, it was the only nation capable of flying people to the ISS.

These space successes have become a meaningful part of Russia’s national identity. “Space exploration is one of the two reference points in recent history”—the other being the Soviet Union’s victory in World War II—“that enjoys a broad consensus among Russians and defines many features of Russian political culture,” Pavel Luzin, a Russian space-policy analyst, has written. In recent years, after Russia’s takeover of Crimea and the resulting international backlash, the effort has become “less innovative and more militarily focused, while lacking a clear future direction,” James Clay Moltz, a professor of national-security affairs at the Naval Postgraduate School in California, has written. Last year, Russia conducted a missile test to blow up a defunct satellite, producing debris that passed dangerously close to the ISS. The space program is also running on a dwindling budget. “Russia is struggling to find a formula for space success in the 21st century,” Moltz wrote in 2020.

Russia’s full-on invasion of Ukraine has only made matters worse. The fallout from the war has narrowed the country’s space portfolio even more; sanctions have included U.S. measures meant to “degrade their aerospace industry, including their space program.” Russia has long hoped to rekindle its moon efforts, and eventually put people on the surface, but the European Space Agency, its partner in the effort, has withdrawn its participation because of the war in Ukraine. Europe has also kicked Russia out of the effort to send a new rover to Mars to search for signs of ancient life. National space organizations and private space companies alike have dropped Russian launch services on more than a dozen occasions, seeking other providers. Russia “risks being left behind completely in the increasingly competitive commercial space-launch market,” Jeremy Grunert, an Air Force lawyer who specializes in military and space law, wrote recently.

Roscosmos seeks to strike out on its own in low-Earth orbit and build a new space station, with the first module launching sometime in 2028, and more going up in 2030—the year the U.S. wants to start winding down the ISS. But sanctions have hindered development of Russia’s space-station hardware, which “has to be redesigned, as there will be no access to the Western electronics that the designers initially had in mind,” Luzin wrote. “It is obvious that the Russian orbital station project is both very ambitious and largely unfeasible given the current circumstances.” At a press conference held last week after the cosmonaut Anna Kikina launched on SpaceX, Sergei Krikalev, a former cosmonaut who serves as the executive director of Roscosmos’s human-spaceflight program, told reporters, “We know that is not going to happen very quick.” Russia, he said, could “discuss extending our partnership in ISS.”

If Russia were to jump ship early, it would have no spaceflight program to speak of. “We must bear in mind that if we discontinue manned flights for several years, it will be very difficult to restore what we have achieved afterwards,” Vladimir Solovyov, a former cosmonaut and the flight director for the Russian side of the ISS, said in a Roscosmos interview this summer. So Russia is likely to stay on the ISS for as long as possible, especially as the rest of its space endeavors wither. Not all of Russia’s space goals have been thrown into doubt. The country is working with China to build a lunar base by the 2030s. Although China has called for Russia to end its war on Ukraine, it has expressed support for their future cooperation in space exploration.

After Kikina arrived on the ISS last week, blasting off in an American-built capsule, sleeker and more spacious than the Russian Soyuz, I wondered whether she might say something about what’s going on in her home country. We shouldn’t assume that any professional spacefarer shares the beliefs of her president, although earlier this year, a trio of cosmonauts had posed for pictures on the ISS with a flag in support of pro-Russian separatists in Ukraine (NASA responded by saying that it “strongly rebukes” the display). But Kikina, the sole woman in Russia’s cosmonaut corps, just thanked her family and the crews she worked with, and held up a little handmade doll as tribute to her hometown of Novosibirsk. Meanwhile, 250 miles below, the war raged on, weakening Russia’s standing as a spacefaring nation.

A force that dominated the early days of humanity’s drive to reach the stars, that set the pace for the history books, now risks flaming out because of a land war back on Earth. In the coming years, Russia may no longer be considered a space power at all; in fact, some observers are making that assertion now.

Russia’s space future matters deeply to Russia itself, of course, but it also concerns the rest of the word. The country, uncomfortable in the shadow of other space powers, could double down on its military uses of space, threatening an already precarious arena. And while space exploration is an image-bolstering activity, it has consequences that transcend national borders—illuminating discoveries about the universe and our place in it, and remarkable demonstrations of what human beings can do with a little bit of rocket fuel and some curiosity, in the skies above Earth and well beyond. With Russia’s potential downfall as a space power, humanity’s potential in the cosmos may shrink, and a once-formidable participant that could have propelled exploration of the cosmos further will be left out of the endeavor instead.

The post The Russian Space Program Is Falling Back to Earth appeared first on The Atlantic.