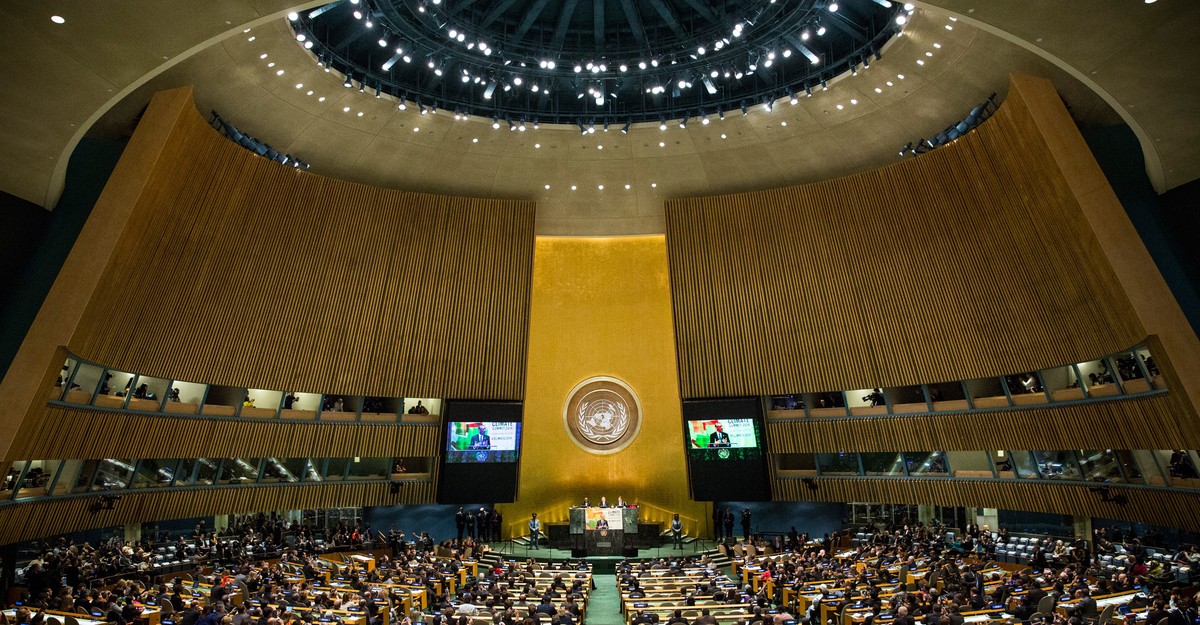 This week, tens of thousands of diplomats, activists, and world leaders are gathering in Sharm el-Sheikh, Egypt, for the annual United Nations climate summit, known as COP27. They’re meeting to discuss the ongoing implementation of the Paris Agreement, the global climate treaty that was finalized in 2015. The key issue is likely to be the pact’s “loss and damage” provisions–diplomatic shorthand for whether rich countries, who have emitted the bulk of carbon pollution into the atmosphere, should reimburse poor countries facing climate-change-intensified disasters. This is a controversial issue at climate talks and the negotiators at UN negotiations have pushed it along the way at every stage.

But the talks will also refocus attention on the Paris Agreement more broadly, and the international process that it jump-started seven years ago. The treaty, which is voluntary and nonbinding, has never been particularly revered: Many climate activists believe it doesn’t go far enough–its text doesn’t even mention fossil fuels, which cause climate change, by name–while climate-change-doubting politicians have demonized it. But its apparent insignificance has obscured a significant story, which has been unfolding slowly over the last few years. At least, the Paris Agreement seems to be moving forward.

Let’s refresh how the main process of the Paris Agreement is supposed to work. Each country pledges how much they will reduce their emissions every few years. After making the pledges several years ago, negotiators meet at COP to take a global inventory of their progress. There’s no penalty for not hitting your target; the only punishment is getting “named and shamed” by other attendees, nonprofits, and the press. Then the cycle restarts, and countries make new, more ambitious pledges. The current conference takes place during an “off year” for the cycle. This is when negotiators are reexamining other commitments and negotiating other aspects of Paris Agreement.

There’s no particular reason to think that the process should work. Paris Agreement is a simple global procedure requirement. It’s a voluntary agreement by all countries to complete the same homework assignment. And it is not how earlier international environmental treaties worked. For example, the Montreal Protocol was a successful international environmental treaty that banned the use of harmful ozone depleting chemicals. It established a global command and control system, which limited the amount of chemical production and the trade of these chemicals.

But the world has made more progress on climate change over the past few years than it did in the 25 years prior. As David Wallace-Wells recently noted in The New York Times, the world has significantly reduced the possibility of some of the most catastrophic climate outcomes. That’s partially due to technological improvements in wind, solar, and batteries. But it’s also due to a new urgency in how climate change has been discussed since 2015, and since 2018 in particular. You can see the urgency nearly everywhere you look: Since 2020, China has committed to its first net-zero target, the United States has passed the first substantive climate legislation in its history, and the European Union has committed at least 1 trillion euros to a new vision of its economy that it calls the “European Green Deal.”

Why is that? This is going to sound weird, but so far the Paris process is managing climate change because it has created a space to manage climate change. It has made a zone of peaceful competition, collaboration, and one-upmanship that stands apart from the rest of international politics. Consider that when the U.S. announced it would withdraw from the Paris Agreement at the beginning of the Trump administration, climate advocates worried that the treaty process would fall apart and other countries would pull out. Yet it did not, and they did not.

The process actually got stronger after the U.S. joined the bloc last year. The process was stronger when the U.S. joined the group last year. This is partly because of blue-state governors and mayors of some of the largest companies in the countryto preserve the spirit of the agreement, but also because Trump’s exit was used by the rest of world as an excuse to not show up. As Matto Mildenberger and Michael Aklin have observed ,, the Paris Process–and the COPs–allows pro-climate action groups from each country to collaborate with those in the other countries. This often occurs through trade- or finance-related discussions that take place off the conference side. )

Watching the Paris talks play out, I’ve started to wonder if they meet the philosopher and polymath Nicholas Nassim Taleb’s definition of antifragility–systems that get stronger as they are subjected to shocks and volatility. It’s still possible, despite all the work done by the Paris Agreement, that we have reached the highest point of the treaty. Countries, after all, are starting to tackle the trickiest issue at COP–the issue of loss and damage, or as former U.K. Prime Minister Boris Johnson derisively called it on Monday, climate “reparations.” The treaty process is only antifragile as long as countries have something to collaborate on; if parties or movements in several large countries decide they want nothing to do with climate action, then it could wither. This possibility became more likely after the U.S. midterm elections last night. The red wave did not materialize, but the GOP could still win a robust trifecta, giving it control the White House and both chambers of Congress, as soon as 2024. A U.S. withdrawal or an attempt by the U.S. to discredit UN agencies might not be sufficient to disrupt the Paris Process. It might still be sufficient if it is combined with other anti-climate and far-right movements around the globe, such as in China or Europe.

Climate-related pledges only work when some plurality of the world’s largest polluters get together to make them. The U.S., as Republican politicians continually remind us, emits only a fraction of the world’s annual carbon pollution. It could cause real harm if it left Paris with China, Europe and other countries. An earlier this year I suggested that we may be living in a golden era of climate action . After the Fall, Eden was not Eden.

The post The Paris Agreement Is Working … for Now appeared first on The Atlantic.