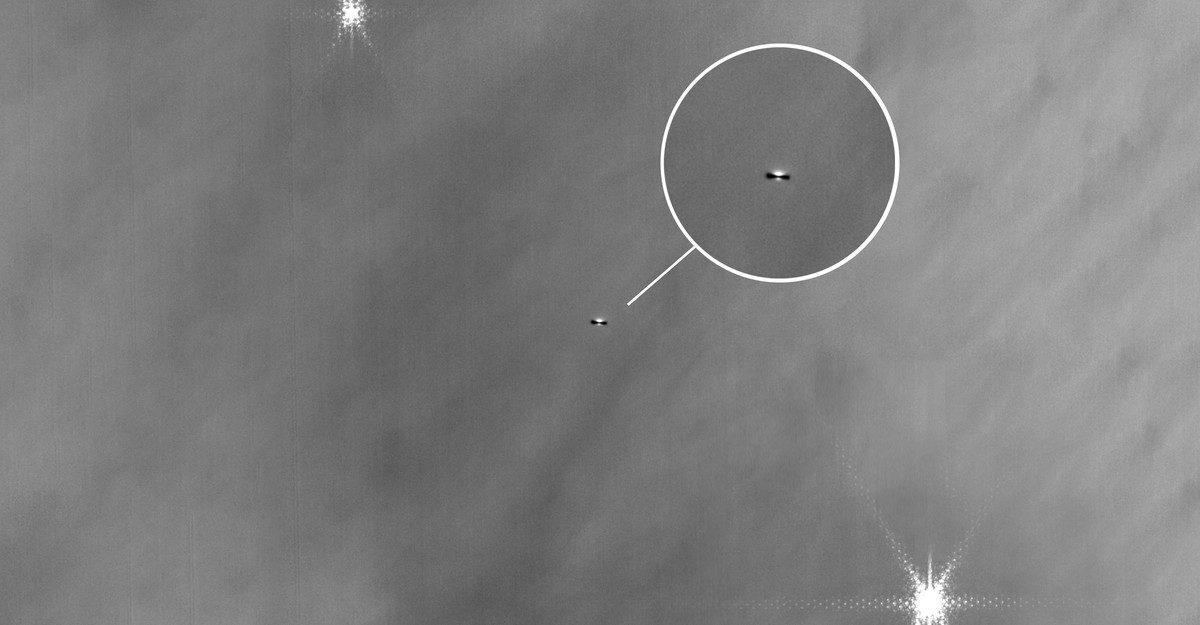 If alien astronomers observed our solar system from a distance 4. 5 billion years ago, they would have seen a star surrounded by primordial gas and dust. That material, arranged in a narrow but dense disk, whirled round and round the young star. Over time, its particles collided and formed clumps. Gravity smoothed the jagged edges of the biggest ones to make planets and moons, and left the bits and pieces to become asteroids and comets.

The same process happens around other stars across the universe. We can even take a snapshot of it with the help of powerful telescopes. It doesn’t look like much, but that small, flying-saucer-looking thing in the image at the top of this article is a planetary system in the making. The little bright bulb in the darkness, encircled in its own ring of dust and gas, is known to astronomers as a protoplanetary disk. The beginning of our cosmic home, before the star was known. It is also the view that a few life forms on the third planet, the sun, saw.

This work in progress is situated in the Orion Nebula, a luminous cloud of interstellar gas and dust about 1,500 light-years away. Its star is about 1 million years old–a baby, in astronomy terms. The dust around the star blocks the light from the bright nebula in the background, rendered here in gray, so the planetary disk appears in silhouette. The faint, fuzzy orb nestled within is not the star itself but rather starlight shining off the ring of dust around it, according to Mark McCaughrean, an astronomer and senior adviser for science and exploration at the European Space Agency. This is one of the most tantalizing environments in the cosmos, where small particles will eventually transform into full-blown worlds.

The image arrived earlier this fall from the new James Webb Space Telescope, which McCaughrean is using to study a cluster within the Orion Nebula that is home to many young stars like this one. “What we’re trying to look for is whether the particles in that disk have grown bigger than you would expect in the interstellar medium–average bits of dust, tiny things floating around in space,” McCaughrean told me. “Has this disk managed to actually get some of the particles to stick together and start the process toward planet building already?”

The Webb telescope can observe only the outermost edge of this disk, but any evidence of clumping there would suggest that the same process is occurring farther in, closer to the star, where the disk is even denser, McCaughrean said. According to planet-formation theories, gas giants like Jupiter and Saturn should already be taking shape here.

The star system, known by its coordinates as Orion 294-606, is not a new discovery, and astronomers have observed such targets before, in the Orion Nebula and elsewhere. They have found the telltale signs of planets taking shape by studying patterns in the flow of gas within a protoplanetary disk. Astronomers have even identified the distinct signatures of the chemical elements floating inside some of these disks, which allow them to make predictions about what future planets might be made of. But McCaughrean captured an object hovering in shadow of a cloud. It is poignant. It reminds me of the “pale blue dot,” the famous image captured by NASA’s Voyager spacecraft in 1990 after its grand tour of the solar system, the one that inspired Carl Sagan to describe Earth as “a mote of dust suspended in a sunbeam.” When I first saw that image, I was kind of underwhelmed. It’s a flawed picture: The fuzzy streaks of sunlight are technical artifacts, something to do with the way the probe’s camera was pointed, and the tiny speck in the orange beam looks like something you’d try to wipe away on your laptop screen. Astronomy images often have these problems–the subject and its significance are not always immediately clear. These pixels can only be transformed if you take the time to look at it for awhile, allowing yourself to wonder and ponder. A grainy image can come to represent humankind’s attempt to understand the universe, and show us our place within it.

Orion 294-606 could be viewed as a zoomed-out, interstellar version of the pale blue dot. The image doesn’t evoke loneliness, although McCaughrean stated that there are many stars just outside the frame. It is because of its enormity. The pale-blue-dot picture captured a whole world, and the Webb snapshot holds something even greater. This protoplanetary disk is about five times wider than our solar system out to Neptune. This protoplanetary disk likely contains all the necessary elements to make a planetary structure with as many varieties as ours and to possibly even create its own version of Saturn and Jupiter. That little smudge of pixels? It’s the kind of place that can create pale blue dots, and, perhaps, all the life that lies within.

The post The Unimaginable Possibilities of a Tiny Spudge from Outer Space was first published on The Atlantic ..