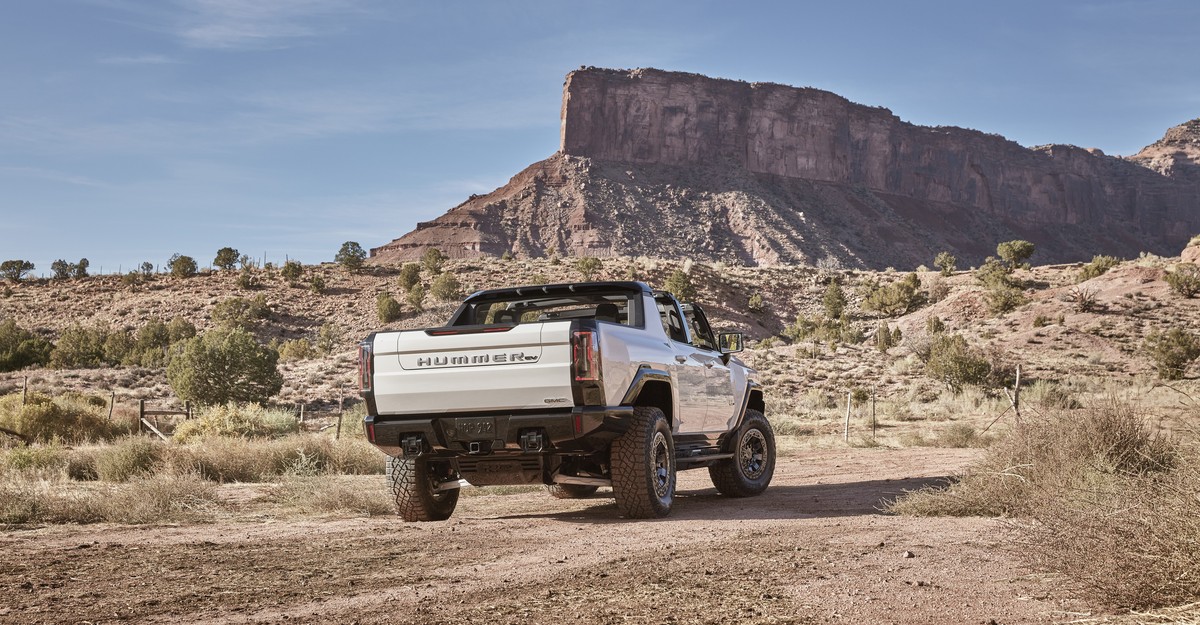 The GMC Hummer EV was always going to be divisive. Even its name, which ported one of the most famous gas-guzzling brands of all time to the world of zero-emissions vehicles, was a kind of taunt. But this month, a viral video gave a sense of what a flash point the $110,000 car may be.

Edmond Barseghian, a Los Angeles–based influencer and entrepreneur who drives exotic cars, has one hand on the wheel of the new Hummer pickup. He accelerates out of a stop as the words “12,000 lbs truck out accelerates most super cars” flash across the screen.

The Hummer gets up to 66 miles per hour in a few seconds. Barseghian moans in pleasure. Then he realizes that his vehicle is hurtling—at highway speed—toward three lanes of cars idling at a stoplight. “Oh shit,” he says, as he seems to slam on the brakes. “I forgot how heavy this car is.” Barseghian comes within a car’s length or two of a collision before fully stopping. “It did not want to slow down,” he says, cursing. “Whew! Knocked the air out of me.”

The video, which got hundreds of thousands of likes on Instagram but has now trickled to other major platforms, provoked a divided reaction among viewers. For Barseghian and many of his followers, the Hummer seemed to validate EVs as legitimate road machines. “My new Hummer made me a believer in electric cars,” Barseghian wrote in the video’s caption on TikTok. But other people did not find themselves as revved up. “The EV Hummer is here and we should all be concerned,” tweeted one self-described car enthusiast. “These should not be street legal, unless obliterating people with cars is the goal,” posted Michael Eliason, an architect who specializes in sustainable construction.

The Hummer EV haters and lovers had discovered one of the most important facts about electric “super trucks”: They are very heavy, and they go very fast. If you imagine an ambulance that can accelerate as fast as a Formula 1 car, you’re imagining a vehicle only slightly more unwieldy than the new Hummer. I am not exaggerating: F1 cars can go zero to 60 in 2.6 seconds; the EV Hummer pickup can get there in three seconds flat. The Tesla Model X Plaid, an SUV that weighs a comparatively svelte 5,390 pounds, can get up to 60 miles per hour in 2.5 seconds.

Mikhael Farah, a spokesperson for General Motors, told me in a statement that the Hummer in the video was able to accelerate so rapidly because the driver was using a feature called “Watts to Freedom,” a “launch-control mode” designed to propel the car forward from a stop. The Hummer’s owners manual warns drivers that “Watts to Freedom is intended for use only on a closed course and should not be used on public roads,” Farah said.

Of course, the fact alone that Watts to Freedom is shipped with street-legal cars reveals the unusually lax regulatory environment that cars face. Ebikes, for instance, are physically restricted by federal law from exceeding a maximum speed by motor alone; cars, meanwhile, can include a dangerous acceleration mode as long as the owners manual warns drivers to “make sure there are no people or objects around” before you activate it. Watts and freedom aside, the weight of EVs is a safety issue that drivers—and cyclists and pedestrians—will only have to keep worrying about as these cars go mainstream.

Why are electric trucks so heavy? Lithium-ion batteries, the main type of energy storage used in modern EVs, are significantly less energy-dense than gasoline or diesel fuels. That means that, all else being equal, a battery pack that can propel an EV for 100 miles of driving will weigh more than the gasoline that will power a car the same distance.

Of course, all else isn’t equal. EVs use their stored energy far more efficiently than gas cars do, according to Anthony Schiavo, a research director at Lux Research, a global advisory firm. “It turns out that combusting fuels is not that effective a way to generate energy,” he told me. Although batteries are heavier than gasoline, electric motors are much lighter than internal-combustion engines. Still, nearly all EVs are, for now, heavier than their gas-powered equivalents.

The physical limitations of batteries mean that cars like my own, a decade-old Volkswagen that weighs 2,900 pounds and has about 400 miles of range on a full tank, would be tough to re-create as an EV using today’s technology, Schiavo said: Even if you could accomplish it on an engineering basis, the raw materials would probably cost more than the car’s original purchase price. (The Hummer EV’s battery pack alone, meanwhile, weighs nearly as much as my car.)

Yet physics by itself isn’t to blame for the Hummer’s paunch. There’s no technical requirement forcing the Hummer to weigh 9,000 pounds, and in fact, the battery pack in the Hummer takes up only about a third of the car’s overall weight. “It’s absolutely a design choice and a marketing choice,” Schiavo said. “People like larger vehicles, and the reason why those larger vehicles are getting made is because they sell.” Since the Ford Explorer was first introduced in 1990, more and more Americans have bought big, truck-like cars—SUVs, crossovers, pickups.

These big vehicles are dangerous. American vehicle deaths jumped to a 20-year high in the first part of this year; the U.S. leads the developed world in traffic deaths. These statistics, which have deteriorated since the pandemic began, seem to be even worse for pedestrians: Last year, pedestrian deaths reached their highest level in 40 years, according to the Governors Highway Safety Association.

Suffice it to say that cars as huge as the Hummer EV need to face some kind of regulation, especially in cities and towns, where they pose a distinct threat to the public. The federal government, specifically the National Highway Traffic Safety Administration, must make good on enforcing the pedestrian-safety standards that it has said are coming. Perhaps the most innovative work being done is happening here in Washington, D.C., which is asking drivers of especially heavy vehicles to pay a higher registration fee to accommodate the greater road wear and tear that they will cause.

“The customer’s safety is a top priority regardless of the type of propulsion or mass of the vehicle,” Farah, the GM spokesman, said in a statement. He shared a report suggesting that the rise in traffic deaths is “likely” caused not by heavier cars per se, but by a pandemic-era spike in speeding, drunk driving, and distracted driving. But the same report also said that infrastructure that has “prioritized the movement of motor vehicles over walking and bicycling” has worsened the traffic-death epidemic. And addressing that problem—by making cities and suburbs more bike- and pedestrian-friendly—is entirely in line with America’s climate goals. According to a recent report from the Rocky Mountain Institute, an energy think tank, Americans must collectively reduce their passenger “vehicle miles traveled” by 20 percent in order to keep the planet from warming more than 1.5 degrees Celsius. Electrification cannot be an excuse for needless traffic deaths; nor can it let us cede our streets to cars alone for another half century.

But if the Hummer EV’s weight can be brought under control—and if it still develops a reputation as so reckless that liberals resent it, or seek to ban it from their cities … I’m not sure that’s actually bad for the energy transition per se.

One of the greatest remaining obstacles that EVs face in America is cultural opposition. People identify deeply with their cars; they expect them to say something about themselves, and right now, driving an EV sometimes but not always marks you as a liberal. Because political identity is often influenced by doing what the other side hates, it’s not unimaginable that tagging the Hummer EV as the Anti-Democrat EV could help the industry more broadly. But it’s also possible to imagine a world where Democrats and Republicans each find their own reasons to hate the Hummer, or where a few high-profile crashes lead conservatives to join liberals in balking at super-heavyweight EVs generally.

Whatever happens, the drama around the Hummer EV is a reminder that the energy transition will not play out with the aesthetics that climate change has had so far. Last week, I wrote that people who have worked in climate change for a long time should prepare themselves to feel like old fogeys—and to welcome the deluge of insight from people just joining the field. The same is true for aesthetics. (And cars, for all their dangers, remain at least partially aesthetic objects.) For the kind of liberal communitarians who have cared a lot about climate change for decades—who have thought about their carbon footprint, bought conventional hybrids, and worried about flying or their meat consumption—sometimes winning on the politics of climate change is going to feel a lot like losing on the aesthetics.

The post The Electric Hummer Is a Mix Between an Ambulance and a Race Car appeared first on The Atlantic.