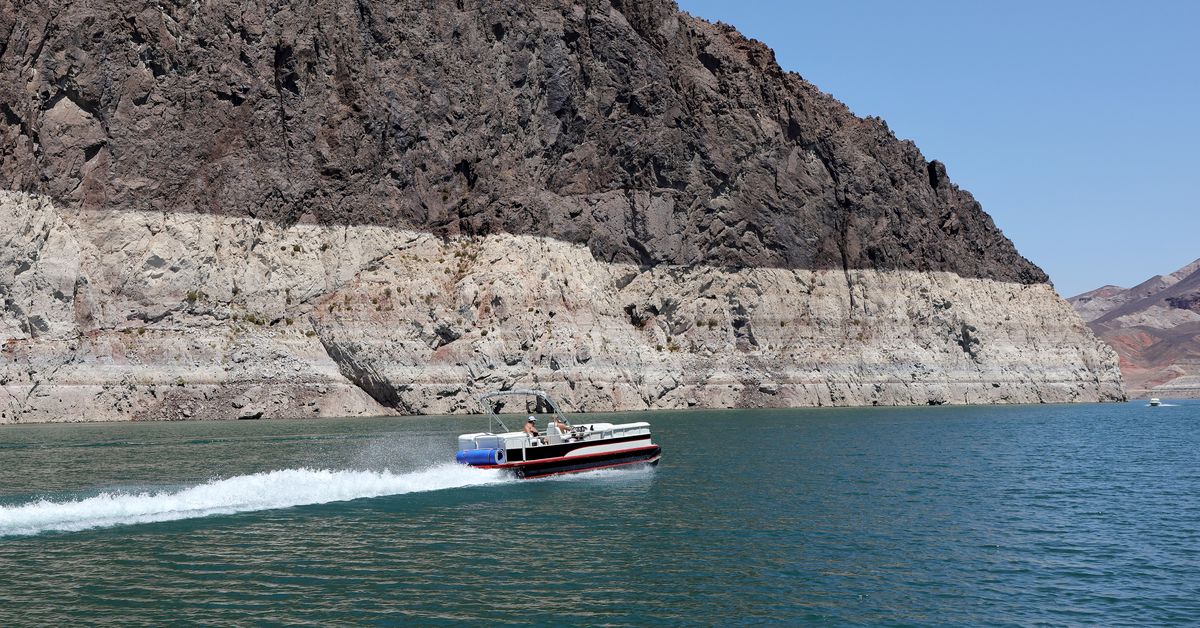 The extraordinary drought across the Western United States is only getting worse, and the images have been stunning: boats listing on dry lake beds, yellowing vegetation, and “bathtub rings” around reservoirs showing just how much water levels have fallen. It’s led to historic water rationing measures, including a new round of cuts announced this week from the federal government after seven states along the Colorado River failed to meet a deadline to come up with a plan to voluntarily reduce their water use.

“In order to avoid a catastrophic collapse of the Colorado River System and a future of uncertainty and conflict, water use in the Basin must be reduced,” said Tanya Trujillo, assistant secretary for water and science at the Department of the Interior, in a statement this week.

The full scale of the drought, however, can only be seen from space. NASA satellites have been monitoring waterways in the West for years and documenting how the region is drying up. It’s part of a trend lasting almost two decades, making it the worst drought in 1,200 years. Part of the severity of this “megadrought” has been worsened by climate change.

The two largest reservoirs in the United States, both on the Colorado River, illustrate this vividly. The Colorado River system as a whole is at 34 percent of its peak capacity this year, down from 40 percent last year.

Lake Mead, the reservoir impounded by the Hoover Dam between Nevada and Arizona, is the largest in water capacity. It can hold 9.3 trillion gallons of water at its peak and reach an elevation of 1,220 feet above sea level. But the last time it was anywhere close to that level was 1999. This summer, the water elevation fell to about 1,042 feet, a record low, and put the lake below 27 percent of its capacity.

Compare the satellite images of the lake in 2000 and in 2022, and you can see the stark decline:

If water levels in Lake Mead dip below 1,000 feet, the massive generators that produce more than 2,000 megawatts at their peak can no longer operate as normal. And if the drought continues, Lake Mead could reach “dead pool status,” where the water level is too low to flow downstream.

The situation is also grim further upstream along the Colorado River. Lake Powell, which was formed by the Glen Canyon Dam between Utah and Arizona, is also at record low water levels. It can hold about 8.2 trillion gallons at its peak with its water elevation reaching 3,700 feet above sea level. Water levels this spring fell below 3,525 feet above sea level, putting Lake Powell below 26 percent of its full capacity.

Satellite images taken in 1999 and 2021 illustrate the decline:

“There’s a drought within a drought,” said Sean Turner, a water resources modeler at the Pacific Northwest National Laboratory. “Those dams [on the Colorado River] are suffering not necessarily because of the 2020-2022 drought that’s occurring right now, but more because of the dry conditions over 20 years.”

But there are reservoirs that have fallen as a result of the more recent drought. Shasta Lake, California’s largest reservoir, dropped 106 feet in elevation from when it was last full in 2019. The water’s retreat from the shoreline is clearly visible in these photos:

Unlike other major reservoirs that are also fed by snowpack and groundwater, about 90 percent of water in Shasta Lake comes from rainfall. That means the reservoir is more vulnerable to seasonal changes in precipitation. On the other hand, a year with good rainfall can recharge it. Water levels on Shasta Lake are a bit higher in 2022 than 2021, but it was still only at 38 percent capacity this summer. Shasta Lake is also much smaller than Lake Mead or Lake Powell, retaining upward of 1.46 trillion gallons when full.

Similarly, Lake Oroville in California, with a peak capacity of 1.15 trillion gallons, also saw a big drop in water levels between 2019 and 2021:

It’s important to remember that these reservoirs are artificial bodies of water. How much they contain is not just due to the whims of nature but also human management. Water levels are a function of inputs like rain and groundwater, and outputs discharged to quench major cities, irrigate farms, and generate electricity.

Rising temperatures also play a major role, leading to more evaporation and causing snowpacks to melt earlier in the season. Warmer weather increases energy and water demands from cities and agriculture. And as people continue pumping more greenhouse gases into the atmosphere from burning fossil fuels, the planet’s temperature will rise higher, putting a tighter squeeze on what little water is available.

All of this is increasing political tension as the water users in the West must balance their growing thirst with shrinking supplies. Federal officials noted that the Bipartisan Infrastructure Law provides $8.3 billion for water infrastructure programs, and the Inflation Reduction Act signed this week adds another $4 billion for water management. But money can’t make water appear where there is none, and the Western US will have to do more with far less. This week, the US Bureau of Reclamation, which manages water projects in the Western US and is the country’s largest water wholesaler, announced new water rationing measures for states along the Colorado River basin.

“The system is approaching a tipping point and without action, we cannot protect the system and the millions of Americans who rely on this critical resource,” said Camille Calimlim Touton, commissioner of the Bureau of Reclamation, during a press conference this week.

The post The Colorado River drought is so bad you can see it from space appeared first on Vox.