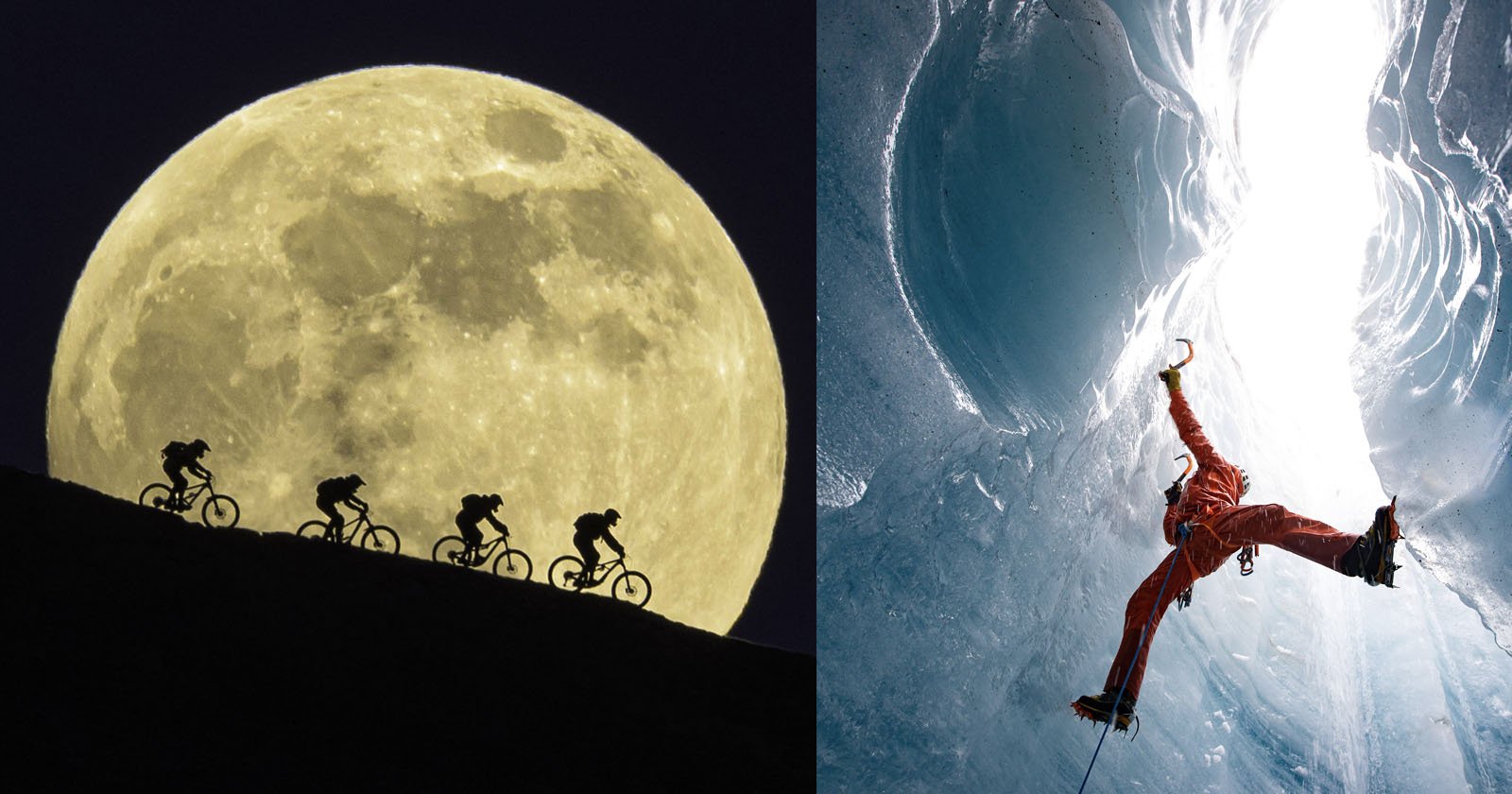 The winners of the eighth international Mountain Photography Contest have been announced that features stunning images from outstandingly skilled adventure photographers.

The Club Vasco de Camping Elkartea (CVCE), a San Sebastien, Spain mountain club has hosted the contest eight years in a row. Thousands of entries were received from all over the world.

The jury chose 20 winners from Spain, Canada, Slovenia, Poland, France, the United States, and Germany. The overall winning image was taken by Yhabril Moro, from Biscay. His epic image shows a skier as the sun goes down behind him. Moro used an off-camera flash to illuminate the rider and captured the moment with a Sony Alpha 1 and a 12-24mm lens with a shutter speed of 1/2000s.

Second place went to Candian photographer Paul Zizka with his remarkable perspective shot of ski tourer Sasha Galitzki from the inside of an ice cave in the Canadian Rockies.

“Our group was moving past the toe of the Stutfield Glacier in Jasper National Park, and we noticed a small hole in the snow that covered the ice. Because the main goal for the day was to locate and photograph ice caves, we poked our heads inside every hole that we saw, just in case it would open up onto a large chamber,” says Zizka.

This particular cave did not open up, but it had enough space for one or two persons. Nevertheless, the view out of a small, hoar-frost-rimmed window made for great framing possibilities.”

Not all the pictures were snow-related. Third place went to Jose Allende with a climbing image taken in the Wadi Rum desert in Jordan. He used his Sony 70-200mm to shoot through branches to create a heat effect with the climbers in situ.

“I was on a dune where there were some small plants and I took some photos that I really liked. Allende wrote that he saw the effects of the branches as if they were a fire, which was exactly what he felt in that particular moment.

Overall winner Moro actually had two images in the final, including a second spectacular shot of four bikers silhouetted against a giant moon was also merited. Moro used a Sigma 150-600mm, at the 600mm length, attached to a Nikon D750.

“I spent a month or so searching until I decided to choose this place at a height of about 2,500 meters. We had the possibility of reaching it by car through a mountain track up to about 1,700 meters high. That meant that the boys would have to ascent with the bikes about 800 meters of elevation. Moro explains, “I told them my plan and they were willing to comply.”

“By my calculations, I had to be about 1km away, and that meant climbing to the mountain in front, quite steep and difficult to access. The good thing about being at that distance is that it allowed me to focus at the hyperfocal distance, and closing the diaphragm at f/11 left me practically at 1km, which is good news for this type of photo as it allows me to keep in focus both the subjects and the moon.”

The awards ceremony will be held in San Sebastien on the Northern coast of Spain on May 28, which is also where the awards for the mountain film festival will also be handed out.

The winning images will also be on display at the Club Vasco de Camping Elkartea exhibition room between May 30 and July 29.

Image credits: All photos are individually credited and were provided courtesy of CVCEPhoto.