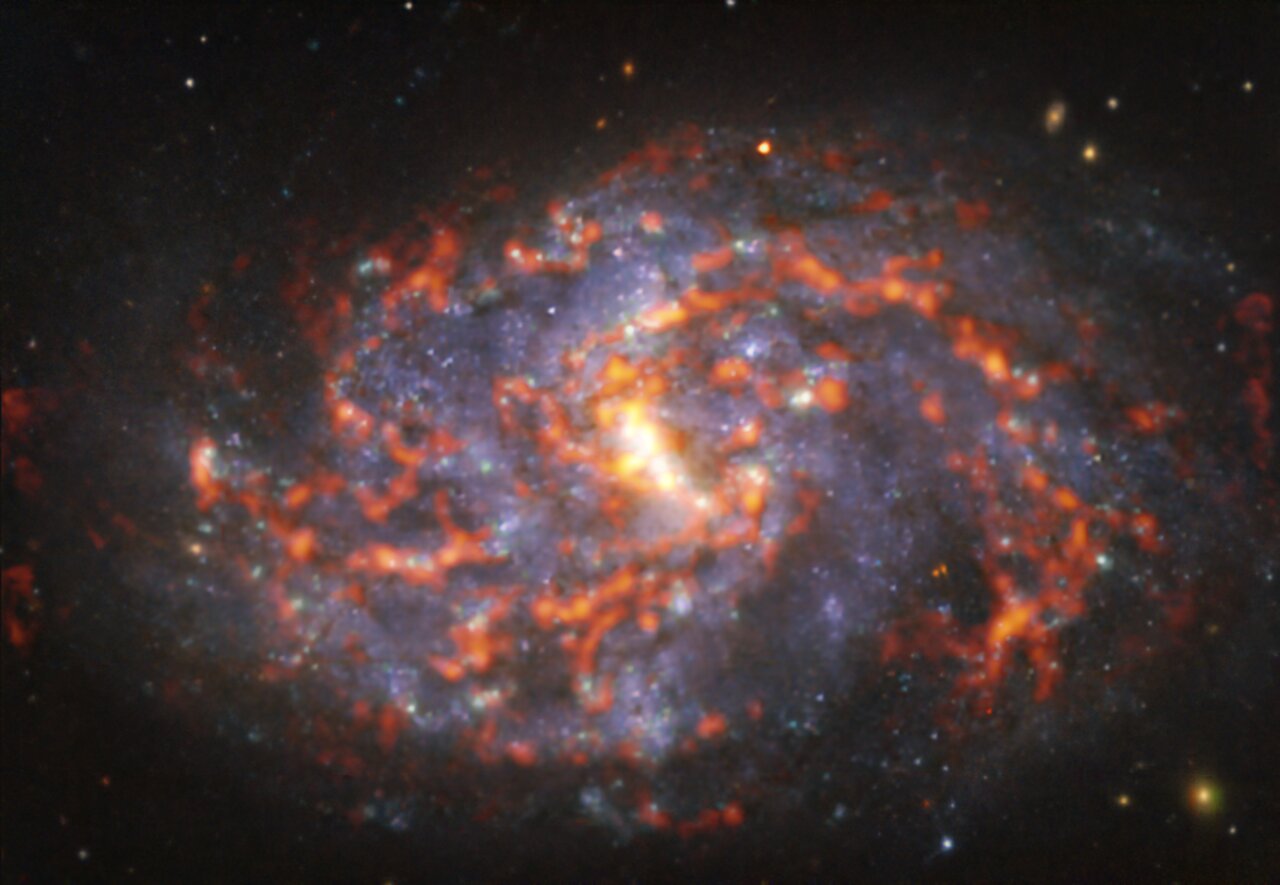 The European Southern Observatory’s Very Large Telescope (VLT) and Atacama Large Millimeter/submillimeter Array (ALMA) have imaged a snake-like galaxy. Scientists named the galaxy NGC 1087, and it is swirling through space almost 80,000 light-years from our planet.

ALMA’s image of this snake-like galaxy is breathtaking

The snake-like galaxy spans over 86,800 light-years across. You can find it within the constellation Cetus. It is also home to many other constellations with water themes, like Aquarius and Pisces. Although it isn’t necessarily the largest galaxy we have found, it’s certainly impressive.

They created the main image by combining multiple images from ALMA and the Multi-Unit Spectroscopic Explorer on the ESO’s VLT. This allowed the ESO to create an image that showcases the full galaxy, along with the cold clouds of star-spawning gas that surrounds it. The areas with blue tints are older, more mature stars.

Scientists captured the shots as part of a conjunctive project called the Physics at High Angular Resolutions in Nearby Galaxies Survey, or PHANGS. Scientists were assigned to assist in the delivery of a catalogue of high-resolution observations from nearby galaxies using telescopes with a broad range of wavelengths. This snake-like galaxy is just one that the team has seen.

And ALMA is perfect for capturing images of galaxies like this because of how high up it is. The observatory is located at an altitude of 5,000 meters (16,500 feet) in Chile. As such, it has an excellent vantage point for the 66 radio telescopes the observatory is equipped with.

While the snake-like galaxy is intriguing, it’s just one of millions of galaxies out there. Despite its unique shape, the galaxy falls within one of most commonly found categories: the spiral. Spirals are by far the most common type of galaxy we have discovered thus far. There are four main types of galaxies.

The primary galaxies are elliptical (or spiral), barred spiral (or irregular). We have found galaxies with each type of galaxy throughout the universe. As we continue to search the stars, I am sure that there will be more.

Additionally, because ALMA and the VLT can capture different wavelengths, scientists hope to learn more about the internal physical properties of galaxies. Comparing results from multiple readings can help astronomers better understand the cosmos, including the snake-like galaxy NGC 1087.