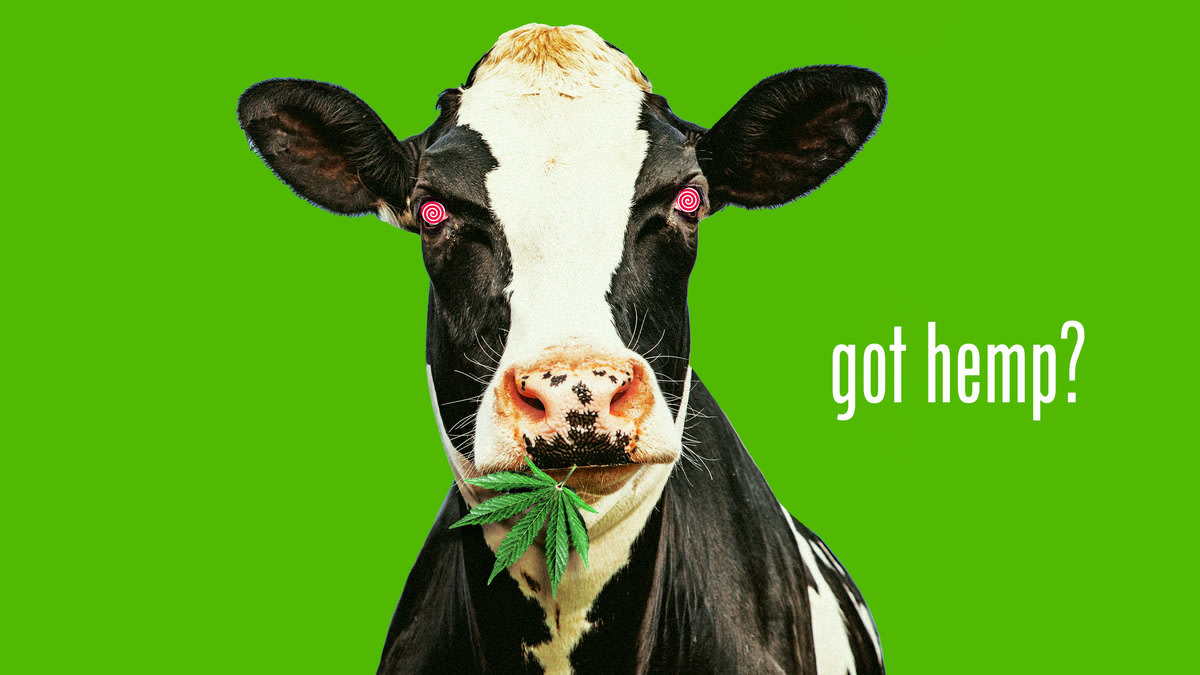 Amid moral panic over the legalization of weed, we might be missing a much greater danger posed by the cannabis plant: stoned cows. New research by German research institutes has shown that feeding hemp to dairy cows can cause behavior changes and produce unintentionally cannabinoid-infused water.

The study, which was published on Monday in the journal Nature Food, adds data to a growing chorus of voices calling for the brakes to be applied to the hemp feedstock industry. This study advocates for further research to prove that hemp can be as innocent as people think.

Hemp is legal to grow and use. In the U.S., the 2018 Farm Bill legalized growing industrial hemp to turn into cloth, CBD, seed, and grain for human or animal consumption. When processors extract CBD oil from hemp, large amounts of plant material are left behind, prompting growers to consider using it as a cheap animal feed option.

In the study, researchers fed 10 dairy cows different concentrations and types of hemp. One group dined on low-cannabinoid whole-plant hemp, while another received a high-cannabinoid feed made from hemp leaves, flowers, and seeds. Whole-plant hemp at a low concentration did not result in any pronounced changes, but feeding cows even small amounts of the leaves, flowers, and seeds caused the animals to act… well, stoned.

Researchers observed changes like increased yawning, salivating, runny noses, sleepiness, and “pronounced tongue play,” according to the study. The study found that some cows who were fed the most high-cannabinoid diet had a wobbly gait, abnormal posture and exhibited unusual walking habits.

And the animals that were fed both high and low levels of leaves, flowers, and seeds had measurable amounts of both THC and CBD in their milk, which remained above zero for days after they were weaned from the hemp diet.

Sonja Schach, spokesperson for German Federal Institute for Risk Assessment stated in an email to The Daily Beast that researchers attempted to simulate a real-life scenario. THC levels in the most high-concentration hemp feed to cows were below the legal limit of 0. 2 percent, she said.

” The study doesn’t allow for any conclusion to be made about whether milk is unsafe to consume.

The study isn’t likely to calm the concerns of critics–and for good reason. The American Veterinary Medical Association warned against using hemp in animal feed earlier this year “until studies show it’s safe.” Not only are the long-term effects to animals of cannabinoid exposure unclear, laboratory methods to detect it in animals’ eggs, milk, and meat are still under development.

“To achieve approval, scientific evidence of appropriate limits needs to be established to protect consumers from unwanted exposure to cannabinoids,” a joint open letter signed by 17 animal organizations reads. “We understand the importance of supporting the hemp industry, and yet we also believe it is simply too soon to know whether hemp is safe for farm and ranch animals, as well as for our pets.”