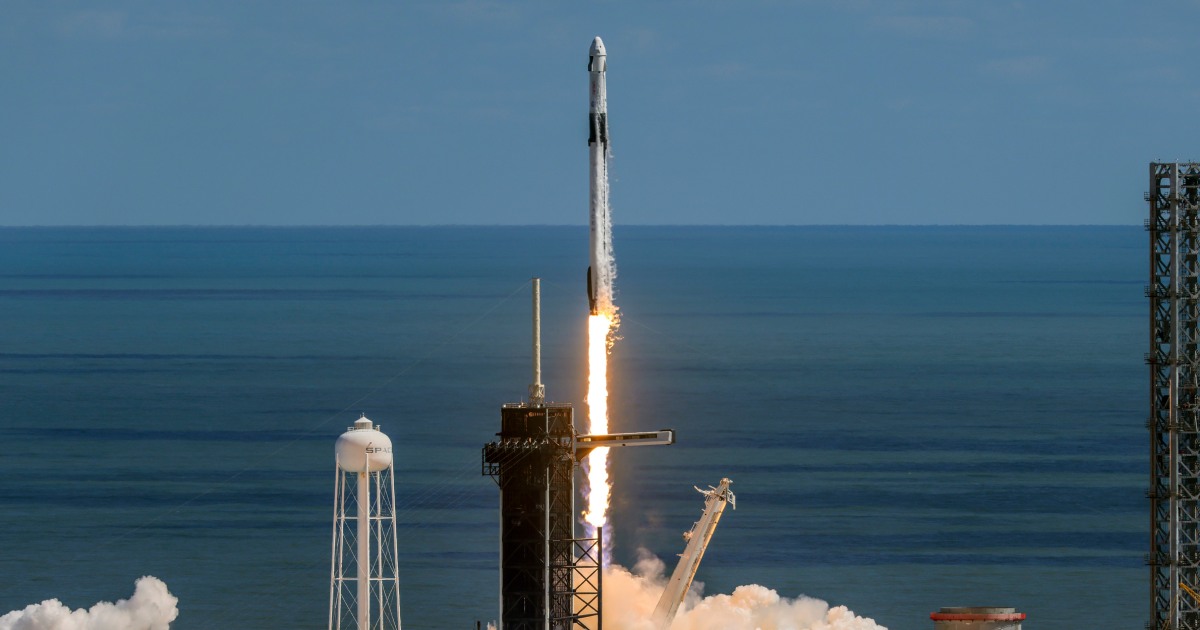 CAPE CANAVERAL, Fla. — A SpaceX rocket soared into orbit from Florida on Wednesday carrying the next long-term International Space Station crew, with a Russian cosmonaut, two Americans and a Japanese astronaut flying together in a demonstration of U.S.-Russian teamwork in space despite Ukraine war tensions.

A high-ranking official of the Russian space agency Roscosmos said shortly after the launch that the flight marked “a new phase of our cooperation” with the U.S. space agency NASA.

The SpaceX launch vehicle, consisting of a Falcon 9 rocket topped with a Crew Dragon capsule dubbed Endurance, lifted off into clear skies at noon EDT (1600 GMT) from NASA’s Kennedy Space Center in Cape Canaveral. The two-stage, 23-story-tall Falcon 9 ascended from the launch tower as its nine Merlin engines roared to life in billowing clouds of vapor and a reddish-orange fireball.

The mission is notable for the inclusion of Anna Kikina, 38, the lone female cosmonaut on active duty with Roscosmos, making the first spaceflight of a Russian launched from U.S. soil in two decades. As the spacecraft entered Earth orbit, Kikina radioed her thanks to NASA, Roscosmos and their International Space Station (ISS) partners for “giving us this great opportunity.”

“We’re so glad to do it together,” Kikina said.

Kikina, who had trained in the United States for the flight since spring 2021, was essentially swapping places with a NASA astronaut who took her seat aboard a Russian Soyuz flight to the ISS last month under a new ride-sharing deal signed by NASA and Roscosmos in July.

About nine minutes after Wednesday’s launch, the rocket’s upper stage delivered the Crew Dragon into a preliminary orbit as it streaked through space at nearly 16,000 miles per hour (27,000 kph). The reusable lower-stage booster flew itself back to Earth and landed safely on a drone recovery vessel at sea.

The four-member crew and their autonomously flying capsule were expected to reach the ISS in about 29 hours, on Thursday evening, to begin a 150-day science mission aboard the orbital laboratory some 250 miles (420 km) above Earth.

This latest team was led by Nicole Aunapu Mann, 45, a veteran combat pilot making spaceflight history as both the first Native American woman sent to orbit by NASA and the first woman to take the commander’s seat of a SpaceX Crew Dragon.

Moments after reaching orbit, as mission control wished the crew “Godspeed,” Mann radioed back, “Awesome. Thank you so much to the Falcon team. Whew! That was a smooth ride uphill.”

Commander Mann, a U.S. Marine Corps colonel and combat fighter pilot, is also among the first group of 18 astronauts selected for NASA’s upcoming Artemis missions, aimed at returning humans to the moon later this decade.

Rounding out the crew from Japan’s space agency JAXA was veteran astronaut Koichi Wakata, 59, a robotics expert making his fifth voyage to space.

The Crew-5 team will be welcomed by seven existing ISS occupants — the Crew-4 team consisting of three Americans and an Italian astronaut — as well as two Russians and the NASA astronaut who flew with them to orbit on a Soyuz flight.

The new arrivals are tasked with conducting more than 200 experiments, many focused on medical research ranging from 3-D “bio-printing” of human tissue to the study of bacteria cultured in microgravity.

ISS, the length of a football field, has been continuously occupied since November 2000, operated by a U.S.-Russian-led consortium that includes Canada, Japan and 11 European countries. It was born in part to improve relations between Washington and Moscow following collapse of the Soviet Union and the end of Cold War rivalries that spurred the original U.S.-Soviet space race.

NASA-Roscosmos relations have been tested since Russia invaded Ukraine in February and the United States imposed sweeping sanctions against Moscow.

At a post-launch NASA-SpaceX briefing on Wednesday, Sergei Krikalev, head of human spaceflight for Roscosmos, said he and his boss, agency chief Yuri Borisov, were seeking to ease tensions after Borisov’s predecessor, Dmitry Rogozin, raised questions about the future of the ISS partnership.

The deal inked by the two sides in July paved the way for resuming routine joint U.S.-Russian flights to the ISS.