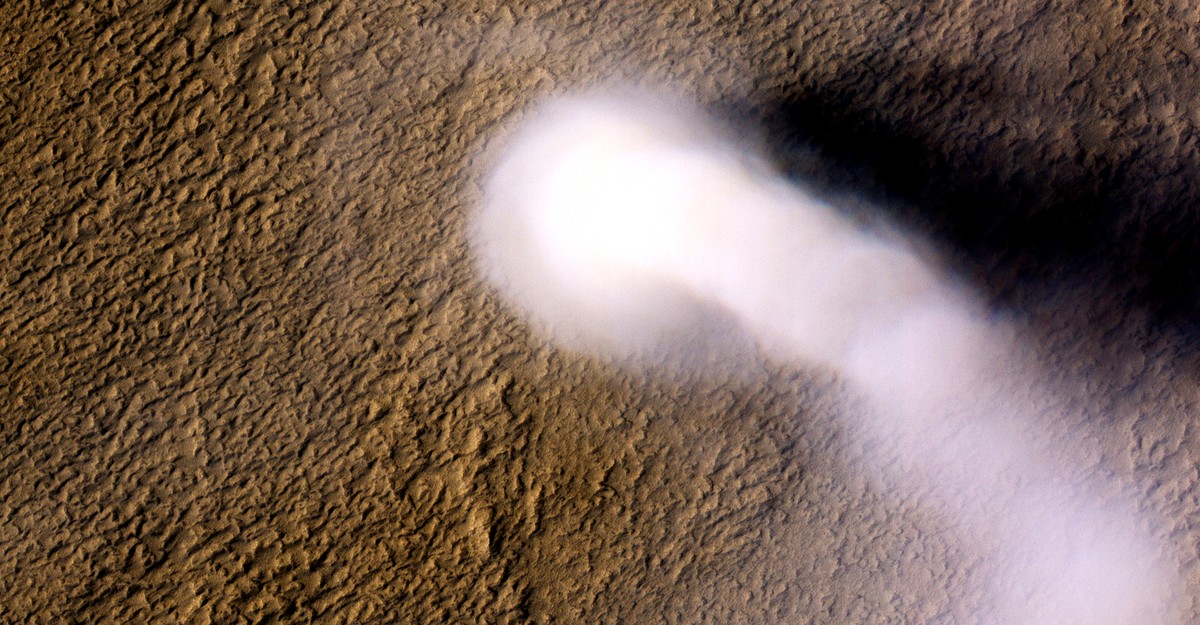 The Mars rover was out and about, doing its normal rover things inside one of the red planet’s craters, when there was a sudden shift in the atmosphere. A vortex of air and dust had swirled into shape, and it was fast approaching. The rover, named Perseverance, didn’t move from its spot. The whirlwind slammed into the robot, tiny particles pinging its exterior. Within seconds, the bombardment was over, and the vortex was gone.

Perseverance was fine. Although the dusty column of air was nearly 10 times wider than the rover and about 55 times as tall, the whirlwind wasn’t strong or dense enough to tip a spacecraft over. In fact, Perseverance was more than fine, because its microphone was on. In the midst of the windy commotion, Percy managed to do something historic: capture the sound of a Martian dust devil for the first time. You hear the usual calm of Mars, the low hum of wind, a flurry of fine grains hissing and crackling upon impact, and then quiet again as the plume twirls away.

Scientists had hoped to catch this sound bite ever since Perseverance arrived last year, tasked with searching for fossilized Martian life, and switched on its mics. So much of space exploration is about precision, and many scientific findings are products of careful calculations, sophisticated engineering, and telescopes directed just so. But some findings—perhaps the most wondrous of all—are serendipitous, a matter of just happening to be in the right place at the right time. And in a place as enormous as the solar system, happening to be around for surprises like this one can feel extra special. “We really hit the jackpot with this encounter,” Naomi Murdoch, a planetary scientist at the University of Toulouse, in France, and the lead author on the study that published the new recording, told me.

Dust devils are common on Mars, forming in the same way they do on Earth, when warm air near the ground rises into cooler air above it. Scientists can’t predict exactly when these dust devils will happen on either planet, but they can and do maximize Perseverance’s odds of crossing paths with one of these short-lived little tempests. They plan the rover’s observations for the middle of the day, when dust devils are more likely to spiral up. They point the machine in the direction of the prevailing wind, which dust devils like to follow. They cue up Percy’s microphone, which isn’t always rolling because the rover’s other science instruments take precedence over listening devices. (The mic involved in this finding records less than three minutes of audio at a time, and these sessions occur only about eight times a month.) “Then we cross our fingers,” Murdoch said.

The rest is up to Mars. “We estimate that a single microphone observation in the midday period—the time of day when there is the most dust-devil activity—has only a one in 200 chance of recording a dust devil like the one we encountered,” Murdoch said. And yet, this time, it actually worked out—and, combined with other readings from the rover, gave scientists a picture of the dust devil. Murdoch and her team even used the clip to estimate how many dust particles the plume contained, “a completely new measurement on Mars,” she said.

It may sound dramatic to get this excited about, you know, wind, but in a dry, barren world like Mars, wind is kind of a big deal. Wind is “the most active, noticeable process” on Mars today, Nina Lanza, a planetary geologist at Los Alamos National Laboratory who works on the Perseverance rover, told me. Its influence is everywhere—on the smooth surface of rocks and pebbles, along the soft edges of cliffs, in the rippling patterns of dunes. “Understanding how it works gives us real insight into what is going on on the surface of Mars today,” Lanza said.

The Martian wind has proved serendipitous before. Two other NASA rovers, Spirit and Opportunity—now defunct—lasted longer than expected thanks to dust devils, which acted like windshield wipers, clearing away particles that had settled on the machines’ solar panels. The extra time allowed the rovers to explore more of the Martian surface, collecting data as they went. A NASA lander, InSight, hasn’t been so lucky; the mission posted up in a less windy part of Mars, and its panels became so coated in dust this year that it likely won’t survive the next several months.

The story of space exploration is full of accidental discoveries, some more significant than others. The astronomer William Herschel was trying to examine faint stars when he found Uranus, in 1781. The astronomer Jocelyn Bell was observing distant galaxies in 1967 when she stumbled upon radio signals from a pulsar, an astrophysical object no one had detected before. The sound of a Martian dust devil will not rewrite astronomy textbooks, but it is a reminder that the cosmos is full of surprises big and small. Sometimes, we just have to get lucky and run into them—or, in the case of a winding, billowy dust devil, wait for it to run into us.

The post Space Exploration Could Always Use a Little Serendipity appeared first on The Atlantic.