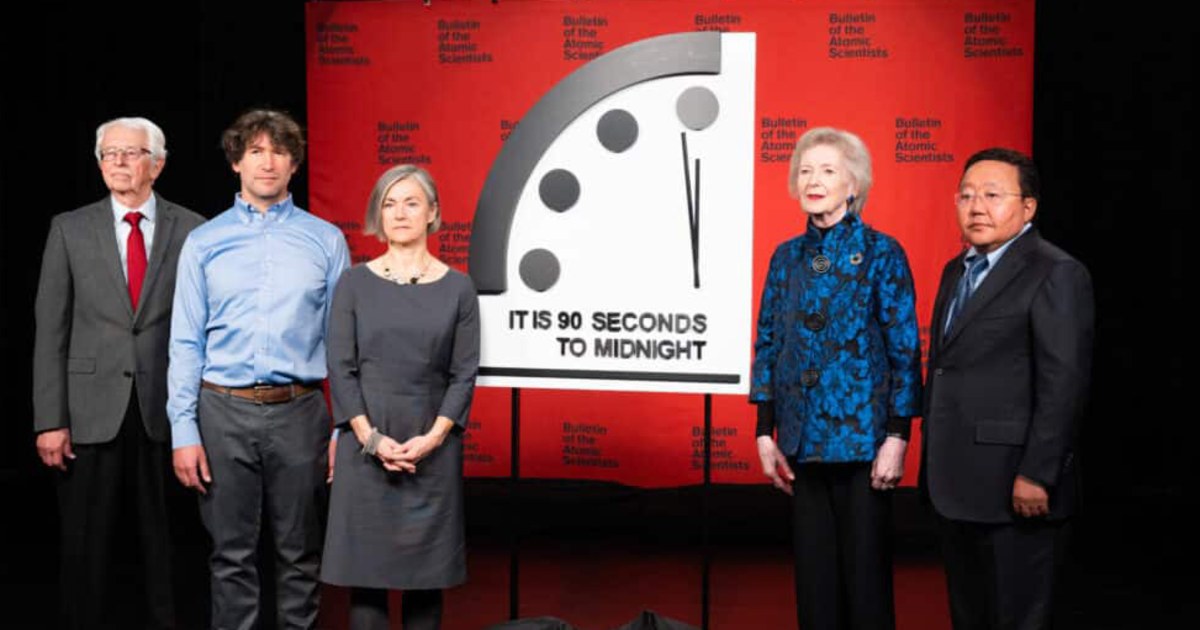 The hands of the Doomsday Clock are closer to midnight than ever before, with humanity facing a time of “unprecedented danger” that has increased the likelihood of a human-caused apocalypse, a group of scientists announced Tuesday.

The Bulletin of Atomic Scientists — a nonprofit organization made up of scientists, former political leaders and security and technology experts — moved the hands of the symbolic clock 10 seconds forward, to 90 seconds to midnight.

The adjustment, made in response to threats from nuclear weapons, climate change and infectious diseases such as Covid-19, is the closest the clock has been to symbolic doom since it was created more than 75 years ago.

“We are living in a time of unprecedented danger, and the Doomsday Clock time reflects that reality,” Rachel Bronson, president and CEO of the Bulletin of the Atomic Scientists, said in a statement, adding that “it’s a decision our experts do not take lightly.”

The Doomsday Clock was created to convey the proximity of catastrophic threats to humanity, serving as a metaphor for public and world leaders, rather than a predictive tool. When it was unveiled in 1947, the clock was set at 7 minutes to midnight, with “midnight” signifying human-caused apocalypse. At the height of the Cold War, it was set at 2 minutes to midnight.

In 2020, the Bulletin set the Doomsday Clock at 100 seconds to midnight, the first time it had moved within the two-minute mark. For the next two years, the hands were left unchanged.

The Bulletin’s scientists warn that humanity is getting closer to catastrophe.

In particular, Russia’s invasion of Ukraine has increased the risk of nuclear escalation, they said. As the United States, Russia and China are modernizing their nuclear arsenals, there are also expanding nuclear threats from North Korea, India and Pakistan, said Steve Fetter, a professor of public policy at the University of Maryland and a member of the Bulletin’s science and security board.

“From almost every perspective, the risk of nuclear catastrophe is higher today than last year,” Fetter said Tuesday at a news briefing.

The climate crisis also remains a major threat, with the Bulletin’s scientists noting that while carbon dioxide emissions fell in 2020 because of coronavirus lockdowns around the world, they rebounded to record highs in 2021 and increased again in 2022. With climate change still causing extreme weather events, Sivan Kartha is a senior scientist from the Stockholm Environment Institute. He also serves as a member on the Bulletin’s science and security boards.

Kartha said, however that the innovation in renewable energy and strong engagement by younger generations have made a difference. They are both pushing for greater climate action.

“There’s a generation growing up now, a generation that will be our leaders in the future, that is fired up about climate change,” Kartha said. “They’re concerned about it as a personal issue.”

In addition to addressing the consequences of global warming, countries should mitigate the risks of infectious disease outbreaks and other biological threats, according to the Bulletin scientists.

The Bulletin of Atomic Scientists was founded in 1945 to examine global security issues related to science and technology. The group meets with sponsors each year to discuss the most urgent threats facing the world and determine the Doomsday Clock.

This year the group hopes the Doomsday Clock will sound a warning to world leaders as well as the general public.

“The Doomsday Clock is sounding an alarm for the whole of humanity,” said Mary Robinson, chair of the nongovernmental organization The Elders and a former United Nations high commissioner for human rights. “We are on the brink of a precipice.”

The post Scientists set Doomsday Clock closer to midnight than ever before appeared first on NBC News.