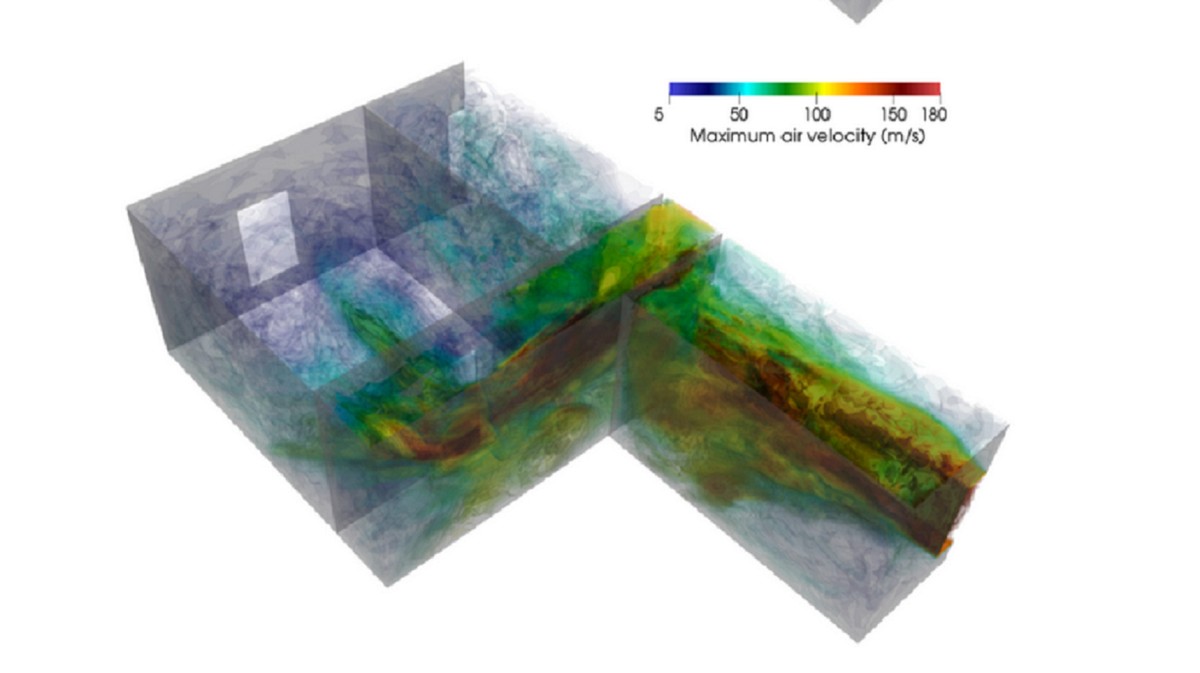 Nuclear bombs are the most devastating weapon on the planet. The blast from the explosion generated by Russia’s “Satan II” nuclear missile would destroy all of Central Park. But, for those outside of the immediate blast range, nuclear explosions are survivable, even if the powerful winds generated by a nuke have the potential to kill thousands. Now, researchers  from the University of Nicosia, Cyprus have used computer models to study the impacts of nuclear blast winds on the human body and the buildings they’ll be sheltering in when the big one comes.

The study, called “Nuclear Explosion Impact on Humans Indoors” and published in Physics of Fluids on Tuesday, is a deep dive into how high speed winds impact shelter and the human body. Nuclear war experts divide the immediate areas around a nuclear explosion into three segments. There’s the Severe Damage Zone, the Moderate Damage Zone, and the Light Damage Zone. People and buildings in the first will mostly be obliterated. Those in the last may sustain light injuries, most that won’t be life threatening. It’s in the Moderate Damage Zone where life is most precarious. Radiation persists, and concrete structures—and humans—can survive. This zone is the focus of the study.

According to the researchers, the main danger comes from structures briefly acting as wind tunnels for the powerful nuclear winds.

“The primary danger to human survivability in indoor spaces becomes the extreme high-speed winds that enter through the various openings in the building, e.g., windows” the study said. In addition, the propagation of shock waves indoors will interact with walls and deflect around corners, doors and obstacles. These interactions may induce higher pressures due to channeling effects, thus increasing the injury risk.”

“If people see the explosion from far away, they must take shelter ASAP,” Dimitris Drikakis, a professor at the University of Nicosia and one of the authors of the study, told Motherboard. “If they are at the window, they should run away from it inside the building and take shelter in a room without openings or in the corners of the rooms/corridors.”

Basically, if you see a nuclear blast on the horizon, get to the back of a building you’re in and stay away from doors, windows, and hallways. According to the study, hallways and doors will briefly accelerate the overpressured winds as they move through a home. This effect will be brief, just half a second, but the force of the winds is high enough that it can damage the human body. The effect will be worse around hallways, windows, and doors.

For the study, the scientists used computer models to simulate overpressure, or the level of pressure that follows a blastwave after a nuclear explosion. The simulation used a 750 kiloton (kt) atomic warhead. At that yield, the Moderate Damage Zone would start around 2.5 miles from the detonation and extend for more than 30 miles.The nukes the U.S. dropped on Hiroshima and Nagasaki were around 20 kt, and the weapons have gotten far bigger since. Several weapons in the U.S. and Russian arsenals have yields greater than 750 kt, and the researchers said they had Russia’s Satan II intercontinental-ballistic missile (ICBM) in mind when they designed the study.

The simulation assumed an explosion of 750 kt and looked at pressures between 3 and 5 psi in the resultant blastwave. At that pressure, the effects on the human body would be pronounced.

“The force hitting a standing person indoors is equivalent to several g−forces of body mass acceleration and could lift a person off the ground and throw them to the walls,” the study said. At an overpressure of 3 psi, the acceleration can reach 80 g’s, while at 5 psi, the acceleration exceeds 140 g’s. However, there are areas inside the rooms where the airspeed and the associated forces are reduced.”

Russia’s escalated war in Ukraine, China’s new ICBM sites, and America’s push for building new plutonium pits have all renewed the fear of nuclear weapons. Last year, New York City released a public service announcement detailing what city dwellers should do in case of nuclear war. Drikakis said that the team started working on the study after the war in Ukraine began.

“The motivation emerged from the debate in the media in the past year about a possible nuclear war,” Drikakis said. “Moreover, there was no previous study showing the effects of wind forces on humans indoors in the moderate damaged zone, where humans have a chance to survive inside a building which has not collapsed from the explosion.”

“We ought to raise awareness of the detrimental effects of nuclear explosions and make every effort to prevent them from happening,” he said. “The study helps understand the enormous forces transported by a nuclear blast, even inside a building in a moderate damaged zone.”

The post Scientists Determine Best Place to Stand In Your House When a Nuke Hits appeared first on VICE.