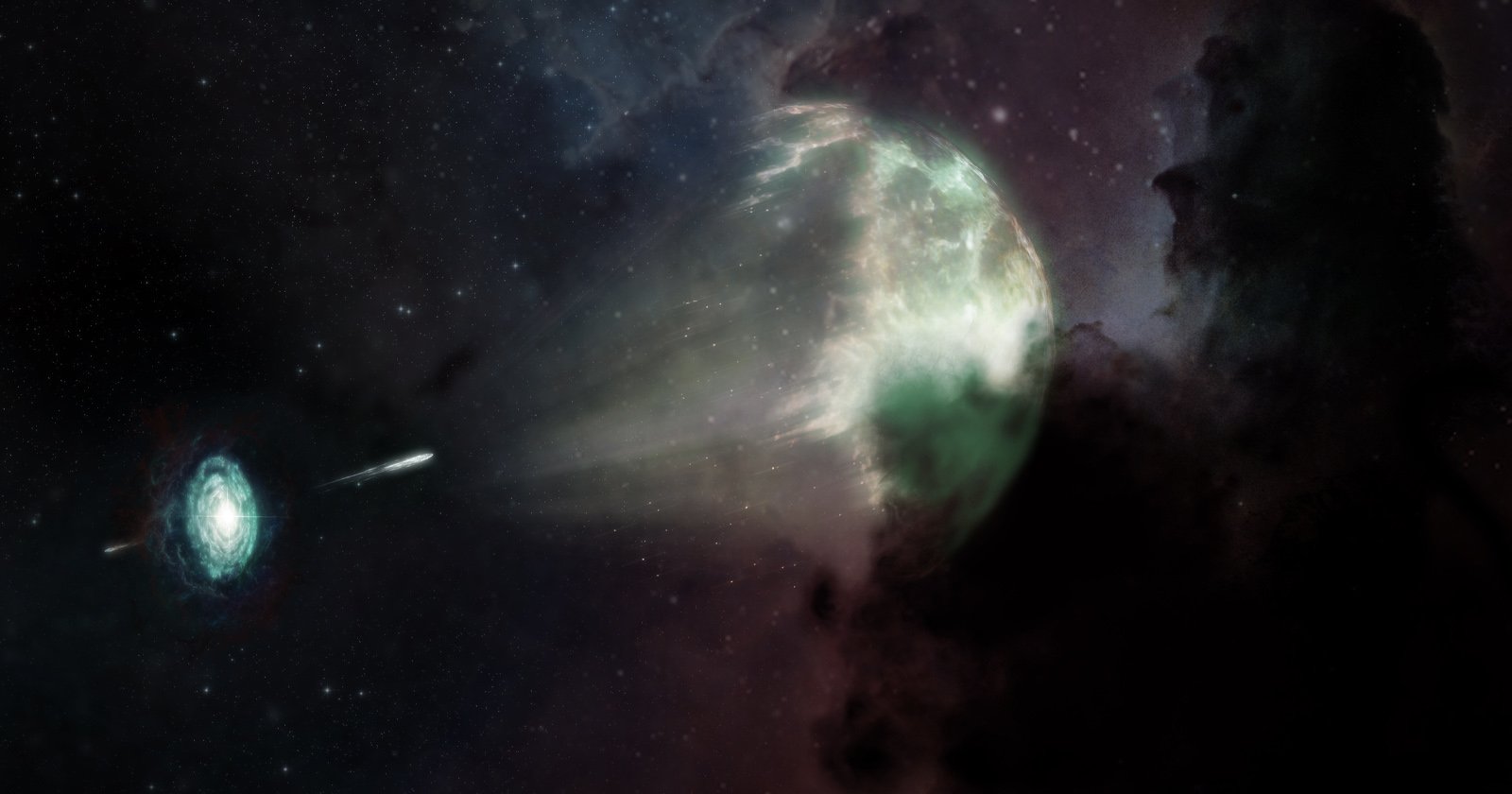 Scientists have, for the first time, recorded a millimeter-wavelength light explosion caused by the merging of a neutron star with another star.

Not only is this the first time that scientists have successfully recorded a neutron star merger, but the team also confirmed the resulting flash of light is one of the most energetic short-duration gamma-ray bursts ever observed, leaving behind one of the most luminous afterglows on record.

The team, led by Northwestern University and Radboud University in the Netherlands, used the Atacama Large Millimeter/Submillimeter Array (ALMA) to make the observation. Located in the Atacama Desert in Chile, the ALMA array is made up of 66 radio telescopes, making it the largest such telescope in the world.

“This short gamma-ray burst was the first time we tried to observe such an event with ALMA,” Northwestern’s Wen-fai Fong, principal investigator of the ALMA program, says.

“Afterglows for short bursts are very difficult to come by, so it was spectacular to catch this event shining so brightly. After many years observing these bursts, this surprising discovery opens up a new area of study, as it motivates us to observe many more of these with ALMA and other telescope arrays in the future.”

As the National Radio Astronomy Observatory (NRAO) explains, gamma-ray bursts (GRBs) are the brightest and most energetic explosions in the universe and are capable of expelling more energy in seconds than the Sun will emit during its entire lifetime.

Short-term GRBs tend to last fractions of a second and while they expel a ton of energy and leave an afterglow — an emission of light caused by the interaction of the jets with surrounding gas — they are still difficult to detect and less than half a dozen have ever been detected at radio wavelengths. Until now, none had been detected in millimeter wavelengths.

“And, when combined with the X-rays, they can tell us about the true energy of the explosion. Because emission at millimeter wavelengths can be detected for a longer time than in X-rays, the millimeter emission also can be used to determine the width of the GRB jet.”

“What makes GRB 211106A so special is it’s not only the first short-duration GRB that we detected in this wavelength, but also, thanks to the millimeter and radio detection, we could measure the opening angle of the jet,” Rouco Escorial, study coauthor and postdoctoral fellow in CIERA, adds.

“The millimeter and radio bands provided us with information we needed to measure the jet opening angle. This is essential to infer the real rates of short GRBs in our universe and to compare them with the rates of binary neutron star or neutron star and black hole mergers.”

The explosion, called GR 211106A, that the scientists witnessed occurred when the Universe was still quite young: just 40% of its current age. As a result, the light from the explosion is incredibly faint.

” The light from the short-duration gammaray burst was faint enough that early Xray observations by NASA’s Neil Gehrels Swift Observatory detected the explosion. Scientists were unable to identify the source of the blast, so scientists couldn’t determine where it was coming from.

Afterglow light can be used to determine the source of a burst and learn more about it. Astronomers initially thought this burst was coming from a distant galaxy, but only the Xray counterpart had been found. Tanmoy Lakar will soon begin work at the University of Utah as Assistant Professor of Physics, Astronomy and Physics. He also said that the Hubble Space Telescope optical observations of the object revealed that there was a lot of dust around the region, which made it difficult to detect.

Laskar states that the Hubble observations showed an inexorable field of galaxies. Laskar says that ALMA’s unmatched sensitivity enabled us to locate the GRB within the field more precisely. It turned out to be located in a fainter galaxy which was further away. That, in turn, means that this short-duration gamma-ray burst is even more powerful than we first thought, making it one of the most luminous and energetic on record.”

The full research report on the observation will be published in an upcoming edition of The Astrophysical Journal Letters.