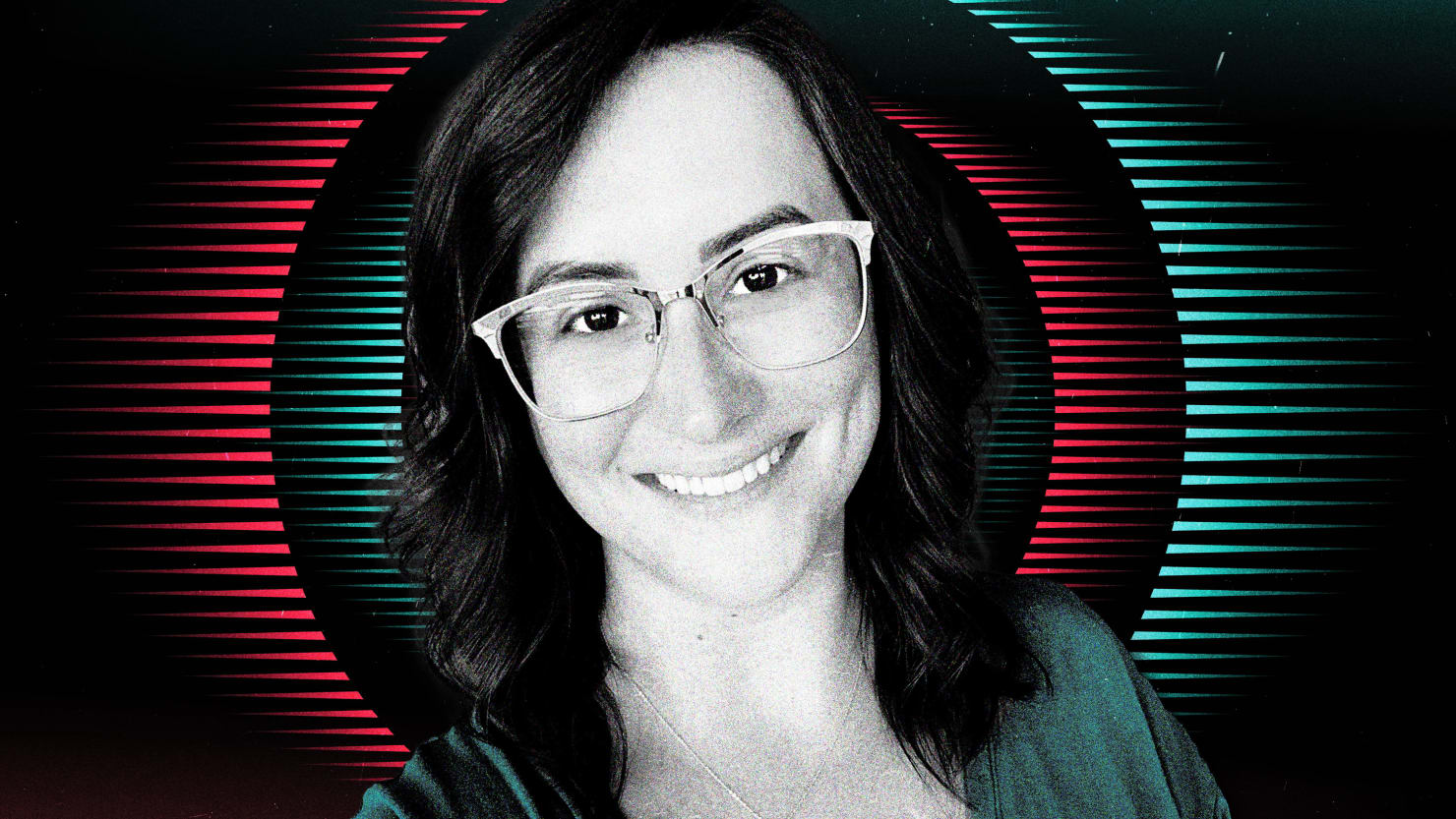 It’s hard to know what was going through Nancy Parrott’s head when the former ER technician from Oregon allegedly recorded the sounds made by a patient and decided to post a video to Twitter with the caption: “When a patient has poor coping skills.” But the backlash that followed was swift.

Within a month Salem Health, Parrott’s employer, put out a statement that it had completed an investigation launched “in response to the viral video and inappropriate behavior” and that “the individual at the center of this incident no longer works for Salem Health.”

While the original video has been removed, the “viral video” the statement referred to is likely a TikTok made by Savannah Sparks that has been viewed more than 8 million times. Sparks exclaims, “Hey Boo!” before explaining that Parrott was identified through her Facebook profile. She then reached out to her employer regarding the video. And its conclusion: “You’re about to lose your job, Nancy.”

Sparks, 32, believes that if you’re bold enough to put it on the internet, she should be allowed to boldly respond.

Her online handle @rx0rcist was a play on “The Exorcist”, and refers to her pharmacy training. These days, however, she works as a board-certified lactation consultant-cum-internet sleuth, with over a million TikTok followers along for the ride. In a recent interview, Sparks described herself online as “part-time activist and part-time scientist communicator”.

Sparks is a unique example of someone who uses online technology to combat scientific misinformation. Sparks will debunk vaccine claims and discredit sloppy science using peer-reviewed literature. But more often than not, she is digging up an adversary’s online history–or oftentimes a criminal record–and telling the masses why a so-called “expert” is not to be trusted.

It’s the combination of her scientific background and knack for sleuthing that have made her a formidable force on and off social media. Her investigations have exposed fake COVID-19 vaccine card businesses, booted a vaccine skeptic from Team USA Paintball, and revealed that a U.N.-sponsored initiative had been duped by a TikTok user misrepresenting his credentials and experience online. And along the way, she has used her platform to shine a light on the unsavory online behavior of users like Parrott.

In the wake of the COVID-19 pandemic, many stars on social media rose up to combat scientific and medical misinformation, or reveal the skeletons that bad actors had in their closets. But Sparks has become a particular lightning rod for critics, some of whom disagree with her tactics and attitude, while others have animus for her that seems more personal. Though she publicly responds to some of the hate sassily, Sparks said she receives mountains of death threats, has had Child Protective Services called on her, and has been “swatted.”

Insider recently included her in an article about creators who “rage-bait” for views and followers, though Sparks denied engaging in the practice. Sparks’ tone can be described as too aggressive toward her subjects, and she is also too happy when she gets her desired result. Her investigation style is similar to “doxxing”, and onlyFans accounts show that she sensationalizes content in order to make money.

Sparks countered that many of these concerns, especially comments about her tone and mannerisms, smack of sexism. To those who say she’s motivated to call others out in order to build up her own platform, she’ll argue that there are many ways to grow an audience that don’t engender death threats from strangers on the internet.

And what about those who refer to her as an internet vigilante.

“I think people who don’t like accountability and don’t like change are quick to be dismissive of the type of work that I do by calling me one,” Sparks said. “But there has to be a solution for people who want justice.”

Sparks spoke to The Daily Beast over a video call from her home in Mississippi, where she moved during the pandemic. She was born and raised in South Carolina and is a friendly, warm-mannered mom. This time, her deep-v-neck and metallic glasses are paired with burgundy-colored sunglasses. Her eyebrows, which are always done, arch dramatically in a way that makes her resting face look naturally skeptical. It’s an expression that fits her expose videos well.

The third in her family to become a pharmacist (following her mother, now retired, and sister), Sparks was brought up in a science-minded family and “hadn’t really considered any other profession.” She started pharmacy school when she was 20, graduated at 24, and began working as a retail pharmacist. She found parts of the job to be a rude awakening: Older male patients didn’t respect her authority, and she heard stories of some pharmacists–including her mother–being robbed at gunpoint for opiates or stimulants.

“My immediate reaction without even thinking about it was to stand up to the people who were spreading misinformation and answering questions from on-the-fence people with data.”

In 2018, when she was six months pregnant, Sparks was physically assaulted at her workplace by a colleague. Afterwards, with her blood pressure skyrocketing, she was told that there was not enough coverage for her to go home and that she had to continue working.

Sparks stated that even though she had filed a complaint with her company’s HR department, it was “swept under the carpet.” This experience added to the stress she was feeling from working as a retail pharmacist. After going on maternity leave, she resigned the day before her return.

She was full-time caring for her child and downloaded TikTok during lockdown to keep herself busy. Sparks experimented with different content types, including jumping onto dance styles and sharing videos of the food she prepared for her child. Sparks experienced her first brush with virality when she posted a video using a trendy format to act out ending friendships with other moms after finding out they don’t support vaccinating their children.

” It was my first time and it received both overwhelming support and an overwhelming backlash by anti-vaxxers,” she stated. “My immediate reaction without even thinking about it was to stand up to the people who were spreading misinformation and answering questions from on-the-fence people with data.”

From there, Sparks carved out a niche in medical mythbusting, particularly by combating promoters of misinformation during the initial vaccine rollout. Creators like James Koncar advertised businesses for purchasing forged vaccination cards; according to Axios, Sparks called him out in March 2021, revealing social media posts where he used misogynistic and racist language. Six hours after her post went live, Koncar’s employer announced that he had been fired.

Emily Dreyfuss, the senior managing editor at the Harvard Shorenstein Center, told The Daily Beast that Sparks’ shift in fighting medical misinformation mirrors how conflict on the internet has evolved.

Figuring out the identities of people who peddled and posted about fake vaccine cards wasn’t rocket science, Sparks said. Sparks said that the cards displayed many of their holders’ names and birth dates. Sparks would watch videos from these other creators. These often showed clues such as hospital names tags and medical scrubs.

Over time, Sparks has expanded her digital toolkit, learning how to file Freedom of Information Act requests for government records and parsing through court documents for information on some of her subjects. She said that she had never submitted a FOIA before being on social media. I didn’t even know what that was until somebody did it to me to try and get my address from my pharmacy license.”)

“Creators like her might be doing a service. I think that they’re a reflection of the shape of the media ecosystem right now.”

She’s also sharpened her ability to notice the finer details. In the case of the creator who misrepresented himself as a esteemed field epidemiologist, Sparks noticed tassels in the background of a video but no diploma, and outdoor shots that seemed to locate him in a different state than where he purported to live.

Dreyfuss, a longtime journalist who’s worked as a writer and editor for outlets like CNET and WIRED, said that she’s seeing a growing awareness of these kinds of journalistic research techniques.

“Journalistic reporting techniques are and always have been available to anyone,” she said. “Now with social media, there’s this sense that people can become their own [open-source intelligence] investigators.”

Dreyfuss added that one of the things that may draw people to Sparks is transparency. Journalists present revelations, but often omit how they got there. But viewers can trace exactly how Sparks came to her conclusions, because they’re there for the ride.

“Creators like her might be doing a service,” she said. “I think that they’re a reflection of the shape of the media ecosystem right now, and a recognition that readers and the public don’t necessarily draw the line between the individual creator versus a news organization anymore.”

Sparks isn’t exactly beloved for her no-holds-barred, brash persona. Her videos are often stitched by her critics, and she even has an entire subreddit dedicated to “snark” for her.

Jonathan Torres-Herera, a TikTok creator who hosts an online social commentary show, derisively calls Sparks and other creators members of a TikTok “Justice League.” He toldThe Daily Beast he thinks these creators use their platforms recklessly to publicly shame people who are not public figures.

More perniciously, he added, the public details of these “Justice League” investigations encourage followers to start harassing the subjects and threaten them with violence.

After posting a video criticizing Sparks and two other popular creators, Torres-Herera said he’s experienced some of this same harassment. “The point of my videos is to hold them accountable, to make sure that they’re also judged by the same set of rules that they judge others,” he said. “I don’t know that I’ve gotten death threats, but I’ve gotten pretty close to that.”

Sparks said that she has never condoned acts of violence or sending death threats. Accusations of hypocrisy do not phase her: “I am held to an impossible standard,” she said. Others, who dig up her past, point to the fact that she voted for Donald Trump in 2016. Although she admitted that it was true, she said that this is not in line with her current values.

“For me, there has to be a solution for all of the victims in these instances, especially because our government’s not really doing anything about it, and the police sure as hell aren’t doing anything positive about it.”

“If that is what people want to use to negate the work that I’ve done, they are free to do that,” Sparks said. “I am going to focus on more important things, like putting shitty people in jail.” Some subjects of her investigations are already awaiting trial for crimes like impersonating a medical provider and domestic violence.

That’s a pretty bold statement–and a sign of where Sparks sees her activities moving into. And it aligns with her experiences online thus far: Forming friendships, she said, wasn’t the point, while making enemies was practically guaranteed.

“For me, there has to be a solution for all of the victims in these instances, especially because our government’s not really doing anything about it, and the police sure as hell aren’t doing anything positive about it,” Sparks said. I believe that is why people tend to gravitate to content such as mine. How do we get justice for these people when nobody else seems to care?”

The post Savannah Sparks Is TikTok’s Most Polarizing Medical Misinformation Sleuth. She doesn’t care. appeared first on The Daily Beast.