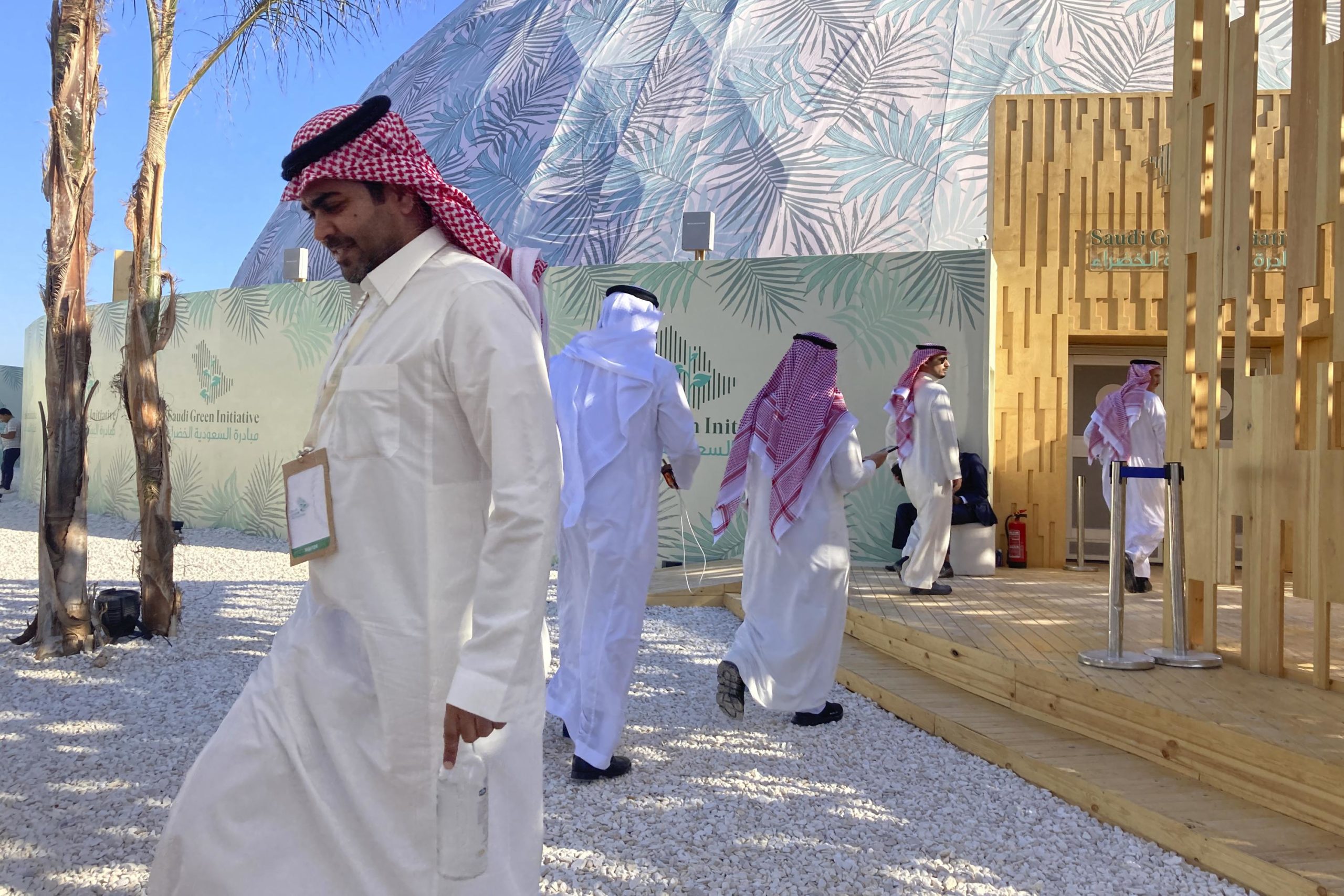 SHARM EL-SHEIKH, Egypt — Hydrogen cars and vehicles that capture their tailpipe pollutants. Computer mice made from recycled ocean waste plastic. There are hundreds of millions of trees that have been planted in the desert. Only a few minutes from Egypt’s venue for the U.N. Climate Summit, Saudi Arabia is displaying its vision of an environment-friendly future.

What’s not highlighted in the glossy gallery are the earth-warming fossil fuels that the country continues to pump out of the ground for global export. Fossil fuel emissions are the reason why negotiators from nearly 200 countries have gathered at the annual two-week conference, haggling over how pollution can be cut and how fast to do it. Saudi Arabia, a world leader in eco-friendly technologies and green energy, is making a strong impression at the conference. There are bright pavilions, presentations, and hopeful assessments about carbon capture technology, but it is expensive and many years away from becoming widely used.

“We have hugely ambitious goals and targets,” Saudi climate envoy Adel al-Jubeir said at the two-day Saudi Green Initiative Forum on COP27’s sidelines. “We want to be an example to the world in terms of what can be done.”

The effort is part of a large push by Saudi Arabia, which has some of the world’s largest reserves of oil and is a leader of the OPEC oil cartel, to make the case that the nation should be part of the transition to renewable energies while holding on to its role as the top global crude oil exporter. That vision is sharply contested by climate scientists and environmental experts, who argue that Saudi Arabia and other countries with large reserves of oil simply want to distract the world to continue with business as usual. The Saudi energy minister, Prince Abdulaziz bin Salman al Saud announced new or updated green projects, including tree planting pledges and solar energy project development.

Crown Prince Mohammed bin Salman launched his Saudi Green Initiative at last year’s COP26 conference in Glasgow, Scotland, with a target for “net zero” greenhouse gas emissions by 2060, which he changed to 2050 at the start of this year’s meeting.

Still, energy exports are the Saudi economy’s mainstay, earning $150 billion in annual revenue, despite efforts to diversify revenue as the global transition away from fossil fuel reliance accelerates. At the Saudi forum officials and guests from renewable energy companies spoke out on topics such as clean hydrogen and greening deserts.

State-owned oil giant Saudi Aramco’s CEO, Amin Nasser, said the world needs more investment in oil and gas, not less, a message at odds with the sentiment among many country delegations and climate experts and activists attending COP27.

“I’m concerned because of lack of investment in the oil and gas in particular,” said Nasser, touching on a frequent theme. Saudi Arabia is resisting calls for an urgent phasing out of fossil fuels. They claim that this has caused price rises and shortages.

“Yes, there is good investment happening in the alternatives,” such as wind and solar power, he said, adding that the amount of money spent on oil production capacity has fallen to $400 billion a year from $700 billion in 2014. “That’s not enough to satisfy global demand over the medium to long-term,” he stated. A spokesperson for Aramco said that Nasser was not available to interview.

Among Saudi announcements was the establishment of a regional centre to “advance emission reductions” as well as one that would host a regional climate week in advance of the next year’s COP conference.

There’s also a plan for 13 renewable energy projects with a total generating capacity of 11. 4 gigawatts, though experts said that’s a step back from numbers announced in previous years.

Once they’re up and running, the new energy projects will cut carbon dioxide emissions by about 20 million tons a year.

Saudi Aramco plans to build the world’s biggest carbon capture and storage hub, which will store up to 9 million tons of carbon dioxide when its up and running in 2027.

It’s all part of the kingdom’s pledged to cut emissions by 278 million tons a year by 2030. That’s still small compared to about 10 billion metric tons of carbon spewed globally into the air annually.

The kingdom also upgraded its tree planting goal to 600 million by 2030, including mangroves, up from its 450 million initial target.

“Saudi Arabia would be better placed to focus on cutting emissions rather than relying on carbon capture and storage and questionable reductions from planting trees, the offsets of which would simply allow them to continue increasing emissions from burning fossil fuels,” said Mia Moisio, a an energy policy expert focusing on Middle East and North Africa at the New Climate Institute think tank.

“To keep emissions on a 1. 5@C pathway, all governments must focus on cutting fossil fuel emissions, not offsetting them.”

The Climate Action Tracker, operated by the institute and its partners, rates Saudi Arabia as “highly insufficient.”

The tracker analyzes nations’ climate targets and policies compared to the goals of the 2015 Paris Agreement that spells out ideally limiting the Earth’s temperature rise to 1. 5 Celsius (2. 7 Fahrenheit).

Saudi authorities are promoting what they call a “circular carbon economy” to cut emissions from oil and gas operations, but the tracker says this it “only addresses a fraction of relevant emissions in Saudi Arabia and globally, as most emissions related to oil and gas come from fuel combustion rather than extraction and processing.”

Saudi Arabia’s oil and gas assets spew 900 million tons of emissions a year, according to an inventory of top known sources of greenhouse gas emitters compiled by the Climate TRACE coalition and launched at COP27.

There’s also a plan for a greenhouse gas crediting and offsetting scheme next year, with few details. Carbon credits, which allow countries and companies to pay to reduce their carbon footprints, say by planting trees, have become increasingly controversial, with critics saying they’re a license for polluting companies to keep polluting.

At least year’s talks in Glasgow, Saudi Arabia faced accusations that its negotiators were working to block climate measures that would threaten demand for oil – a charge that the energy minister called a lie. Watchdog organizations warned of the power and influence exerted by industry lobbyists and petrostates as negotiations for the final agreement enter their final week. They counted 636 people linked to fossil fuel companies on the meeting’s provisional list of participants, a quarter more than last year’s tally.

“The Saudis may well be coming to COP27 with a green hat on and extolling the virtues of planting trees, but this is a state that continues to profit wildly from the destructive practices causing the climate crisis,” said Alice Harrison, a campaigner at Global Witness, one of the groups that did the count. “Any exhibitions, talks or shows to the contrary are pure greenwashing.”