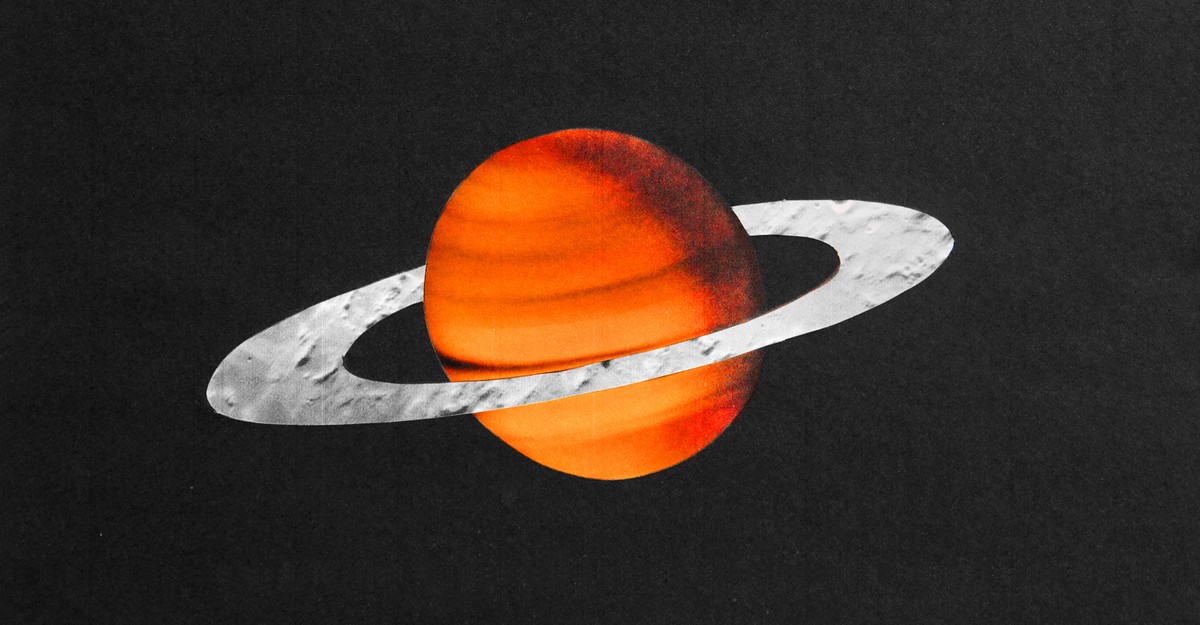 Saturn has quite the collection of moons, more than any other planet in the solar system. There’s Enceladus, blanketed in ice, with a briny ocean beneath its surface. Iapetus is half dusty, dark and shiny, the other half bright and shining. There are Hyperion, a rocky oval that bears a striking resemblance to a sea sponge, and Pan, tiny and shaped just like a cheese ravioli.

According to a new study, Saturn once had yet another moon, about the same size as Iapetus, which is the third-largest satellite in Saturn’s collection. The moon orbited the ringed planet for several billion years, minding its own business, doing moon things, until about 100 million to 200 million years ago, when other Saturnian moons started messing with it. The interactions between them pushed the unlucky moon closer to Saturn–too close to remain intact. It was ripped apart by gravity.

Something remarkable might have come out of all this. Although most of the debris from the moon fell to Saturn’s atmosphere and remained there, some pieces of it hung on, spinning around until they became a delicate, thin disk. This lost moon, the authors of the study say, is responsible for Saturn’s trademark feature: the rings.

These astronomers didn’t set out to find a missing moon. They were trying to better understand why Saturn is the way it is now–specifically, why the planet is tilted just so. “Planetary tilts are an interesting indicator of a planet’s history,” Zeeve Rogoszinski, an astronomer at the University of Maryland who was not involved in this recent work but who studies orbital dynamics, told me. Most of the planets in our solar system spin at an angle relative to the plane in which they orbit the sun. For example, Earth’s tilt is due to the collision of , which scientists think . might have caused. The influence of Jupiter is responsible for Mars’s chaotic tilt. Uranus likely got its dramatic lean after the planet was whacked with a massive rocky object a few billion years ago.

Astronomers have known for years that Saturn owes its particular tilt to gravitational interactions with Neptune. Brynna downey (UC Santa Cruz planetary scientist and author of this study) said that Saturn is a spinning top and the speed at which it rotates is in line with Neptune spinning around. It’s hard to see how they could affect one another, but it does.” Scientists refined the picture using Cassini data. They also found that Titan, Saturn’s largest moon plays an important role in this. Titan’s drift away from Saturn is quite rapid, and this withdrawal is enough to influence the planet and create that link with Neptune.

Downey and her colleagues sought to investigate these phenomena more deeply, using measurements of Saturn’s interior taken by the Cassini mission, which ended five years ago when NASA deliberately sent the probe careening into the ringed planet’s atmosphere. This is how space exploration is sometimes .). Their work showed that Saturn appears to be slightly out of sync–or resonance, in astronomy terms–with Neptune. And they wondered, how on Earth–er, Saturn–did that happen?

The researchers then ran computer simulations. They rewinded the Saturnian tape and played with orbital dynamics in order to recreate the new configuration. After trying out all manner of what-ifs, the team could only explain it this way: A long-lost moon once tugged at Saturn, helping it maintain its cosmic vibe with Neptune, until the moon was kicked out of its orbit. Downey stated, “It wasn’t expected.” “It’s much more common to say, ‘Here’s this really niche, very particular resonance of some kind that very few people have heard of.'” But “none of that worked,” she said.

The researchers say the moon’s demise was mostly Titan’s fault. It jostled Titan’s smaller moon, which put the large object on an extremely long track around Saturn. The new orbit was “so elliptical that the moon has a close encounter with Saturn, and Saturn then rips it apart,” Jack Wisdom, a planetary scientist at MIT who led the latest study, told me. According to a press release ,, “it blossomed into rings much like a chrysalis turns into a butterfly.” (a neat framing that doesn’t ignore the Titan-being-a-jerk part).

This claim fits somewhat neatly into one side of a major controversy over the rings’ origins. Some scientists think the bands arose billions of years ago from the raw materials of the early solar system that created Saturn itself. Others say the rings appeared much later, when some celestial object got too close to the planet, as recently as 100 million years ago. This is what astronomers consider “recent”. Cassini data support the latter theory, and astronomers seem to be coming around to it, including those who worked on the new findings. For them, Saturn’s behavior, the missing moon, the gleaming disk of icy chips and chunks we see today–“everything lines up,” Wisdom said.

But Saturn’s missing moon is hypothetical, and the effect of its loss on Saturn is only a theory, one that must stand up to scrutiny from other teams. Last year, a group of scientists published research on Saturn’s tilt that determined how fast Titan was moving away from the planet, but their work was premised on the idea that Saturn remains in resonance with Neptune. In that case, there was no need to invent a mechanism that would have knocked it out of sync. Wisdom and his team’s findings present an appealing scenario, but “this story needs a fine-tuning of all the elements at play,” Giacomo Lari, a research fellow at the University of Pisa and one of authors of the study from last year, told me. Where Wisdom sees a well-reasoned narrative, Lari and his colleagues see “a succession of unlikely events.”

The tricky part about understanding Saturn–or any planet–is that change happens on far greater timescales than we human beings are capable of comprehending. The solar system is only what it is right now. This is a tiny fraction of cosmic history. So we rely on the measurements we have and imagine pasts that might have been, weighing potential theories that could explain what’s out there today. “Unless you travel back in time 4 billion years and observe the evolution of the solar system, you’ll never really know,” Rogoszinski said. “That’s all we can really say, is you have two models; one works so much better than the other.”

A couple of weeks ago, I did my own, very unscientific check-in with Saturn using a telescope that my neighbor had set up on the roof of our apartment building. It looked the same as it always does, like a little bumblebee in the darkness, its bright rings jutting out like wings on either side. Tell us your secrets, Saturn! I thought. I thought.