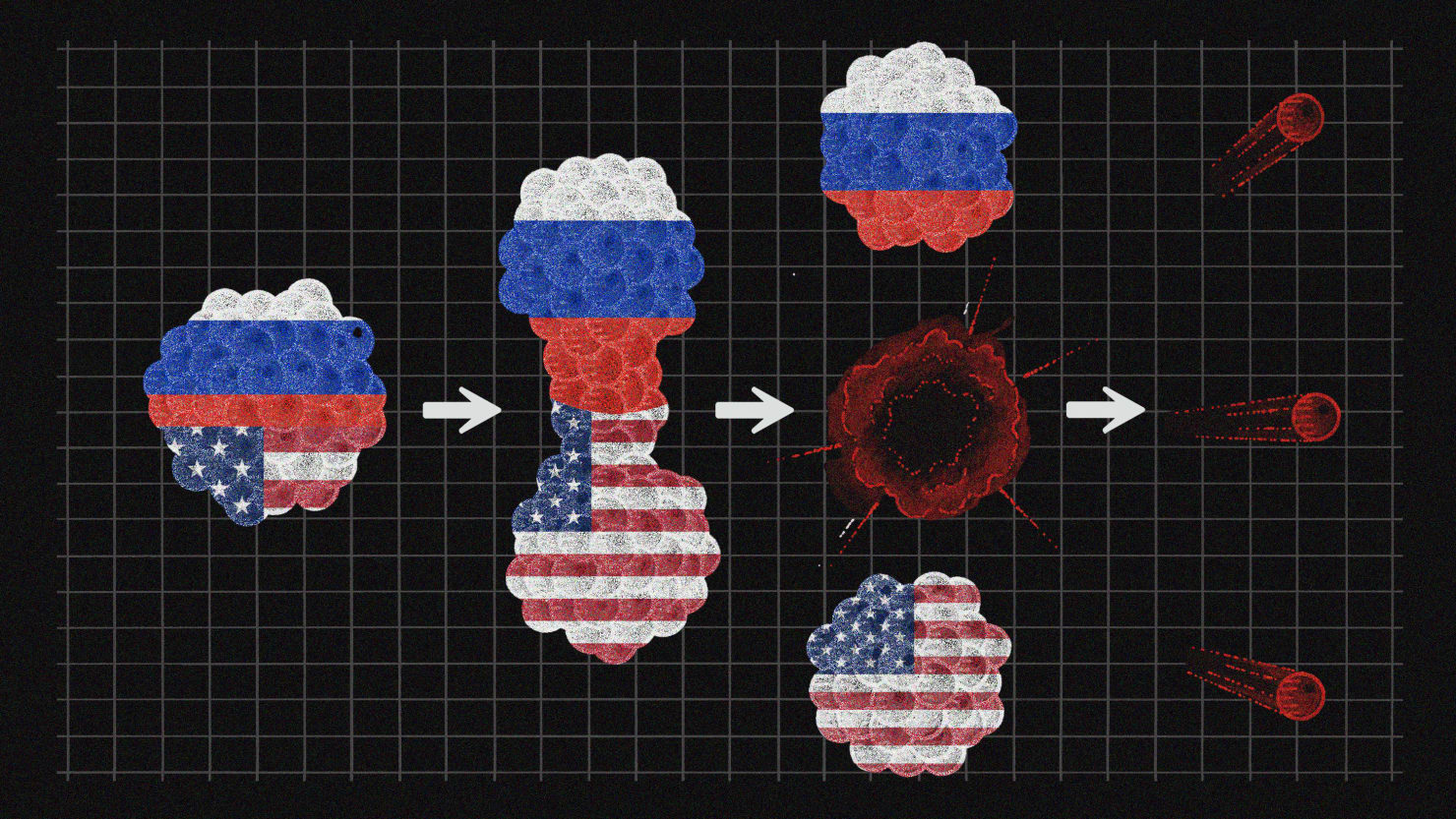 Last week, 10 months after Russia invaded his country, Ukrainian President Volodymyr Zelensky made an uncertain trip to Washington, D.C. to ask the U.S. for additional aid to finally end the conflict–which continues to stoke fears over environmental catastrophe in the wake of Russian attacks on Ukraine’s nuclear power plants, as well as Russian threats over the use of nuclear weapons. Zelensky also asked for the U.S. “to increase tariffs against Russia” and make the conflict financially insurmountable. This would particularly affect areas of science and technology research where Russia has traditionally excelled, including physics, space exploration and climate science.

But despite widespread Western support for Ukraine, it has proven difficult to disentangle U.S. scientific and technical collaborations with Russia. Many cases of resistance are coming from American scientists, who claim that their work and those of their collaborators is too crucial and urgent to be disrupted, especially in relation to climate change research, as the world’s warming speed increases.

Days before Zelensky’s speech, an editorial published in Nature magazine urged that science not be treated like a “diplomatic pawn,” and the war “must not become a barrier to countries working together” on to tackle pressing scientific issues such as climate change. Physicist Michael Riordan from the University of California, Santa Cruz espoused a similar sentiment in The New York Times back in late August, proclaiming, “I’m a physicist who doesn’t want Russia to leave the world of science.”

Others see things differently. “During the Cold War, Russia was a science powerhouse,” Marcia McNutt, president of the National Academies of Sciences in the U.S., told The Daily Beast. “But since the fall of the Soviet Union Russian science has not been as strong. When you look at the big issues of the day, like gene editing, I just don’t see Russia as being in the forefront.”

At the same time as Russia’s scientific contributions have weakened, Ukraine has risen up as a leader in science in Eastern Europe and former Soviet states, particularly in areas of agriculture research and nuclear power.

When Russia first invaded Ukraine last February 24, Europe responded swiftly to cut ties with Russia, and that included science and tech endeavors. Germany announced that it was ending all scientific collaborations with Russia the very next day, and other European Union member nations soon followed with similar comprehensive bans. CERN, a multinational particle physics lab in Switzerland and home to the famed Large Hadron Collider, suspended Russian membership in early March, as did the European Space Agency and the Max Planck Institute. ESA’s action was particularly important as the joint Mars rover mission it had with Russia is now in complete uncertainty ..

“When you look at the big issues of the day, like gene editing, I just don’t see Russia as being in the forefront.”

In contrast, the U.S. scientific community’s response has proceeded somewhat unevenly. The Biden administration remained silent on the status of U.S.-Russia collaborations until June. They announced in June that all U.S. federally-funded research projects being partnered with Russia would be “windowed” and they had banned any new ones.

“Considering the war crimes and other atrocities Russia has perpetrated it was very important for us to make an unequivocal statement of support for Ukraine,” a government official who was involved in the discussions but has since moved to another job in the administration, told The Daily Beast on the condition of anonymity.

“But at the same time,” the official said, “we acknowledge there is a strategic need to engage with Russia” in order to avert the kind of global destruction that loomed over the Cold War.

Since the beginning of the war Russia has targeted Ukraine’s scientific infrastructure. Ukraine’s Institute of Physics and Technology in Kharkiv has been heavily damaged by Russian bombs. Russian forces have destroyed or looted millions of dollars of high-tech equipment, computers and computer hardware at Chernobyl as well as other nuclear power stations and research centers. At least 20 Ukrainian universities have been completely destroyed. To prevent the war sliding into total destruction of Ukraine’s higher education institutions and potential nuclear catastrophe, the Biden administration did not cut all scientific ties with Russia. This policy was formulated by Office of Science and Technology Policy which advises President Obama on matters related to science and tech. According to a government official, the gap of four months between invasion and announcement of policy was probably due to the U.S.’s scientific enterprise and “decentralized research community” in America.

Culturally, the science community has always been more immune from international schisms that characterize many other fields of work. For many scientists, there’s resistance to having to cut off access and partnerships with groups because of a war. One of CERN’s mottos, for example, is “science for peace.”

“There’s ample evidence that many Russian scientists want no part of Putin’s war. The official stated that we want to make sure these individuals are able to either engage with us, or to leave Russia.

“Many of the people that we talk with know each other, or work with each other in one form or another for years or decades. They are friends.”

“Within the scientific community there are mixed feelings and a variety of views about what is the appropriate response,” Raymond Jeanloz, a professor of earth and planetary science at the University of California, Berkeley, told The Daily Beast. “Many of the people that we talk with know each other, or work with each other in one form or another for years or decades. Jeanloz and his wife are good friends. Jeanloz also chairs the Committee on International Security and Arms Control of the National Academy of Sciences. This private non-profit organization is primarily funded by federal grants. The OSTP is informed by its research.

A prevalent opinion is that it is not fair to judge individual scientists based on the actions of their government. Many thousand of Russian scientists signed an open letter condemning the invasion shortly after its occurrence.

And in September, the election for leadership of the Russian Academy of Sciences showed evidence of state meddling: The incumbent president withdrew his candidacy the day before the election, in what he called a “forced decision.” Gennady Krasnikov, the head of Mikron, Russia’s largest chipmaker, was elected instead.

The Biden administration imposed sanctions on Mikron back in April, in a broad panel of sanctions against the aerospace, marine and electronics sectors in Russia. Another round of sanctions in August targeted the Skolkovo Institute of Science and Technology, or Skoltech, founded in 2011 as a partnership with the Massachusetts Institutes of Technology to build out a Russian version of Silicon Valley. MIT announced it was shutting down the $3 billion partnership back in February–the day after the invasion.

On Earth–and Above It

Climate change research is an area where Russia’s contributions will be difficult, if not impossible to replace. Russia is home to the vast majority permafrost in the world, which can be used by scientists to determine the pace of global warming. Russia is currently the Arctic Council’s chair. This group of eight countries promotes international cooperation in climate change research. International teams of scientists drill boreholes into the ground to collect samples of permafrost at dozens of Russian research stations.

Soon after the invasion started, the seven other members of the Arctic Council, which includes the U.S., halted their participation in the council. Since then, they have resumed their research without Russia. Some of the research has been transferred to Canada and Greenland, which are home to permafrost reserves of their own. However, this still shows an incomplete picture and does not reflect the actual permafrost situation in Russia. This is a problem because one degree of change could completely alter the model.

“It’s the difference between ice and water,” said Brendan Kelly, a professor of marine biology at the University of Alaska, Fairbanks and a member of the International Arctic Research Center. It is an important detriment to not be able [Russia] in the discussion. It will be a big loss to us as we are trying to understand on a pan-Arctic scale what is happening in the Arctic.”

“Not being able to involve [Russia] is a significant detriment. It will be a big loss to us as we are trying to understand on a pan-Arctic scale what is happening in the Arctic.”

Russians have been massive contributors to climate knowledge, Kelly said. But at the same time, they “haven’t been the best team player in terms of data sharing. ” That has been an issue going back decades, according to Kelly.

In other areas of science, a clean breakup is near-impossible. Perhaps the quintessential example is the International Space Station–a collaboration between the U.S., Russia, Japan, Canada and the European Space Agency, the first piece of which launched in 1998. The ISS literally cannot operate without both Russia and the U.S., which supply propulsion and power, respectively. Scientists on the station conduct experiments primarily to see how things function in microgravity, to prepare for long-term space flight. For decades, it has been lauded as an example of international cooperation, between parties that don’t always share the same goals in other areas of geopolitics. The astronauts aboard the ISS have always had to be protected from any deterioration in relations with other countries because of their space programs.

But that insulation has eroded as the invasion has progressed. Russian cosmonauts aboard the ISS staged a photo in July in which they raised anti-Ukranian and Russian flags. This episode provoked “strong rebuke” from NASA. That month Russia announced that it planned to withdraw from the ISS in order to focus on building its own structure, but later walked that back and confirmed its participation until 2028 (a few years before the station’s formal shutdown in 2031. )

And in September, NASA and Roscosmos, the Russian Space Agency, collaborated to send astronaut Frank Rubio and two cosmonauts to ISS on the Soyuz MS-22 spacecraft, launched from Kazakhstan.

Ultimately, there is no easy action that can satisfy all parties involved. Kelly said that war was “clearly obscene”. “It’s a devastating humanitarian crisis. But we also have a crisis with the climate, and not being able to advance our understanding of where the climate is headed is going to cost human lives and human wellbeing in the long run. It’s not easy to split the baby. It’s not an easy call.”

As of now, the total destruction in Ukraine is vast. Nearly 7,000 Ukrainian civilians have died since the start of the war, according to the U.N. And Ukraine’s scientific infrastructure and nuclear power plants continue to be under threat from Russian forces.

“I don’t know how to divide the baby here. It’s not an easy call.”

While many American scientists are hoping the conflict ends soon and they can return to somewhat normalized relations with their Russian counterparts, others consider the war to be an inflection point that could–and should–encourage the West to rethink its scientific partnerships across the board.

Some even think Ukraine itself could help fill the void left behind by Russia. To that end, the NAS has set up a sort of exchange program setting up displaced Ukrainian scientists with positions in Western universities and research institutions.

“Ukraine needs its researchers in order to rebuild. Russia has experienced significantly less damage from this war,” McNutt said. We’re not talking about needing to rebuild Russia.”

The post Russia’s Invasion of Ukraine Has Forever Changed How the World Does Science appeared first on The Daily Beast.