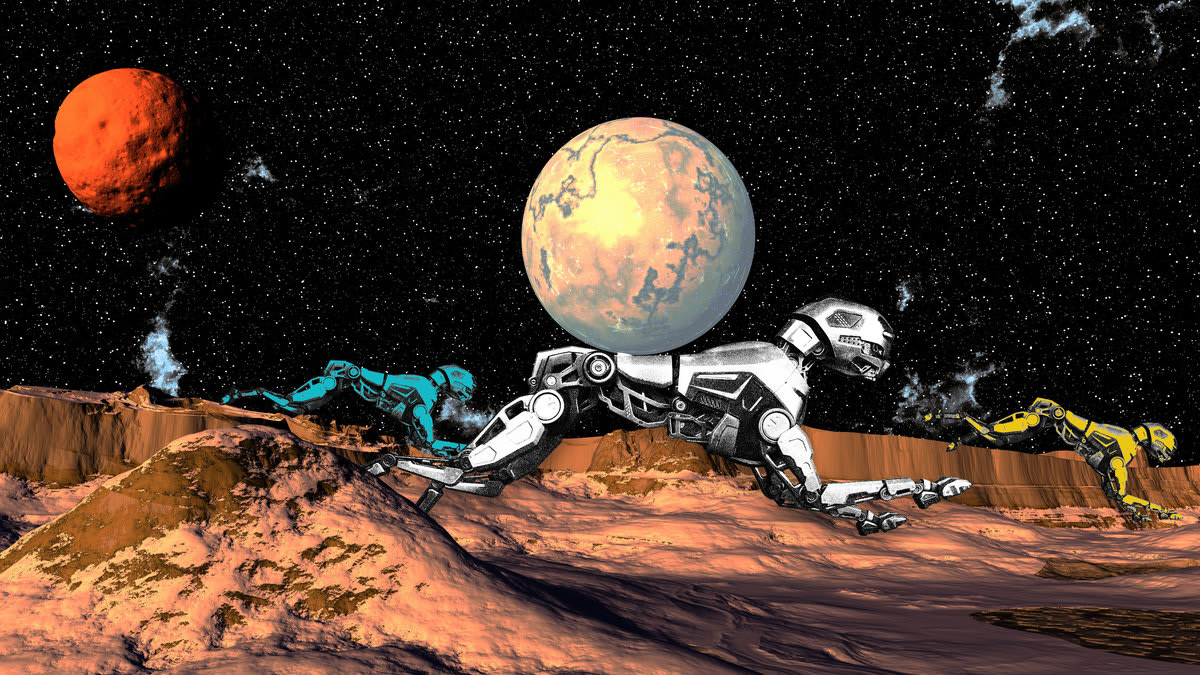 It’s the year 2035. You wake up and press a button that opens up the blinds for your bedroom window revealing a spectacular view of Earth. As you begin your day on the lunar surface, it’s yet another morning on the moon. As you get out of bed, though, you hear it: the familiar whirring sounds of actuators and the tip tap of feet as your robot dog makes its way towards you. Before you and the dog start exploring the moon, pet them.

This might seem like a fever dream brought on by a few too many episodes of “The Jetsons”–but it could actually become a reality in the future. In fact, two teams are currently in a heated competition to develop a working prototype lunar rover that resembles a robot dog.

Researchers at the Swiss Federal Institute of Technology in Zurich (ETH Zurich) and the Research Center for Information Technology in Karlsruhe, Germany (FZI) both entered robot dog designs in the ESA’s lunar polar challenge, a competition for European and Canadian engineering teams to develop moon rovers capable of scouting and prospecting valuable resources such as ice in harsh and inhospitable areas of the moon like the south lunar pole.

Five out of an initial 13 teams succeeded in the first challenge of navigating and mapping a simulated lunar environment, allowing them to proceed to the next phase of the competition. The winner will receive a hefty money prize along with resources to potentially see their rover design reach the moon.

ETH Zurich’s robo-dog is dubbed the Geological Lunar In-Situ Mapper and Prospector for Surface Exploration (GLIMPSE). It boasts its ability to move semi-autonomously on the lunar surface. The dog is equipped with sensors which allow it recognize different minerals and distinguish them.

“Walking machines provide advantages over wheel-based systems when it comes to rocky terrain, steep slopes, or a combination of both,” Hendrik Kolvenbach, an engineer at the Robotic Systems Lab at ETH Zurich and scientific director of the GLIMPSE project, told The Daily Beast in an email. “[Our university is] one of the pioneers in legged locomotion and we ultimately want to work towards a system that can be deployed in space to enable scientific discovery in areas where wheeled rovers are not able to go.”

The goal of the competition is to create a rover capable of exploring the south lunar pole, a region of the moon that’s believed to be rich in potentially valuable resources for future colonies such as ice to be used for water. Kolvenbach said that GLIMPSE is designed to “provide a 3D map and identify and measure resources” in the lunar surface terrain that was simulated by the ESA as a part of the competition.

The semi-autonomous robot from ETH Zurich can also navigate the lunar surface based upon waypoints given by operators on terra firmea. This is helpful because the communication delay between Earth and the moon lasts a few seconds, which hinders real time remote controls. It’s also handy as the robo-dog explores the uncharted terrain of the lunar pole in search of water ice–widely considered to be a “holy grail” resource on the moon to many, including field robotics expert and pioneer William “Red” Whittaker.

The robotic explorer GLIMPSE, created at ETH Zurich and the University of Zurich, has made it into the final round of a competition for prospecting resources in space.

While he’s uninvolved with the ESA competition, he is a part of two Carnegie Mellon University efforts to put rovers on the moon in order to explore the south pole: the Iris lunar rover, and the MoonRanger. Whittaker explained to The Daily Beast that the area is rich in ice and could make it a good place for mining the resource to supply moon colonies with water, food, and fuel for space travel. That’s why it’s so important that we begin exploring the area now before we begin colonization efforts.

Whittaker said that he doesn’t doubt the skills of the ETH Zurich’s team to build a good robot, but he is slightly skeptical about the robo-dog design for the purpose of exploring the moon. That’s partly due to where the ESA challenge took place: a former aircraft hanger with scattered boulders and rocks to ostensibly simulate the moon’s environment. Whittaker believes that this location provides a poor simulation of the lunar surface.

“[The course] represents an artificial lunar landscape that’s unrealistic,” Whittaker told The Daily Beast. “If you look at the lunar robot relative to the size of the rocks the competition is putting in front of them, it’s not at all the same rock distribution on the moon or Mars.”

Whittaker added that while GLIMPSE’s quadrupedal design might be useful moving through a rocky terrain like the one in the ESA challenge, the reality is a dog-like bot will face a much more different environment on the moon where the soil is known to be much loamier and stickier rather than rocky. He said that he would never have seen a moon like it if he had looked at its surface.

Walking and driving rovers from FZI.

He’s also suspicious about the efficacy of the quadrupedal design while moving through lunar soil. If it’s not designed correctly, it can easily get stuck in the terrain. Whittaker says that lunar rovers have been designed to be low in ground pressure. He admits, however that “moon’s gravity can sometimes be very forgiving in this regard.”

Moreover, the team believes that its AI and semi-autonomous features make it possible to have “packs” of multiple robot dogs on the lunar surface in order to better coordinate efforts to survey the moon. This is something they hope to try out in the next round of the ESA challenge as they’ll have the chance to have “a team of several robots do the exploration,” according to Kolvenbach.

“A teamed approach increases the amount of data we can create in the short timeframe but also provides redundancy,” he said. “In case a system fails, we have some backup options.”

So yes, you read that right. There’s a real possibility that future moon colonies could have roving packs of robot dogs.

Of course, this possibility is still far away. The team is working on optimizing and tightening up GLIMPSE’s design before the final round taking place later this year. If they win, there could be a chance we’ll see ETH Zurich’s robo-dog on the moon “sometime in the next decade,” according to a press release from the university. So while there’s some skepticism from robotics experts about the rovers, maybe one day, we’ll have robo-dogs on the moon to help its human companions fetch valuable resources–along with the occasional stick or tennis ball.

The post Roving Packs of Robot Dogs Are Coming to the Moon appeared first on The Daily Beast.