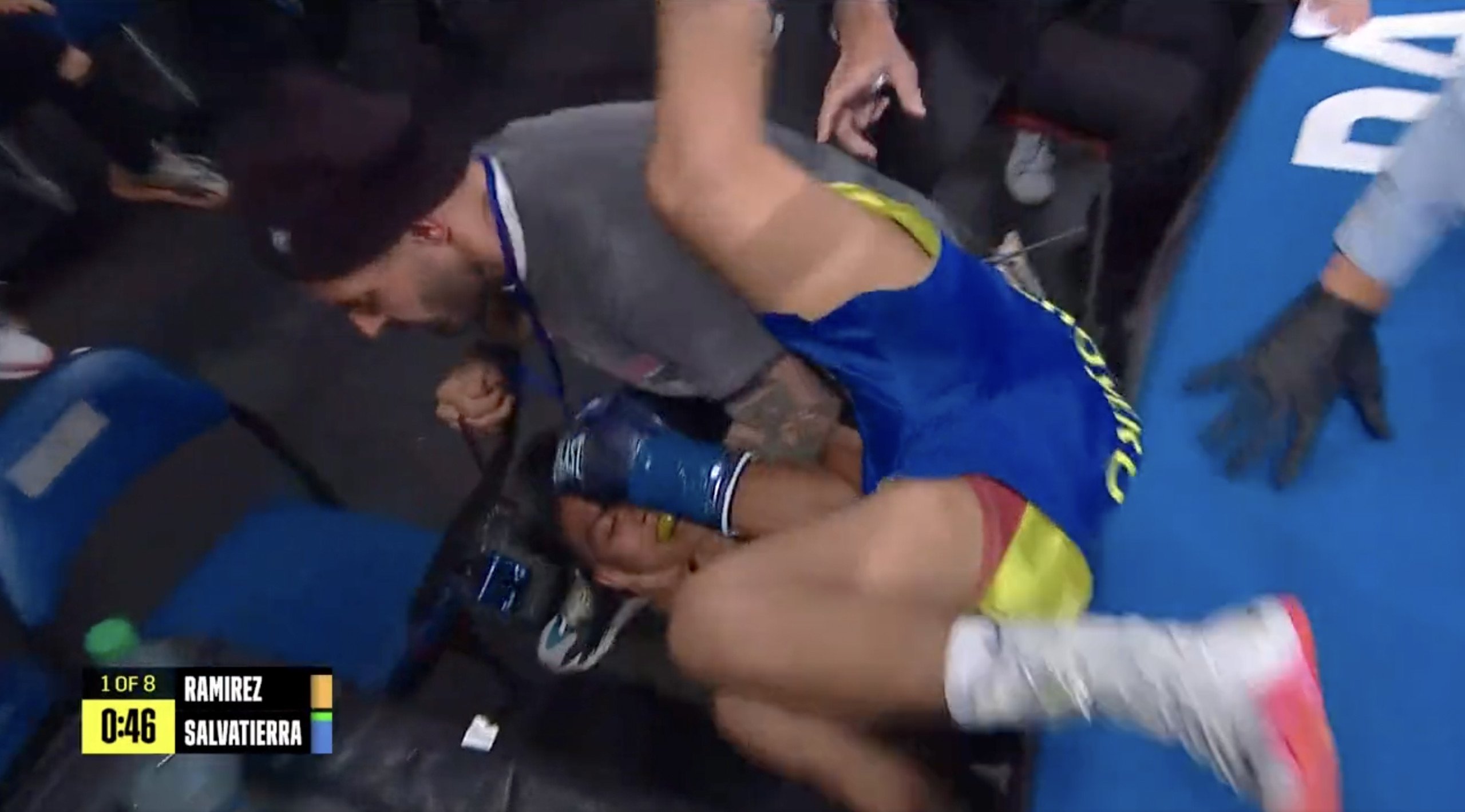 A ringside photographer saved a boxer from a serious injury after he was sent crashing through the ropes and out of the ring following a brutal knockout.

The incident happened during John ‘Scrappy’ Ramirez and Jan Salvatierra’s super flyweight bout in California’s Toyota Arena, at a Golden Boy Promotions boxing show broadcast on DAZN on Saturday, May 14.

Undefeated Ramirez scored a knockout against Salvatierra in the closing minutes of round one.

Luckily, a quick-thinking photographer reacted and caught the back of Salvatierra’s head, preventing the boxer from hitting the hard floor as he crashed backward out of the ring.

The heroic photographer stopped filming the fight and can be seen helping the fighter to stop falling on the ground.

Despite Salvatierra’s unfortunate fall, the referee starts to remove him and an unidentified photographer assists in rolling the Mexican fighter into the ring. When he arrives, the referee Ivan Guillermo takes one look at Salvatierra, who appears concussed, and calls time on the match.

Ramirez was awarded the win, but things could have been much worse for Salvatierra had the ringside photographer not caught the fighter.

Ramirez was fighting on Saturday to keep his undefeated streak. He has recorded nine victories (eight knockouts) since making his professional bow. The hit on Salvatierra is now being considered by many as the “knockout of the year.”

Boxing fans took to Twitter to praise the photographer for saving the boxer after one of the most epic knockouts of 2022 so far.

“Shout out to that cameraman outside of the ring for catching him and holding his neck to keep him from falling on his head. One spectator, @xWroth wrote “Wow!”

Shout out to that cameraman outside of the ring for catching him and holding his neck to keep him from falling on his head. Wow https://t.co/N0uNhXH8ak

“Great reflexes from the photographer. …” Another viewer commented

This isn’t the first instance of a photographer saving the day. Last year, drone photographer Matt Woods was hailed as a hero for spotting and saving a man being attacked by a shark on Bondi Beach

In 2017, photojournalist Austin Raishbrook pulled a man out of his burning SUV, ultimately saving his life.