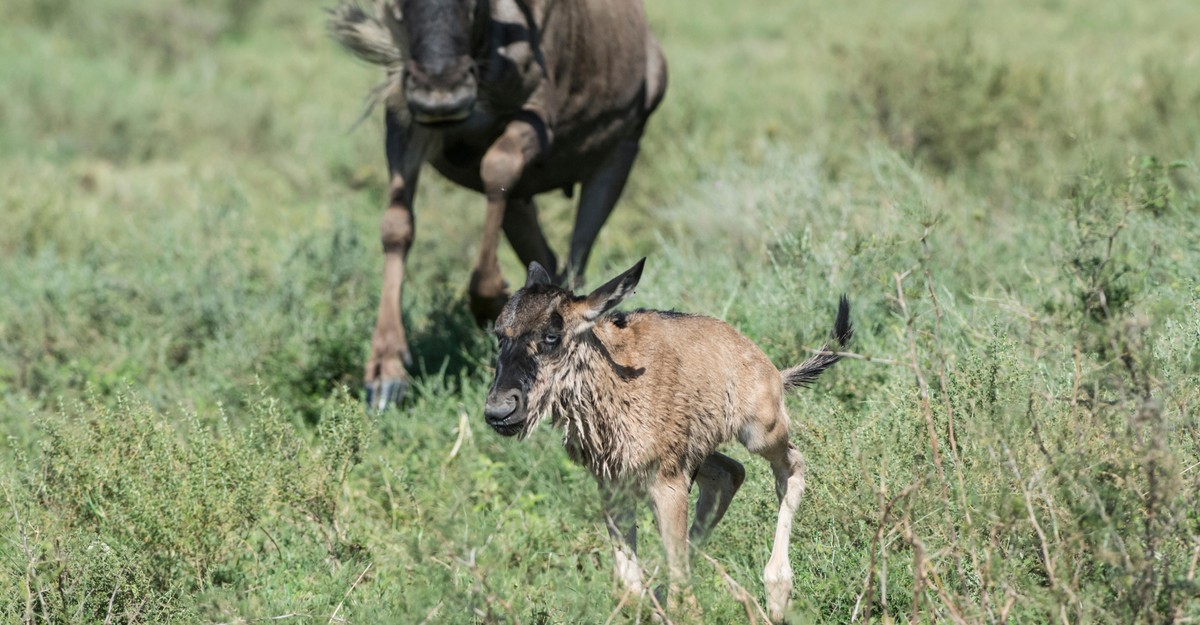 Evolutionarily speaking, every human is a bit of a preemie. The nine months most babies spend in the womb are enough for them to be born with open eyes, functional ears, and a few useful reflexes–but not the ability to stand, sprint, climb, or grasp onto their parents’ limbs. Our offspring, unlike other primates are sluggish and inept. They’d likely be beaten up by infant gorillas, tiny and eventiny tiny tarsiers , which have more developed brains. Think of it this way: Researchers have estimated that, for a newborn human to be birthed with a brain as well developed as that of a newborn chimp, they would have to gestate for at least an extra seven months–at which point they might run 27 inches from head to toe, and weigh a good 17 or 18 pounds, more than the heftiest bowling ball on the rack.

The technical jargon that scientists use for underdone newborns like ours is altricial, though when experts are on the phone with journalists, they’re sometimes more apt to toss around words like useless or pathetic. Jared Stabach is a Smithsonian research ecologist. He says, “It’s almost embarrassing to how helpless, when we compare ourselves with the wild world.” “It makes me wonder how we got to 7 to 8 billion people on this planet.”

Among animals, humans aren’t alone in emerging in such a state. Most songbirds are altricial, hatching in large clutches of chicks that come out pink, naked, blind, and struggling to keep warm, making them super dependent on their parents; much of the same is true for bears such as pandas, which deliver young that are just one-900th of the mother’s size and can’t pee without outside help. The pressures wild animals face–intense predation, food scarcity, environmental stress–can sometimes push certain species to emerge from eggs or wombs earlier. But experts don’t fully understand the reason people are born so vulnerable. One hypothesis, called the “obstetric dilemma,” holds that human hips, which shrank and slimmed as our species evolved to walk upright, are now too narrow to accommodate baby heads of any larger size. Another posits that birth is the termination of an unsustainable lease: Human parents may evict their fetal tenant around nine months to unburden themselves of its thirst for nutrients, or perhaps the baby gladly vacates the premises, having hit the point of diminishing returns.

However you look at it, pregnancy is marked by intergenerational strife, if not an all-out war between an offspring and its parent. Birth, then, in addition to welcoming new life, can bring about an end to the harshest hostilities–and its timing partly reflects the terms of a tightly negotiated truce. This idea may not be compatible with the widespread conception of pregnancy being “this joyful, wonderful, great moment with the fetus working towards the same interests,” Jessica Ayers from Boise State University explained to me. The goals of child and parent, however, don’t always align, even when one is growing inside the other. Fetuses may maximize their chances of surviving after birth by extracting as many resources from their parent as they can. Their tool for mooching is the placenta–technically, the very first organ that any human produces, Ayers said–which allows a fetus to access its mother’s blood vessels and siphon out nutrients. Ayers explained to me that the human placenta can embed itself in the uterine wall so strongly it may cause severe hemorhaging when the tissue begins to fall away.

For the mother’s well-being and her chance of having more children, her body needs to keep at least some nutrients. “So there’s a conflict over allocation,” says Ava Mainieri, an evolutionary biologist who studied maternal-fetal conflict at Harvard. In an attempt to conserve some of her reserves, the fetus attempts repeatedly to change its mother’s internal–her blood sugar, circulation and immune system.

Human mothers, then, may have forged a delicate detente with their offspring by delivering them in a feeble, naked, clingy state. This is not the only solution.

Plenty of other creatures give birth even sooner, yielding offspring in a more altricial state. Marsupials, in particular, take this strategy “to the extreme,” David Haig, an evolutionary biologist at Harvard, told me. For example, a red kangaroo will only gestate her foetus for four to five weeks, before placing a pink, unhaired, jelly-bean-sized joey in her pouch. It will stay there for eight months. Haig stated that the legs of little roos “aren’t even properly developed” when they are born. Roughly 100,000 times smaller than their mother, the joeys are basically a mouth with giant forepaws, built to crawl into the pouch, grab onto teats, and suckle–and do little else. “The rest of the body catches up later,” Haig said.

Lactation is a massive chore for moms, often requiring many more calories than even gestation does–and some animals are born so underdeveloped that they have to nurse for an exhaustingly long time. However, an early birth may be able to end some aspects of the maternal-fetal conflict. Offspring “have less negotiation power once they’re born,” Amy Boddy, a biologist and evolutionary theorist at UC Santa Barbara, told me. Pregnant animals can do only so much to prevent fetuses from taking nutrients. A new mother can, however, choose to stop feeding her newborn or to coddle it. Chicks, pups, and infants may beg, cry, or whine to extort food from their parents–but these efforts aren’t as direct as what occurs in utero. “The solution to being completely manipulated by the baby is, kind of, to give birth,” said Boddy, who has two children of her own. (In that way, birds have a good gig: They package all the nutrients that their developing offspring need into an egg, then shuttle out the whole shebang … though this does mean that certain species, such as the kiwi, must first haul around eggs that can take up 20 percent of the space in their body. )

Yet other animals have struck an armistice with compromises of a different kind. Their offspring are precocial, born so well formed that they’re able to leapfrog nearly all the feeble travails of infancy. That self-sufficiency comes in handy for creatures that can’t afford to dote on their infants for long, or that are constantly on the move, like antelope, cattle, and horses. But it exacts a parental tax: The babies of precocial species tend to gestate longer–vacuuming up more of their parent’s internal stores–and emerge much larger. Boddy explained to me that he thinks it is frontloading rather than delaying the investment.

Wildebeest, one of the most precocial mammals known to scientists, must weather an eight- or nine-month pregnancy while migrating hundreds of miles across the savanna, often as they nurse an older calf–all before popping out a fresh kiddo that might weigh more than 40 pounds at birth, more than 15 percent of the mass of typical females. To carry such gargantuan offspring, an animal must be in tip-top shape–and constantly seek out resources to nourish her growing load. Still, the prenatal sacrifices really pay off: Just a few minutes after a wildebeest calf is born, even before the amniotic fluid on its flanks has dried, the animal is standing up and galloping around its parents; by the next day, it will be sprinting at almost full tilt, fast enough to keep up with the rest of the herd. It’s almost like giving birth to a “much more coordinated toddler” with the gams of a track-ready teen, says Anna Estes, a wildebeest expert at Carleton College,. All of that certainly behooves (sorry) the calves in question: “If they’re not moving, they’re dying,” Stabach, the Smithsonian ecologist, told me.

Some superprecocial mammals have developed ways to reduce the effects of prolonged, heavy pregnancy. The placentas of wildebeest and other hoofed creatures, Haig told me, aren’t as invasive as the ones that human fetuses produce–which makes birthing long-gestating, big-bodied calves less risky. When the little ones are delivered, “the placenta comes away very cleanly,” Haig said. Just as her newborn does, “the mother can also get up and walk off very quickly.”

That’s certainly not the tack that humans take. Our “childhood” tends to last for almost two decades in many parts of the world–far longer than the measly stretch a fetus spends camped out in the womb. Some parent-offspring conflicts may be stopped by giving birth. The peacetime is temporary. If generations remain so close, there will be more conflicts.

The post Pregnancy Is a War; Birth Is a Cease-Fire appeared first on The Atlantic.