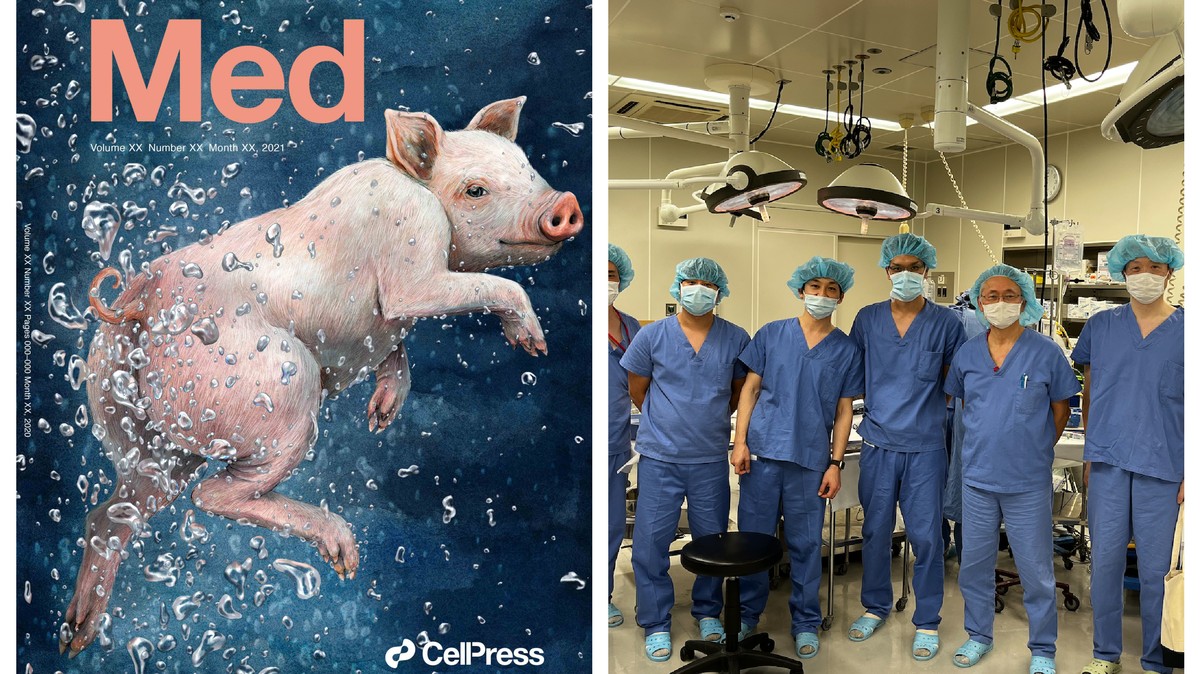 Pink, fleshy, and round, the anus has a lot in common with the mouth and is every bit as important.

But the similarities don’t just stop there. New research shows that animals can breathe through their buttholes.

A team of scholars in Japan has found that pigs can absorb oxygen through the anus, in studies exploring treatment for people with respiratory conditions.

By pumping oxygen and oxygenated liquid through animals’ buttholes into their intestines, the researchers found that they could survive without breathing through their lungs.

“It’s so impressive because we never thought of breathing from the gut, but it’s possible,” Takanori Takebe, an author of the study and a doctor at the Tokyo Medical and Dental University, told VICE World News.

Last Year, Takebe’s team published their research on mice with collaborators from Nagoya University Graduate School as well as Kyodo University Department of Respiratory Surgery. Now they’re looking to submit their research on pigs, which are closer to humans in physiology and genetic makeup, to a U.S. medical journal in August.

The scientists were inspired to explore the unconventional breathing method by loaches, a freshwater fish that can use its intestines to breathe. They found that in extensive hypoxic conditions–when there isn’t enough oxygen available at the tissue level–the structure of loaches’ gut tissues changed to allow for easier breathing.

In order to see if mammals would also breathe through their anus in oxygen-deprived conditions, Takebe first tested mice. He described the findings as “stunning” and published them in Med.

“I’m always very skeptical about the results, but it turns out every time we do the tests, we can get reproducible datasets,” said Takebe, who practices medicine also at the Cincinnati Children’s Hospital Medical Center.

The study has implications for treating patients who suffer respiratory failure.

Normally when a patient needs oxygen, doctors opt for mechanical ventilation, in which a machine pushes air into the lungs through the windpipe. Extracorporeal membrane oxygenation is another option. This involves the blood being pumped from the body and then reoxygenated by a machine. However, this process is susceptible to bleeding or blood clots. And as many emergency rooms saw during the early stages of the COVID-19 pandemic, it’s not always possible to get your hands on a ventilator.

With this in mind, Takebe thought, why not try the backdoor?

To test mammals Takebe and co-authors first put oxygen gas in the anuses oxygen-deprived mice. They found that mice that received the treatment lived longer than the ones that didn’t.

They then went one more step and removed any barriers that might prevent oxygen from reaching the stomach. They scraped the mice’s mucosa, the innermost layer of the gastrointestinal tract, and injected the gaseous oxygen into the animals. This helped rodents live longer. What’s more, unlike untreated animals, the mice with their mucosa removed stopped gasping for air altogether and showed no signs of cardiac arrest.

But given mucosal removal might be uncomfortable for patients, the researchers tried a different approach–delivering oxygen in liquid form.

They added oxygen to perfluorodecalin, a chemical that can dissolve large amounts of oxygen. In the past, the substance has been used to treat infants with severe respiratory distress and as artificial blood to improve tissue oxygenation. After shooting the liquid up the mice’s rectums, the scientists found oxygen levels were further improved. The same was true when they tested pigs and rats.

“In a 50-kilogram pig, when we provide this size of liquid oxygen to the butt, they can survive 30 minutes even when experiencing lethal respiratory failure conditions,” Takebe said.

Caleb Kelly, a gastroenterology fellow at Yale University who’s not affiliated with the study, described the scientists’ newfound method as “promising.”

“The pandemic has highlighted the need to expand options for ventilation and oxygenation in critical illness, and this niche will persist even as the pandemic subsides,” he wrote in a commentary accompanying the 2021 study.

Takebe plans to start human clinical trials as early as this year to prove its real-life efficacy.

Similar to how automated external defibrillators–portable medical devices used to help those experiencing sudden cardiac arrest–are placed throughout public spaces like buildings and schools, Takebe said a shot of liquid oxygen could be made available to save those suffering sudden respiratory failure. Takebe confirmed the safety of the method in hospital by testing it with healthy volunteers. He said that he would soon be recruiting patients suffering from respiratory problems to test his conclusions.

The post Pigs Can Breathe Through Their Buttholes and So Could You, Scientists Say appeared first on VICE.