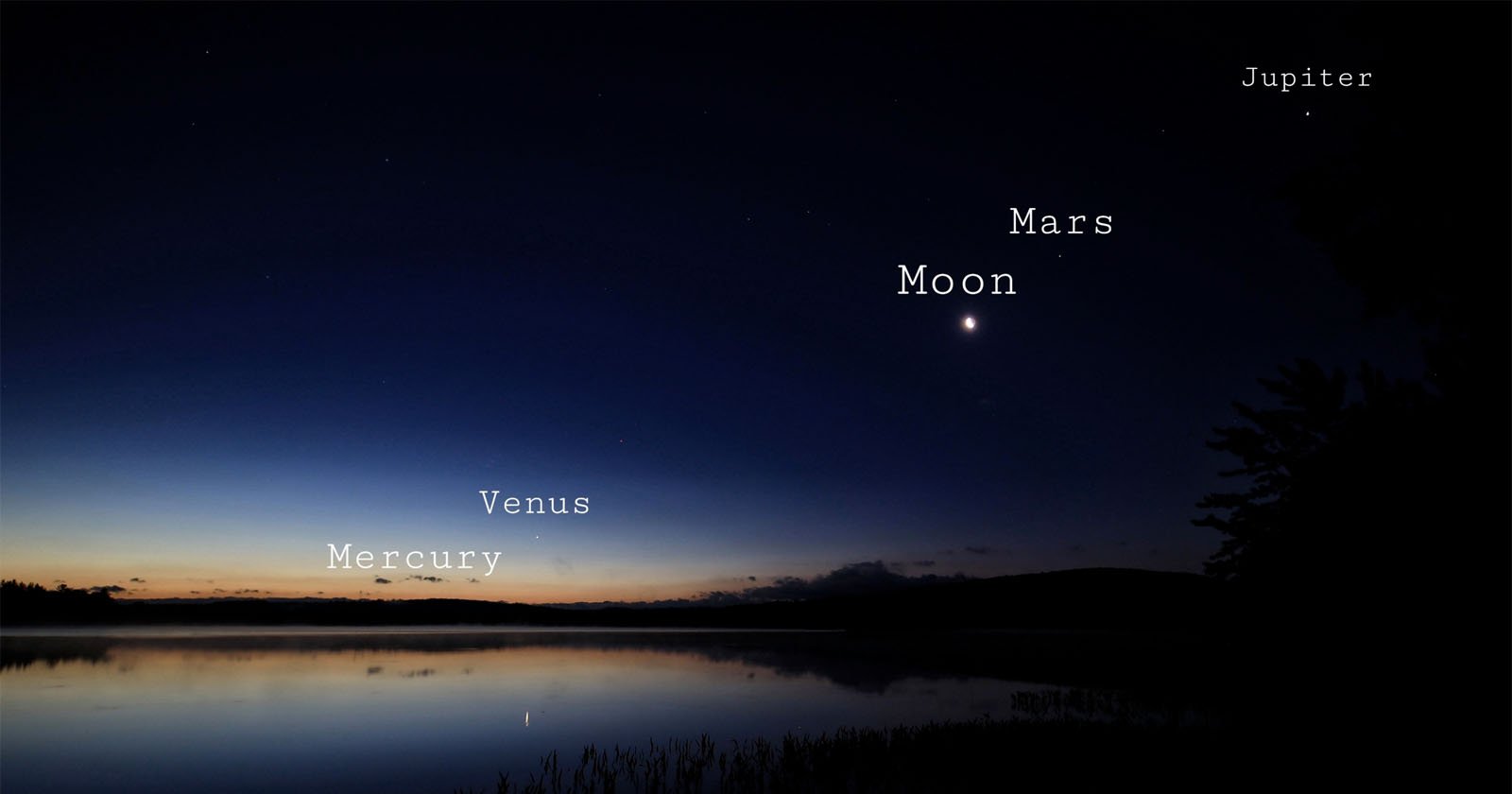 The last few days have seen a parade of planets lined up in the night sky with Mercury, Venus, Saturn, Mars, Jupiter, and the moon all visible — a planetary alignment that won’t happen again until 2040.

Below are some of the best photos that PetaPixel has spotted of the rare celestial event.

Ryan Knapp captured a stunning image of Mercury and Venus from close to Berlin, New Hampshire. Knapp used a 15mm lens attached to his Canon R for a two-second exposure at f/2. 8 at ISO 250.

“Mercury was the hardest to photograph as it was not only marred by haze and low clouds that were along the horizon, but it quickly became drowned out by the predawn light along the horizon. So, the opportunity to get it and all the others wound up being small,” Knapp tells PetaPixel.

Knapp shared a second image on Twitter this time with Venus, the moon, Mars, Jupiter, Saturn.

Friday’s view of the Moon was impossible due to inclement weather. Because I knew that it would be, I took a couple of photos the night before. Although I managed Mercury in another photo, this was my favorite. pic.twitter.com/spKe5HUcC8

“I used a 15mm lens on my Canon R and was able to get four out of the five planets together in one shot. I had to take two separate shots to get all of them and when I stitch them together, they all just fade into the background since the image becomes so large and wide.”

Astrophotographer David Jenkins captured a crescent moon along with Jupiter, Mars, Venus, and Mercury from the Australian capital Craberra.

Guillermo Valdes snapped Mercury, Venus, the moon, Mars, and Jupiter from Coahuila de Zaragoza, Mexico using a Google Pixel 3 XL smartphone on a tripod. Valdes picked up a “false blue moon,” which is a reflection of the bright moon in the lens.

Space shared a brilliant image taken by astrophotographer Wright Dobbs of all five planets plus the moon from St. Cloud in Florida.

See the rare alignment of 5 planets and the moon in this stunning night sky photo https://t.co/e6TtkR7EAn pic.twitter.com/OpgPNKm019

“Seeing the night sky is amazing and, knowing the rarity of these alignments, you have to take every opportunity to view and capture it,” Dobbs tells Space.

LOOK: In case you missed the five-planetary alignment earlier today, here’s a glimpse of the rare phenomenon in this photo captured by photographer John Reco Estrera.

CDN Digital tweeted out this beautiful image taken by John Reco Esterea from Daanbantayaan in the Philippines of Mercury, Venus, the moon, Mars, and Jupiter.

“Unfortunately, Saturn didn’t fit into the frame due to lack of focal length but it can still be seen with the naked eye,” he tells CDN Digital.

Markus utilized his Samsung S22 smartphone Ultra in night mode to capture this spectacular image of Mercury, Venus, the moon, Mars, and Jupiter in Cubao, Quezon City also in the Philippines.

Photographing five small specs of light in the night’s sky is not the easiest task to pull off, especially when they’re far apart from one another.

@hannahkayeh Incase you missed the 5 planets aligned, we woke up at 4:30 am so you could see this! It wont happen again until 2040#planetsaligned #fyp #moon #5planets #foryou Running Up That Hill (A Deal With God) – Kate Bush

The above TikTok video taken by Hannah Kaye from Denver, Colorado, shows the distance between Mercury and Saturn and is a great example of how it’s virtually impossible to get all five plants in one frame.

As mentioned, this alignment is incredibly rare and photographers won’t get another chance to capture it for nearly 20 years.