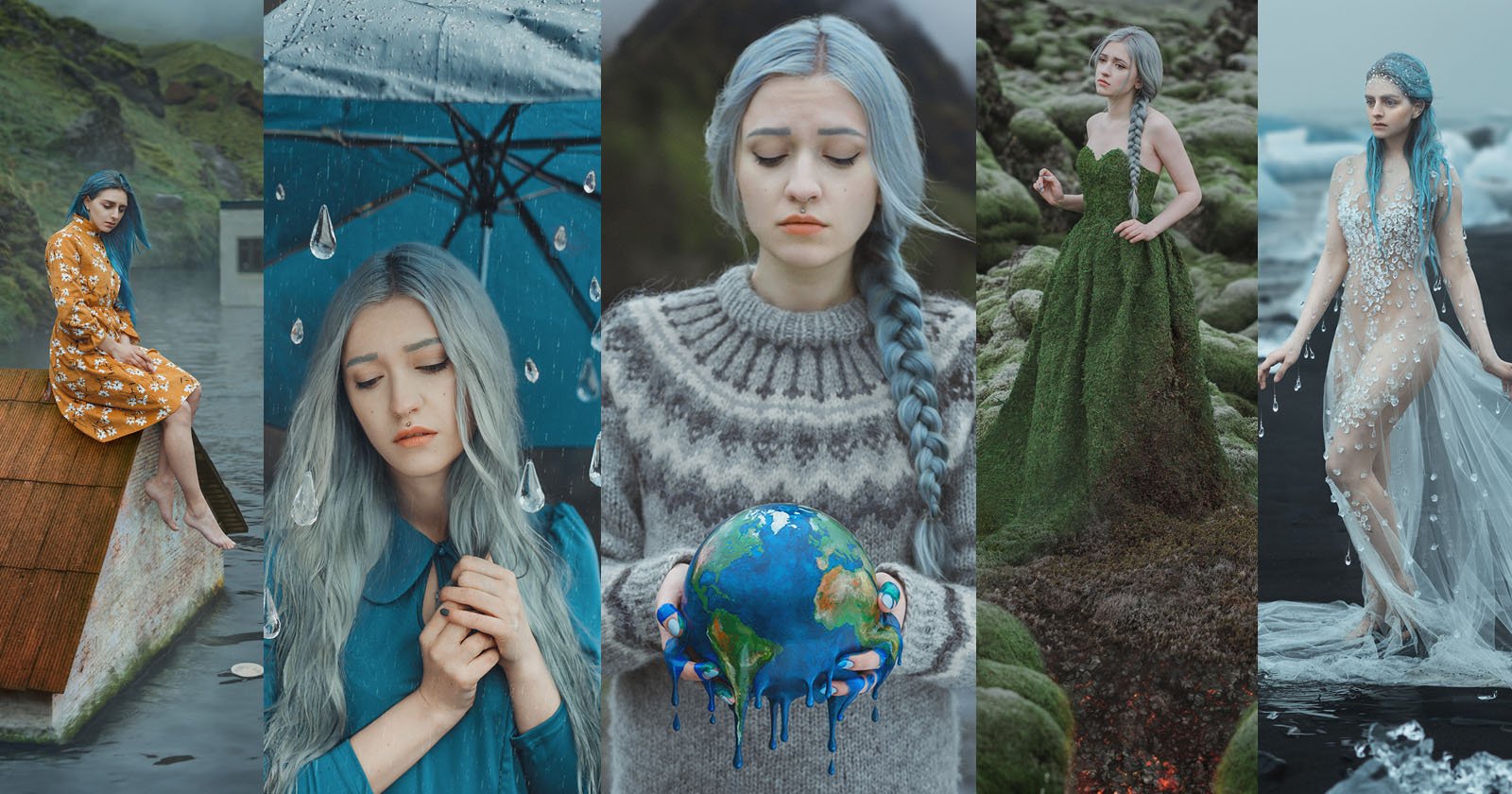 Photographer Anya Anti has created 2. 5 Seconds, a climate change awareness project that she hopes will start a conversation about the issue and educate more people about the facts, the urgency of the crisis, and the seriousness of its consequences.

“I always cared about the environment and loved nature,” Anti tells PetaPixel. I don’t think it is enough for me to take the necessary steps and make a change in my life.

“The turning point was when I visited Iceland first in 2016. Although I have been to many other places, none could match what I experienced and witnessed in Iceland. This trip had a profound impact on me. It made me aware that the beauty of our planet may soon disappear.

“The thought that nature is being affected and destroyed by the changing climate became personal, shocking, and upsetting,” the photographer says. The photographer says, “I was determined to preserve Iceland’s amazing beauty and capture it through my art as soon as I could.”

I’m realizing it’s time for me to add more meaning to my photography, to use it to share how I feel, my fears, and to create a powerful message .”

Half of the images in the project were self-portraits. Anti does this often with the remote control and a tripod. But sometimes, it helps to be behind the camera and have more control over the process. That’s when her model was beneficial, and she believes the team effort of four members was advantageous to the project.

The shoot was done in Iceland, but the post-processing was back in New York, so Anti had to visualize the final results while looking through the viewfinder or even without it for self-portraits. Anti would create mood boards and sketches as well as research the area. The result may vary, but the final artwork usually comes very close to what she imagined when she does all those things.

What Does the Title 2. 5 Seconds Mean?

“Planet Earth is 4. 5 billion years old. Humankind is about 140,000 years old. If we compress the Earth’s existence into a normal full day of 24 hours, then we’ve been on this planet for 2. 5 seconds,” explains Anti, the Ukraine-born artist. “I used 2. 5 Seconds as a title because I wanted to invoke the power of numbers and perspective to create a strong and shocking effect.

“In 2. 5 seconds, we’ve become the dominant species with a rapidly growing population, causing a catastrophic environmental impact. The industrial revolution was created and fossil fuels have been burned, releasing more carbon into the atmosphere than any other time.

“We have caused global warming at a record pace, endangering our own existence. We have cut trees, destroyed forests more than ever, and polluted air, water, and soil. In the middle of ocean, we have made an island of trash the same size as Texas.

“Three-quarters of Earth’s land surface is under pressure from human activity. In just 2. 5 seconds, we’ve turned the planet into our own personal factory.

“It took almost 4. 5 billion years of evolution for us to exist, and we have changed so much in so little time. We are the problem. And it is up to us if we want to make it to 3 seconds.”

How the Project Started

The Iceland visit in 2016 opened her eyes and changed the way she felt about climate change. Anti started thinking about the project in 2017, and it took three years to flesh out. Most of 2018 was spent developing concepts, trying to crowdfund the project, and finding sponsors. In 2019, she was finally able to go to Iceland for ten days with her team and shoot the whole project. In 2020, she sorted through the material, edited it, and finalized it.

Anti tried crowdfunding, but was unsuccessful and had to rescind all donations. She was eventually able to locate sponsors for the project and put some of her savings into it.

Two of the Most Challenging Photos

“The most challenging photo to shoot was Sea Level Rise,” says Anti. “I had no idea how it would come out until I returned to New York and started editing.

This time the photo editor couldn’t really rely on props and was unable to control the setting. Nonetheless, she still prepared. Initially, her model was sitting on a piece of white-bricked wall with an open swimming pool in the background.

“I couldn’t really build a setup and flood the area,” says the photographer. “So, my only hope was to use my editing skills and transform the white wall into the house, [with] a piece of spray-painted cardboard as the rooftop and use the pool as a base for the flooded area.

Anti wanted to create a costume that would look like melting ice with ice crystals and water drops and at the same time make it look like it’s not a piece of clothing but rather a part of an ice creature that represents glaciers.

“I created the costume and took a lot of time to make it,” Anti recalls. “I used tulle fabric that I roughly stitched together on the sides, nude sheer tights, acrylic crystals, and teardrop beads of different sizes that I hot glued and sewed directly to the fabric.

I wanted to give the illusion of my subject being naked, and that her skin is covered by crystals. Transparent nude-colored, transparent tulle was used.

The photoshoot was very challenging. The concept was to be photographed next to the glacier. We had to photograph under the freezing wind and rain. My model was half-naked, wearing a bodysuit and an ice costume. I had to be very quick and very efficient.”

“I love them all!” says the conceptual artist. “But if I had to choose [a favorite], I’d probably select Global Warming. This is a self-portrait in which I am holding a melting globe. This is a very personal image that symbolizes the entire project.

I commissioned someone to create it [hand painted desktop globe] in the US for me. Then I took it with me to Iceland in my luggage.”

One of her assistants applied paint on her fingers on location to create the effect of a melting planet with dripping paint. While editing, she figured it needed a more mountainous background with fog than the one it was shot on and swapped it for a different locale in Photoshop.

The Gear and Post-Processing

All shots were taken in natural light and sometimes with a silver reflector.

“I do RAW processing and most of the color correction and color grading in Lightroom,” says Anti. “Then I do compositing and retouching in Photoshop. [The photos] are not necessarily compositing heavy, but I always incorporate some level of it in my work. I’m also a perfectionist and give a lot of attention to the details.

“That’s why I spend some time cleaning things up with the clone stamp and healing brush, perfecting shapes with liquify, and making local color and contract adjustments with masks. In the end, I may apply some effects like extra color work, contrast, or textures like rain and snow.

Anti’s Beginnings as a Photographer

“I’ve always been a creative person,” says the environmental photographer. “As a child, I was good at painting and crafts. In 2010 I discovered photography and fell in love with it. With only $400 worth of savings, I bought my first DSLR camera [while in the university in Ukraine studying metallurgy, the field for which she received her diploma.]

“Unfortunately, I didn’t have an art background, access to professional education in my country, teaching experts or tutorials, mentors, or photographer friends. So, I had to learn everything by myself. Social media and online communities were the best places to gain all of my inspiration and knowledge. By trial and error and analyzing other photographers’ work, I learned and improved.

” When I started photography I was struggling to identify myself. Like many of us, I was trying different genres. One thing was clear: I wanted something different than everyone else.

“When I started shooting people, I wanted to do something beyond just simple portraits. It was important to convey a feeling, tell a story and make an image that is compelling.

” I began to experiment with lenses, shooting techniques and using props. Then, I used Photoshop to edit my photos and added special effects using compositing. A year later, I started creating fine art surrealistic female portraits, which became my preferable genre and a hallmark of my work.”

Her earlier project, Butterflies in My Stomach, was very personal and reflected her struggle with a dark period in her life. But with 2. 5 Seconds, she hopes to bring awareness about climate change, start a conversation about the issue, and educate more people about the facts, the urgency of the crisis, and the seriousness of its consequences.

“This 3-year-long experience taught me a lot,” admits Anti. “I learned about what I am capable of. I learned about people and relationships; I made new connections, did a lot of research, and made many lifestyle changes to live more sustainably.

“I’m a different person now. The final art and the way this project was done made me very proud. My only hope is for it to have at least a little impact or influence on how we treat the Earth.”