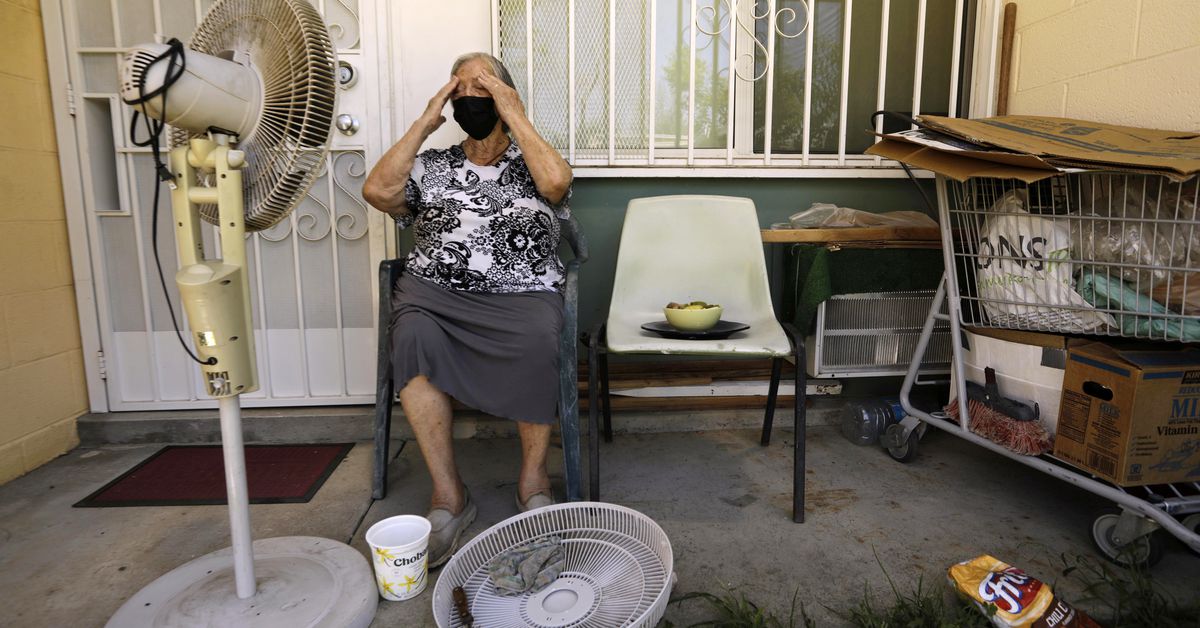 The human body can’t withstand extra-hot temperatures for very long. A healthy person can tolerate 95 degrees Fahrenheit of combined heat and humidity for a few hours, but prolonged exposure causes weakness, cramps, confusion, dizziness, and dehydration. The brain and other vital organs begin to swell after a while.

Nearly 100 million Americans faced these dangerous conditions over the past few weeks. However, very few people live where they can get cooling. Throughout most of the country, air conditioning is still treated as a luxury to be used for comfort, not as a public health necessity that saves lives. The US is doing better in terms of helping winter-weary people through it. Most states prohibit power cuts during winter freezes. Many states require heating in multi-family houses. However, cooling policies in summer are a patchwork of policy that allows the least vulnerable to slip through the cracks. While federal buildings and housing have heat standards, there is no guaranteed AC in them. According to the data collected by Energy Justice Lab at Indiana University, only eight states require utilities to keep their power on in heat waves. Vox shared this information with them.

“We understand the public health implications if a person has an apartment that’s too cold, especially for the elderly,” said energy economist Mark Wolfe, executive director of the National Energy Assistance Directors Association and the Energy Programs Consortium, an organization that assists low-income consumers. “We have rules that require that multifamily building owners must provide adequate heat. There’s no gray area.”

Reports are just starting to trickle in on how fatal the current heat wave is. Many of these deaths are entirely preventable. That’s especially true when heat-related deaths and illnesses happen inside the home, where we spend most of our time. Officials reported that many people who died in Oregon’s triple-digit heatwave last summer were found inside with no AC or fan. According to Arizona Department of Health Services numbers, roughly a third of heat-caused deaths happen inside the home.

Cooling policies have not caught up to a hotter planet

One thing we can count on: More heat are waves coming. The world has already warmed by 1. 1 degrees Celsius, a seemingly small shift in the climate that results in extreme heat becoming more common and more frequent. Around the world, there are more extreme hot days and less extreme cold days.

In the US, Climate Central identified 126 locations that now have an extra week of extremely hot days annually compared to 1970 (places like Phoenix and Austin are worst off, now seeing weeks above 100 degrees). And summer nights are warming nearly twice as fast as daytime temperatures, leaving people with no respite from the heat.

The health consequences of that 1-degree shift are showing up in mortality data: Arizona’s Maricopa County has reported a mid-season record of 222 suspected deaths from heat, 29 of them confirmed. At least 25 of these happened in the past week. These figures are in agreement with studies that have shown more heat-related deaths due to heat stress than previously thought. For every additional day of extreme heat per month, one investigation in the Journal of the American Medical Association found, there are 7 additional deaths per 10 million people. You don’t need to be in an extremely hot environment to risk. Historically cooler states face even greater challenges. Fewer residents have AC, and people are less acclimated to the heat. A 95-degree day in Washington state can be more deadly than the same temperature in Texas. Last summer, more than 500 people died in Oregon, Washington, Idaho, and Canada when temperatures shattered records in the triple digits.

The answer to hot weather is to get people out of the heat. This is especially important for those with lower tolerances, who are most at risk. This includes older adults, very young children, people with chronic conditions like high blood pressure, and people who are overweight.

But simply going indoors might not be any better. There are all sorts of reasons the home can become a death trap: People live in concrete houses that were built to withstand the cold, but lack AC or ventilation to keep cool. People may have AC, but they are afraid of turning it on as they cannot pay the bills. The AC unit may be damaged and not fixed by the landlord. Or the utility company shut off the power over a missed bill payment. The Census’s Pulse Survey, for example, has found that about one in every five households has been unable to pay a utility bill in the last 12 months.

Cooling tends to be overlooked at every level of government. The designated federal program to help low-income consumers, the Low Income Home Energy Assistance Program (LIHEAP), spends 85 percent of its funds on heating in winter, rather than cooling in summers, Wolfe explained. Biden last week announced $385 million in more funding for LIHEAP, but Wolfe estimated its needs for cooling to be about $3. 8 billion, equal to its heating budget. Even cities that have robust climate plans are slow to adapt. Chicago, for instance, only recently passed a requirement this summer for assisted living homes to provide AC. Some traditionally hot places have these protections in place, but not all. The problem with climate change is that it is blurring the boundaries between warm and cold climates.

There’s one policy the US can pass today that can also save lives: stopping utility shutoffs in the summertime because a customer has missed one or more payments.

Utility disconnections have been getting more attention. During the first year of the Covid-19 pandemic, some states prevented any utility disconnections for nonpayment. A Center for Biological Diversity report found that since the pandemic began in January 2020 through December 2021, households had their power shut off more than 3. 6 million times. Florida, Georgia, Indiana, Pennsylvania, and Illinois accounted for the most disconnections.

It is difficult to determine the size of those affected by cutoffs. While some utilities will voluntarily shut off power at certain temperatures above freezing, there are no reporting or oversight in most states. Researchers at Indiana University are trying to gather data in order to create a nationwide database which will address the problem. David Konisky from Indiana University is the co-director for the Energy Justice Lab. He estimates that the total number of people affected by this problem could be as high as tens to thousands each summer.

Arizona is one of the few states with a policy to protect its residents from utility disconnects in the heat. In 2018, 72-year-old Stephanie Pullman died after Arizona Public Service (APS) cut her power amid a 107-degree heat wave. Pullman fell short of her payment by about $50 that month. Her death didn’t become public until Phoenix New Times reporter Elizabeth Whitman published an article in 2019.

Pullman’s case built support for Arizona to finally ban these kinds of utility disconnections in the summer. In 2022, Arizona’s utility regulator made its temporary rules permanent for utilities like APS. The rule prevents some Arizona utilities from shutting off power in summer months or when temperatures pass 95 degrees.

Stacy Champion is a climate activist from Phoenix, Maricopa County who advocated for the new policy. He argues that the policy still has loopholes. It doesn’t apply to Salt River Project which is the second largest utility in the state. This is because the regulator does not regulate it. The state legislature could fix that with a law that governs all utilities. The rule sets a high threshold temperature that is only applicable to the summer months. This means heat waves in early season are not covered.

Setting the threshold for utilities at 95 degrees may not even be enough to protect the most vulnerable. Konisky, an Indiana University professor thinks that there is a greater chronic problem than the milder temperatures. “We tend to focus on [disconnections] during heat waves, or during cold spells, or during natural gas price spikes, but this is happening all the time,” he said. “It’s not just the very poor who get disconnected more frequently, but it’s people of color, people with young children, people with medical disabilities.”

One of the chronic underlying problems is racial discrimination. Just like utility disconnections data, this is difficult to show. In 2017, NAACP released a report on utility disconnection in colder months showing that they happened to African Americans at a higher rate than white people, regardless of income. In New York City, Black residents in New York City account for half of heat-related fatalities despite being 22 percent of the population. Access to air conditioning is a key factor, but so is the green spaces and tree cover that can make a neighborhood cooler.

Filling this policy gap on utility disconnections doesn’t have to be left to the states. “Congress could pass a law tomorrow that says utilities cannot disconnect anyone for nonpayment” at certain times of the year, Wolfe said. Whether it’s states or Congress that fills the gap, there isn’t any more time to waste.

“Twenty years ago, maybe once during the summer you’d have this very bad heat wave,” Wolfe said. “This summer it is just continuous. This is something our society has not prepared for. It isn’t possible with our programs. People aren’t ready for it.”

Millions turn to Vox to understand what’s happening in the news. The mission of Vox has never been more important than in the present: To empower by understanding. Our readers make a vital part in supporting our resource-intensive work. They also help keep our journalism free to all. Please consider making a contribution to Vox today.

The post People are dying from unpaid energy bills appeared first on Vox.