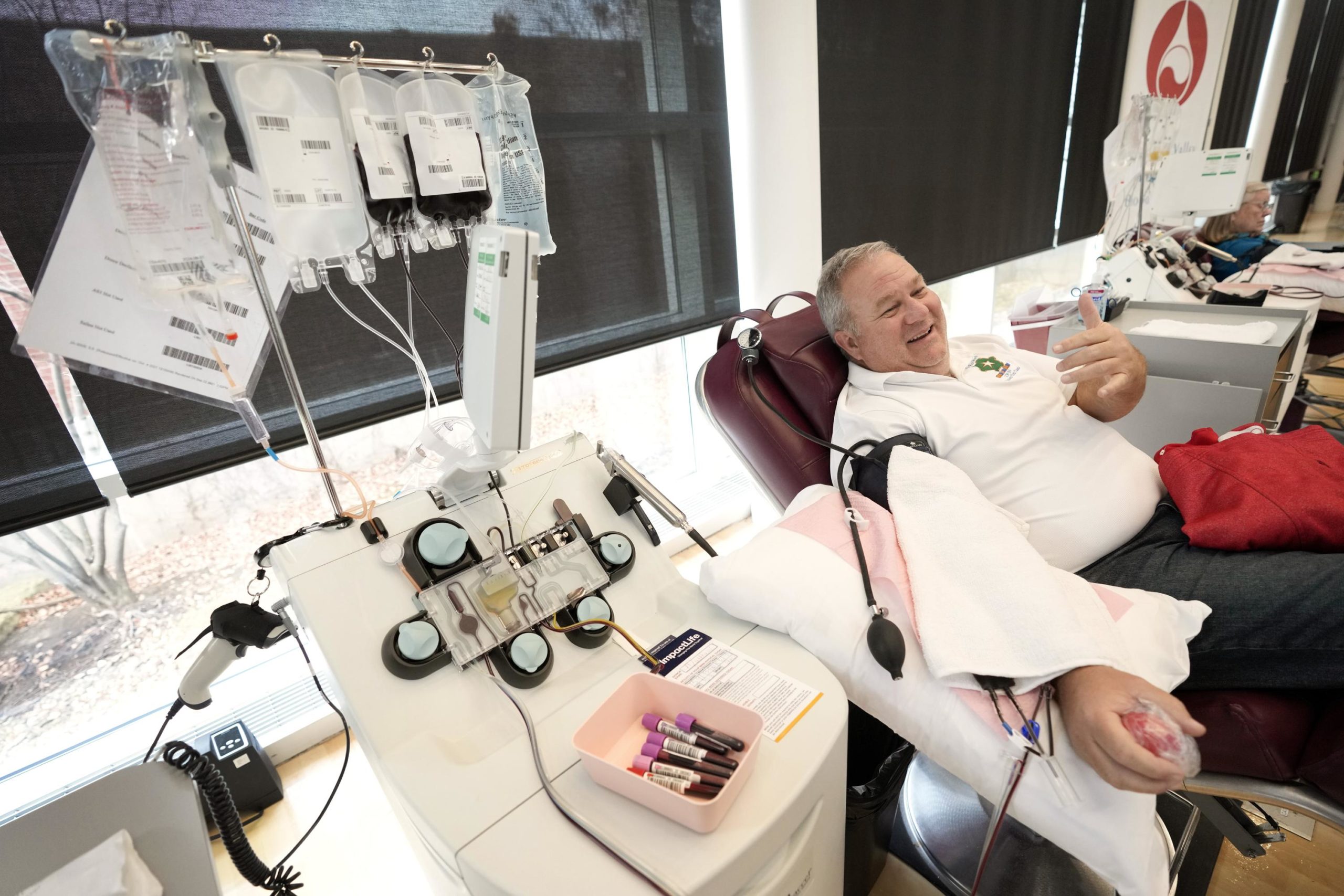 U.S. Army veteran Matt Schermerhorn couldn’t give blood for years because he was stationed in Europe during a deadly mad cow disease scare there. He’s now proud to sit back at the donor’s table.

Schermerhorn, 58, is among thousands of people, including current and former military members, who have returned to blood donation centers across the country after federal health officials lifted a ban that stood for more than two decades. It’s a duty. It’s a civic duty,” said Schermerhorn, who donated on Veterans Day at the ImpactLife center in Davenport, Iowa. “You really don’t have to go out of your way too much to help your fellow man.”

Blood collectors nationwide are tracking down people like Schermerhorn, U.S. citizens who lived, worked or vacationed in the United Kingdom, France, Ireland or served at military bases in Europe during various periods between 1980 and 2001, as well as anyone who received blood transfusions in those three countries anytime since 1980.

Since 1999,, those individuals have been forbidden from giving blood to the U.S. because they may be infected with mad cow disease. Outbreaks of the cattle-borne infection swept through Europe, eventually killing at least 232 people, mostly in the U.K. Four cases have been reported in the U.S., all in people who likely acquired the infections abroad, health officials said.

This rare condition is caused by an abnormal protein known as a “prion”, which causes brain damage and changes in the central nervous system. The disease can spread to others through contaminated meat, as well as from sick animals. Blood transfusions are also possible. After decades of investigation and review, the federal Food and Drug Administration determined that there is no risk to the disease. This was due in part to improvements in cattle raising and blood donation. The agency eased the restrictions over the past two years and fully lifted them in May.

That means hundreds of thousands of former donors can once again roll up their sleeves, perhaps bolstering U.S. blood collections, which lagged during the COVID-19 pandemic.

“The most important thing is for individuals that believe they may now be eligible to call their local blood center,” said Kate Fry, chief executive of America’s Blood Centers, which represents more than 600 blood collection sites providing nearly 60% of the U.S. blood supply.

The American Red Cross, which provides about 40% of the U.S. supply, last month began accepting donors previously deferred because of the risk of mad cow disease, formally known as variant Creutzfeldt-Jakob disease, or vCJD.

Invariably fatal, with an incubation period that can last years or even decades, the emergence of vCJD in humans in the late 1990s alarmed officials responsible for the safety of the blood supply, said Dr. Rita Reik, chief medical officer for OneBlood, a collection center in Florida.

“It was a scary new disease,” Reik said. “Which is why it required such a length of time to study this disease to get a level of comfort to get to the deferral.”

Tracking down lost donors has been a challenge, said Dr. John Armitage, chief executive of the Oklahoma Blood Institute. His staff has used emails, postcards and phones to contact more than 6,300 donors who were turned away since 1999. So far, about 350 have returned to donate.

“We feel good about that as a first effort,” Armitage said. “We know there are folks that we haven’t reached yet.”

Bans remain in place for people who are suspected of having vCJD or related diseases, those who have a blood relative with a related disease and those who received pituitary human growth hormone or a certain type of brain tissue transplant from cadavers.

The now-lifted military ban included Schermerhorn, a retired Army lieutenant colonel who was stationed in Germany from 1988 to 1992.

Schermerhorn stayed away for years — until he saw a local news story about the recent change. He’s donated his rare type O-negative blood eight times since last year.

Schermerhorn is grateful to past donors for their help after his brother suffered serious injuries in a boating accident.

“My older brother took nine pints from strangers,” Schermerhorn said. “They were part of the lifeline that kept him alive.” ___