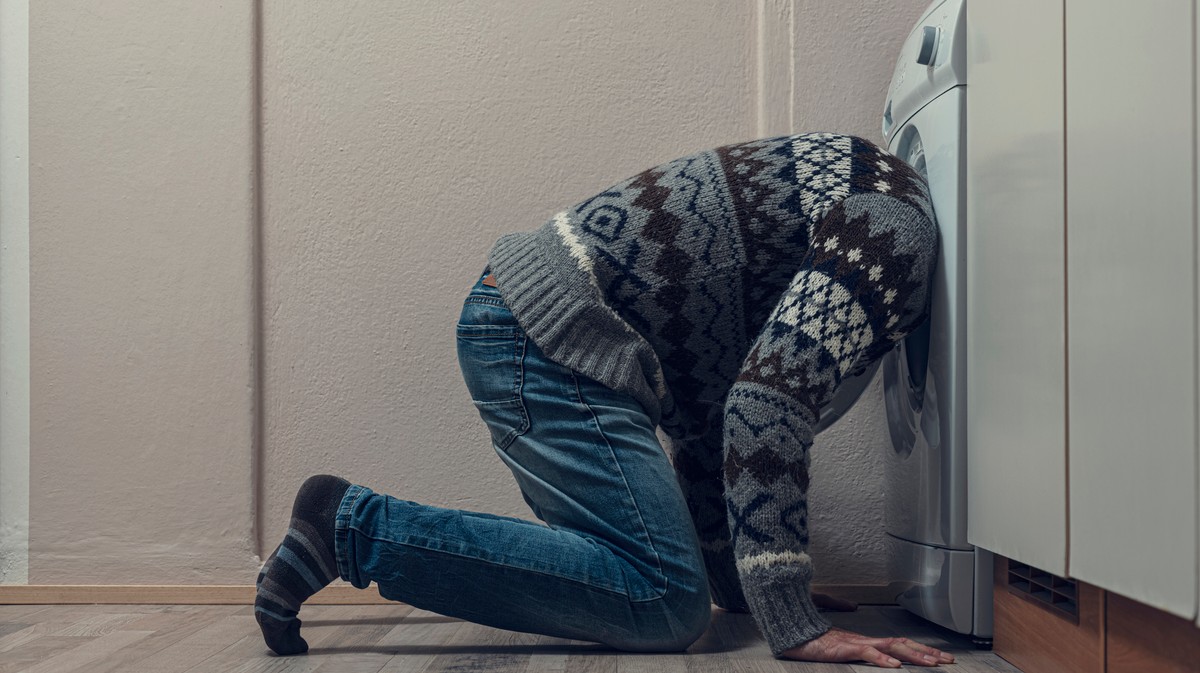 On the day 29-year-old Londoner Lianne moved in with her now-ex boyfriend, six years ago, she remembers crying. Her name was changed to protect her privacy. Not, as you might expect, because of excitement or joy. It was because she knew that from then on, it would be “all of [their] her life admin”.

Over the year they lived together, this fear became reality. Lianne recalls, “It struck me that he was actually a man-child” when he couldn’t use the washer or make his bed. And, although he made minor efforts to “improve” at chores, he just “didn’t seem capable of doing so”. He broke her favourite knife, flooded the kitchen, nearly set the flat on fire “multiple times”, and would go missing on three-day benders. “He seemed to feel bad, but justified his ignorance by saying his parents never expected him to do any chores at home,” she says. “Bear in mind, he’d moved out of his parents’ house seven years earlier.”

This behaviour, and the ensuing plethora of excuses, will likely be familiar to many people who’ve lived with cisgender heterosexual men. Though not exclusively – but more on that later.

Dubbed ‘man-children’, these men can be characterised by a number of child-like traits, including ‘not noticing’ the dishes need washing or bins need emptying and weaponising their own incompetence when they eventually do it; being ungrateful for the emotional and physical care provided by their partner, and general helplessness when it comes to taking care of themselves – and, sometimes, their own kids.

Now, this phenomenon has officially been confirmed by science. Recent study, published in Archives of Sexual Behaviour journal found that men-children not only exist but are actually killing women’s sexual libidos through their ineptitude.

Researchers from universities in Canada and Australia set out to explore if this kind of relationship unfairness could explain why many women, partnered with men, report a low sex drive. They found that women who do more housework than their partners tend to view them as a child. This, unsurprisingly, reduces their sexual desire for that person. Ongoing inequalities in domestic labour have even been cited as why more women file for divorce than men. (Recent statistics show women carry out 60 percent more unpaid work than men. )

According to the authors, until their research, this heteronormative dynamic had never been studied in relation to women’s sexual satisfaction or desire in relationships before. Emily Harris, one of the co-authors, says this is because “there’s a few unspoken assumptions” about women’s sexual desire. She tells VICE that one of the reasons for low [sexual] desires is due to individual factors like stress and hormones, as well as general factors like conflict and dissatisfaction. “What these assumptions miss, is the broader context of gender inequity.”

Sari van Anders, another co-author, adds that many people find comfort in these assumptions. “It can feel more manageable to change your hormones, or try stress reduction techniques, than tackle structural inequalities,” she says.

The correlation between man-babies and low libido hasn’t been overlooked by the women who’ve dated – or lived with – these men, though. “Our sex drive completely died after six months of living together,” reveals Lianne. I couldn’t accept him as a serious person anymore, and I resented his role in the relationship. I felt like his mum.” Although she’s in a much happier, balanced relationship now, Lianne says her man-child experience has influenced her view on having actual children. She says, “I cannot imagine spending more than two decades caring for someone who isn’t grateful for my labor.”

Emme Witt, a 48-year-old writer from Los Angeles, knows what it’s like to simultaneously care for children and a man-child. Her ex-husband was childish, and he didn’t support her around the house, until she had children of her own. “Suddenly I realised that not only was I in charge of the housework, but also all the child-rearing,” she says. “I had to discipline our kids on my own – my ex would even steal away to the bedroom when they were acting out. It was exhausting.”

Like Lianne, Witt found that her ex’s behaviour eradicated her sexual interest in him. They had a “sexless marriage“, by the end. “Now that I’m with a totally capable man, I’m eager to have sex with him, because I’m filled with affection for how he treats me,” she says. “I see him as a bonafide grown-up, not a boy I have to take care of.”

One key characteristic of ‘man-child’ behaviour appears to be the pattern of listening to their partner’s complaints, changing for a short while, then regressing to their former ways.

“When I’d bring up my grievances, he’d be very apologetic and feel guilty that I’d been bearing the entire workload of chores,” 24-year-old Katie, from Nevada, says of her now-ex boyfriend. (Her name has been changed to protect his fragile ego.) He would try to help for a few weeks because of his guilt. But when he realised it required continued work and effort, he’d give up. He told me so many times that he was going to change and never did.”

Now, the big question: why does it happen? Jordan Dixon, a London-based psychotherapist, tells VICE: “Many humans struggle to look after themselves both emotionally and physically. The struggle begins in your relationship with yourself, then it can turn to problems with our relationships with other people. This could be due to patterns that we have learned in early relationships and childhood.

Dixon rejects the term ‘man-child’. Instead, she prefers to use ‘adult-child’ – because, as she says, anyone can be a child in a relationship, regardless of gender and sexuality. However, Dixon points out that this dynamic is often influenced by heteronormative expectations of gender. Dixon explained that males are often under greater social pressure to follow traditional gender roles, which historically have not covered domestic labor.

At the same time, many studies have shown women are more likely to take on carer roles. This is thanks to societal expectations of them “‘being for others’ rather than ‘being for themselves'”- as Simone de Beauvoir argues in The Second Sex. Dixon explains this can lead to “emotional and physical burnout, otherwise known as ‘human giver syndrome'” – leaving its sufferer emotionally depleted and, potentially, resentful of their partner.

Although we associate the so-called ‘adult-child’ with cis het men, Dixon asserts that it regularly occurs in same-sex or even gender non-conforming relationships, too. This was certainly the case for 26-year-old Charley from London, who experienced this dynamic in their recent masc-femme queer relationship. Their names have been changed to protect their safety. When their now-ex partner moved in with them during the Covid-19 lockdown, Charley realised they didn’t know how to look after themselves at all. Charley realized that they didn’t know how to cook or do chores, even though their tastes were very restricted.

“Some people lack skills and need their hand holding when learning how to do basic stuff, but some will just take advantage of you when they realise you’re willing to do things for them,” says Charley. It’s not uncommon for cis-het men to do this, but it is less common for people of other genders. When you’re not living in a heteropessimist fantasy, you realise that these manipulation techniques are shit that people do, just because they can.”

That’s not to say these tactics don’t generally stem from heteronormative gender roles, though, or that they aren’t more common in heterosexual relationships.

“Those who benefit from norms are much less likely to question them, and often actively support them,” says van Anders. Because cis-het men are able to benefit from the social presumption of women taking on more domestic and solemn labour, it means they are less likely to try to alter this status quo. LGBTQ+ people – who are often persecuted by heteronormativity – are more likely to actively divert from this script.

Well then, what’s the solution for those dating an adult-child, particularly if – despite it all – they don’t want to break up with them? This is the position 22-year-old Annie, from the UK, has found herself in. She moved in with her boyfriend early this year and discovered that he is not only unable to do chores, but also plays video games till the wee hours of the morning. To make matters worse, he doesn’t take criticism well, even if it’s constructive to him or his relationship.

“He sees it as a personal attack,” says Annie, who has brought the topic up several times. She’s even suggested methods to manage the division of chores – but, so far, to no avail. “I feel flat about it,” she says. She says, “I care more about him than I love him. But it is less.” I can feel myself pulling away.” For now, Annie’s come up with a probably flawed solution: “I’m just going to not clean his shit up for a while and see what happens.”

When it comes to professional advice, Dixon says it’s worth considering whether the relationship dynamic is partly fuelled by them taking on a parent/caregiver role, thus enabling the adult-child behaviour. It might help to reevaluate all the aspects of their relationship, including those with themselves. If this doesn’t work – as it didn’t for so many of the people quoted in this piece – it might be worth consulting a therapist. If the problem is too embedded, perhaps reconsider the relationship completely.

As for the man-child himself, there’s a fairly simple solution. Harris says that men should share an equal amount of the household work. “This means thinking critically about what they rely on their partners for, including planning social events and providing emotional support for themselves and their children.”

Van Anders adds that men also need to encourage these changes among other men. “This will make for more equitable relationships which, in the end, reflects values we should all strive for,” she tells VICE. “With the added potential bonus of improved sexual experiences.”

Ultimately, the man-child isn’t just bad for society, it’s bad for literally everyone’s sex life. “Foreplay starts the moment you wake up in the morning. Katie says that if you awake to a thousand chores, and your partner won’t help you with them, it’s an enormous turn off. Foreplay doesn’t just warm the body, but it also helps to calm the mind. If your partner constantly does things to show you he respects you and wants to be an active partner in your life – nothing is sexier.”