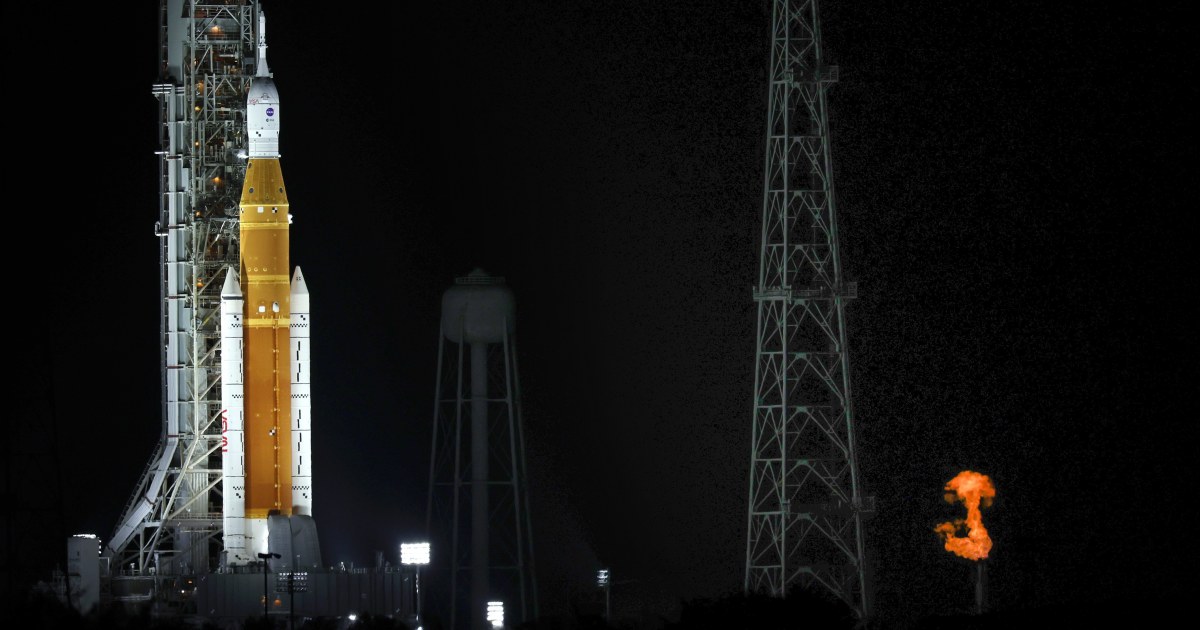 Fifty years after the final Apollo moon mission, NASA has embarked on a crucial first step toward returning astronauts to the lunar surface. The agency launched the new spacecraft and megarocket on Wednesday’s mission to the Moon in uncrewed flight Artemis I. The huge rocket blasted off from NASA’s Kennedy Space Center in Cape Canaveral, Florida, at 1:48 a.m. ET.

“[F]or the Artemis generation, this is for you,” launch director Charlie Blackwell-Thompson, the agency’s first female launch director, said before giving the go-ahead for liftoff.

The event was the long-awaited first liftoff of NASA’s Space Launch System (SLS), a next-generation booster that the agency says is the “most powerful rocket in the world.” Atop the 322-foot-tall rocket was the gumdrop-shaped Orion capsule that will eventually carry astronauts to the moon.

The 26-day Artemis I flight is designed to test both the SLS rocket and the Orion capsule before missions with humans onboard. The spacecraft is carrying a set of mannequins laden with sensors to study conditions during the flight and to measure radiation levels throughout the mission.

The Orion spacecraft will journey to the moon and remain in orbit there for a few weeks before returning to Earth. On December 1, the capsule will splash down in Pacific Ocean. 11.

The Artemis I mission finally got off the ground after two previous attempts — one in late August and another in early September — were called off because of a faulty sensor and a series of hydrogen fuel leaks.

The flight was also thwarted due to stormy weather. The rocket was rolled back to NASA’s Vehicle Assembly Building in late September ahead of Hurricane Ian, which caused catastrophic damage across southwestern Florida. Last week, the agency was again forced to reschedule the Artemis I launch as Hurricane Nicole slammed into Florida’s east coast on Nov. 10, making landfall more than 70 miles south of the launch pad, according to NASA.

This time, the huge SLS booster did manage to rocket into orbit, though the countdown to liftoff was not without its own drama.

Shortly before 10 p.m. ET, intermittent leaks of liquid hydrogen were detected from a valve at the base of launch pad. These leaks were not the same as those which forced NASA to cancel its first Artemis launches.

The agency sent a “red team”, a group of highly-trained technicians to the launchpad to tighten bolts. Officials from the agency said that the work was done close to the rocket’s main fuel tank, in the area known as “the blast danger zone”. Safety teams closely observed the situation.

Despite running around 40 minutes behind schedule, engineers were able to fix the leak and proceed with the rest of the fueling process and countdown.

NASA’s return-to-the-moon program is called Artemis, named after the goddess of Greek mythology who was the twin sister of Apollo. If this and subsequent test flights are successful, the agency could send humans to the lunar surface as early as 2025.

As part of the Artemis program, NASA envisions regular missions to the moon to establish a base camp on the lunar surface before the agency eventually ventures to Mars.

The much-anticipated Artemis I test flight comes after more than a decade of work by NASA to develop a new megarocket that surpasses the capabilities and size of the iconic Saturn V rockets used during the agency’s Apollo moon program, which had its last flight in 1972. Over the years, criticisms have been levelled at NASA for putting years of work into this project and spending billions more than it was budgeted.

In a House Science Committee hearing earlier this year, NASA Inspector General Paul Martin said the agency will likely spend $93 billion on the Artemis program from 2012 to 2025. Martin added that each Artemis launch is expected to cost around $4. 1 billion.

If successful, Artemis I will be followed by a planned Artemis II test flight, tentatively scheduled for sometime in 2024. That mission will launch four astronauts in the Orion spacecraft on an expedition around the moon. After that, NASA said the Artemis III flight will include the first woman and first person of color to land on the moon.

The post NASA heads back to moon with Artemis I launch appeared first on NBC News.