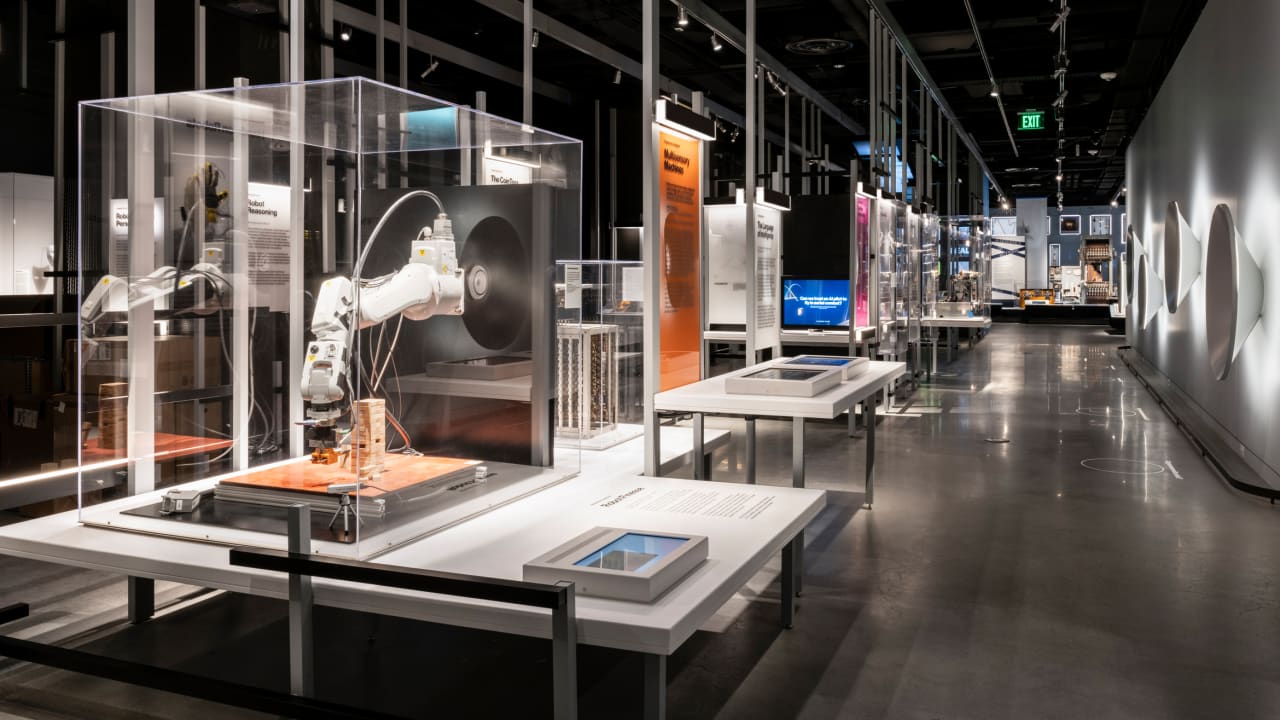 Taking a seat at a desk with the American flag draped in the background, President Richard Nixon addresses a television camera. It’s July 1969, and the U.S. has just attempted to land two men on the surface of the moon. “Good evening, my fellow Americans,” Nixon says somberly. “Fate has ordained that the men who went to the moon to explore in peace will stay on the moon to rest in peace.”

The Apollo mission has failed, or at least it has in this alternate version of history. The speech Nixon is reading is real, written in case NASA’s moonshot fell short, but the video is a deepfake—a disconcertingly convincing video re-creation of Nixon made using artificial intelligence by researchers and artists at the Massachusetts Institute of Technology. On display in the recently reopened MIT Museum, it’s an example of how emerging science can materialize in unanticipated ways.

The compelling and sometimes worrying territory where new technologies intersect with society is the overarching subject matter of the MIT Museum, which has just undergone a complete redesign for its new purpose-built space in Cambridge. Expanding out from the museum’s previous home, it now has three floors in a 17-story commercial tower to tell the story of MIT, its scientific achievements over the years, and the ways its research continues to bleed into the real world.

“We’re asking questions as to what are the impacts, what are the decisions that need to be made, how do we use these technologies to improve our world and our lives,” says Ann Neumann, director of exhibitions and galleries. With more than 1 million objects in a collection dating back to 1861, it’s a space that could easily have become unwieldy.

Neumann led the redesign, noting that the goal was to create an experience that uses art to increase accessibility to what can seem, on its face, like complex subject matter. “Braiding the science and the art together, I think it places the science into the context that it is part of our culture and our lives, it’s not a white tower experience,” Neumann says. She wants the museum to dissuade people of the assumption that MIT is “too smart for them or too elitist or not welcoming. Our intentional mission is to be that open door to the rest of the community.”

Across a half dozen galleries, the museum presents the rich history of MIT’s role in the advancement of science and technology—from the individual works of Nobel Prize-winning scientists to the physical models used in classrooms and laboratories—to better understand both the microscopic and the cosmic. With exhibition design by Studio Joseph and interactive experiences created by Bluecadet, the museum also exposes visitors to emerging topics like gene editing and artificial intelligence.

The AI gallery is a highlight. In addition to the deepfake video of Nixon, it offers an interactive window into how the technology works, even inviting collaboration with an AI to write a piece of poetry. “We were really trying to have these experiences where you’re learning by doing,” says Katie Savage, creative director at Bluecadet.

The museum’s exhibitions also integrate a lot of video, embracing the dynamic side of scientific experiments and discoveries. “A lot of times when you go to museums you see things and you have to read a label, and you just don’t know what they are,” says Wendy Joseph of Studio Joseph.

“In this museum you can learn a lot without necessarily reading the label. You get to see how things work,” she adds. “You feel like you can explore, you can take some risks, especially with interactives.”

That thinking extends out from the individual galleries to the museum’s main floor, which aims to soften the boundaries between the university and the surrounding community. Set on the first three floors of a new building designed by the architects Höweler + Yoon, the museum’s ground floor is open to the public and steps away from a transit stop.

There’s a forthcoming café, and a large grand staircase that acts as an off-hours gathering space and a location for events. “You can have an intimate conversation with a Nobel Prize winner there, or students can present their research,” Neumann says. “It’s an active public forum at the heart of the museum.”

Creating a space that feels open, and that counters the stereotype of MIT being some vaunted ground reserved for supergeniuses, is an integral part of the museum’s mission.

“It’s important,” Neumann says, “to be a place where the community can be a part of the conversation and the decision-making process in how these technologies that are changing our world are being implemented.”