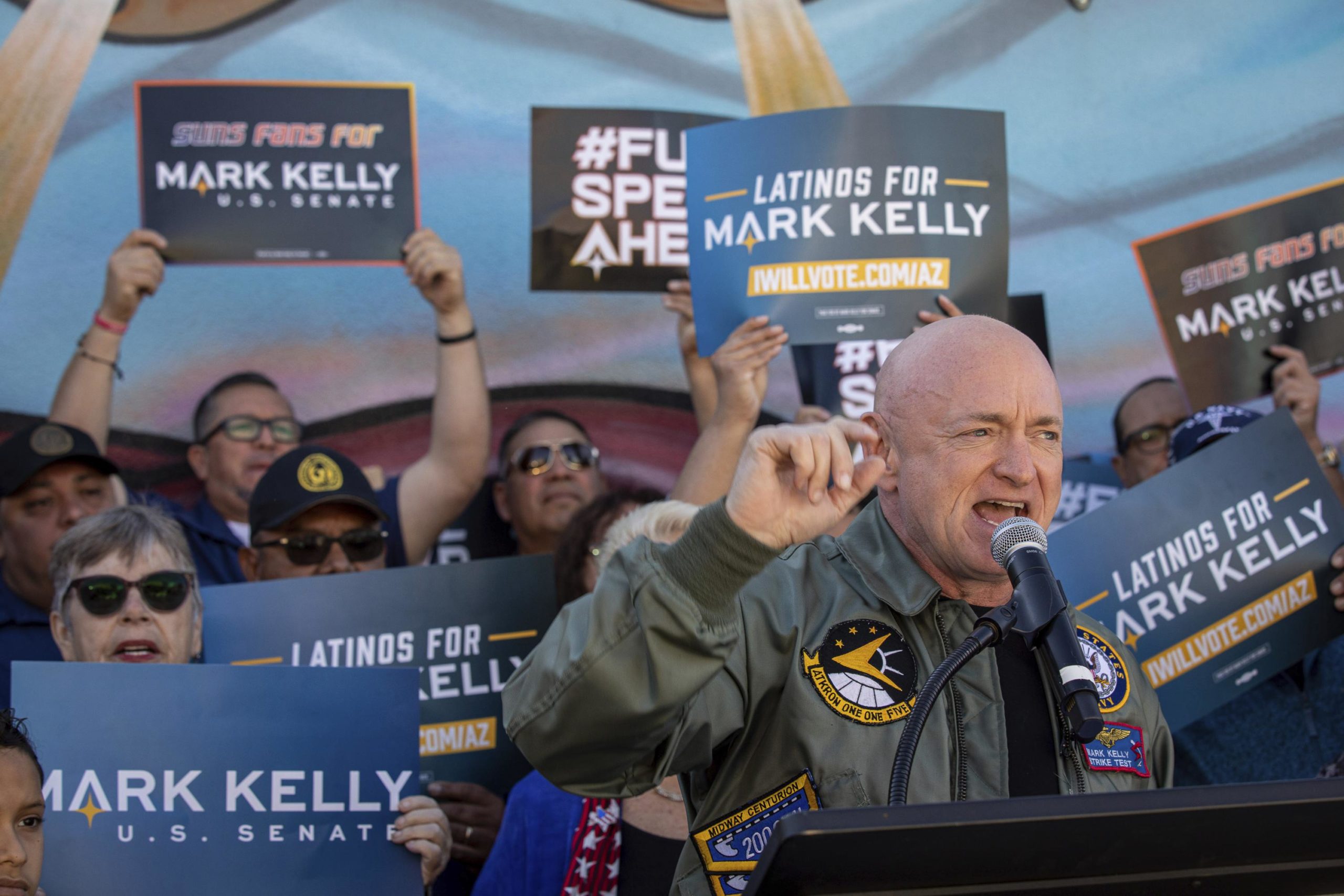 PHOENIX — Democratic Sen. Mark Kelly urged Arizonans to let go of “conspiracies of the past” on Saturday, calling for unity a day after he won reelection to a crucial Senate seat.

Arizona was central to former President Donald Trump’s push to overturn the 2020 election and cast doubt on the legitimacy of President Joe Biden’s victory. Kelly tried to get past the false allegations of fraud that had shaped Arizona’s political landscape for two years.

Kelly defeated Republican Blake Masters, who along with most of the rest of the GOP slate was endorsed by Trump after pushing the lie that the 2020 election was stolen.

“After a long election, it can be tempting to remain focused on the things that divide us,” Kelly said in a victory speech at a Mexican restaurant in Phoenix. “But we’ve seen the consequences that come when leaders refuse to accept the truth and focus more on conspiracies of the past than solving the challenges that we face today.”

Kelly won after distancing himself from Biden and building an image as an independent lawmaker not beholden to his party. He cast himself in the mold of his predecessor, the late Republican John McCain, whose influence is still felt in Arizona politics four years after his death.

He stated that every day he can remember sitting in that seat McCain used to hold. Kelly was elected in a special election two years ago to finish McCain’s term. His victory this year gives him a full six years starting in January.

“Sen. McCain embodied everything it was to be a leader at a time when our state and our country remain divided,” Kelly said.

Kelly, a former NASA astronaut who’s flown in space four times, is married to former U.S. Rep. Gabby Giffords, who inspired the nation with her recovery from a gunshot wound to the head during an assassination attempt in 2011 that killed six people and injured 13. Kelly and Giffords went on to co-found a gun safety advocacy group.

Giffords, whose own promising political career was cut short by the shooting, sang along to the music as Kelly was introduced Saturday and stood next to him beaming as he spoke.

Kelly and Giffords were at an Elton John concert in Phoenix on Friday night when they learned The Associated Press and other news organizations had called the race.

Kelly’s victory put Democrats one win away from clinching control of the chamber for the next two years of Biden’s presidency.

With Vice President Kamala Harris’ tiebreaking vote, Democrats can retain control of the Senate by winning either the Nevada race, which remains too early to call, or next month’s runoff in Georgia. To win the majority, Republicans must now win both of these races.

Masters did not concede, saying in a statement that his team will make sure every legal vote is counted.

” If Senator Kelly had more votes than me at the end of this election, I will be congratulating him for a well-fought win.” Masters stated. “But voters decide, not the media; let’s count the votes.”

The AP declared Kelly the winner after the release of results from 75,000 ballots in Maricopa County made clear Masters could not make up his deficit.

Hours earlier, Masters said on Fox News that Maricopa County, by far the largest in the state, should stop counting ballots and start over because election officials had inadvertently mixed counted and uncounted ballots.

Megan Gilbertson, a spokeswoman for the county elections department, confirmed ballots were mixed at two vote centers but said there are contingencies to reconcile each batch and get an accurate count. She said similar mistakes have been made before, the process has been in place for decades and is overseen by observers from both parties.

“There is no legal process in place to stop counting and start over,” Gilbertson said. “At Maricopa County, we follow the laws as they are written.”

The closely watched race for governor between Democrat Katie Hobbs and Republican Kari Lake was too early to call Saturday. Maricopa, Pima and Yavapai counties, which account for the overwhelming majority of the uncounted ballots, continued tabulating them on Saturday and were expected to release new results in the evening.

About 50 conservative protesters gathered outside the fence around Maricopa County’s election tabulation center at midday Saturday to draw attention to their concerns about the vote as about 30 journalists watched.

The scene was noisy but peaceful, with a number of county sheriff’s deputies nearby guarding the fenced-off complex.

A few protesters were wearing ballistic vests and handguns. Some carried American flags, campaign signs for Lake or signs with slogans such as “Kari Lake Won,” “Count The Votes” and “Hobbs is a Cheat.”

The post Mark Kelly: Time to let go of “conspiracies of the past” appeared first on Associated Press.