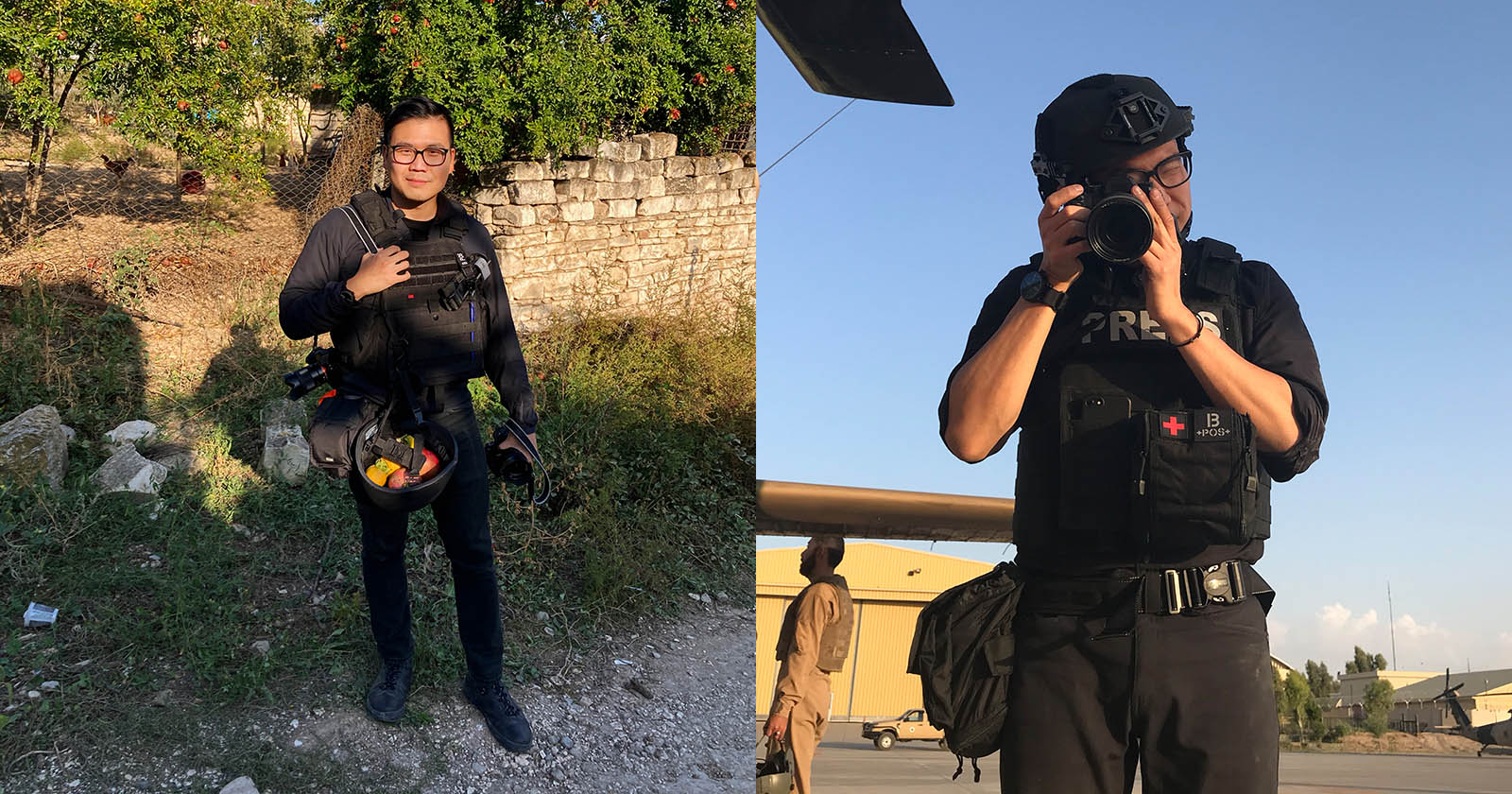 Los Angeles Times roving foreign correspondent and photojournalist Marcus Yam was recently awarded the 2022 Pulitzer Prize in Breaking News Photography “for raw and urgent images of the U.S. departure from Afghanistan that capture the human cost of the historic change in the country.”

PetaPixel spoke with Yam to learn about his journey from growing up in Malaysia and studying aerospace engineering to becoming one of the world’s top conflict photographers with a Pulitzer Prize to his name.

Documenting the Fall of Afghanistan

When the United States announced that it would be withdrawing troops from Afghanistan, Yam wanted to be there to record what he felt was going to be an uneasy transfer of power. Yam landed in Afghanistan on August 14, 2021, as the Taliban was advancing on the capital Kabul on the double. The very next day, Afghanistan fell to the Taliban, to the surprise of the U.S. and the world.

Yam continued to be in Afghanistan between August and October, even though most of the western media had left. He wished to record the brutality and suffering perpetrated on the citizens after 20 years of living in relative safety with the presence of American troops.

As chaos quickly spread throughout Afghanistan, several editors at the Los Angeles Times asked Executive Director of Photography Calvin Hom to get Yam out of Afghanistan for his own safety. Yam convinced his DOP to allow him to continue visual and writing reporting.

“I told them that we have a responsibility to stay with this story, and I wanted to see it through,” Yam tells PetaPixel. We have a unique view, so we need to pursue it.

“When the Taliban was encircling Kabul, and other news organizations were pulling their journalists out, I had a decision to make. I’m thankful I have very trusting editors who allow us to follow our instincts on the ground.

” Of course it was a calculated chance. But I wasn’t afraid. I was amongst just a handful of westerners that remained behind. Every day, I made exit plans just in case. And even after my run-in with the Taliban [detailed below], I pleaded to my editors to stay and keep working. I went back to work the next day or two with a terrible headache and swollen forehead.”

Sucker-Punched by the Taliban

In August 2021, Yam was covering a protest when “At some point, I moved to take a picture of a scuffle,” he writes in an account published in the Times. One tugged at my camera strap and I felt the energy connection from a fist against my side. A Taliban fighter had sucker-punched me. He was a tall, burly man who started screaming in Dari, the local language, pointing at our cameras.”

Fortunately, a second Taliban fighter present, who also earlier attacked Yam, could speak English and understood when the photographer explained that he was a protected journalist.

“He apologized profusely for our troubles, but not for beating us,” Yam writes. They became curious: Each of us was given a bottle cold water, and one can Monster Energy. This drink is a favourite of U.S soldiers who ruled the area until just a few days before the attack.

From Afghanistan to Ukraine

After Russia invaded Ukraine in late February 2022, Marcus traveled to Kyiv, Ukraine, in March to cover the conflict amid military bombardments. Fox News cameraman Pierre Zakrzewski, whom Yam knew well, was killed along with two others covering the war.

“It could have been any of us,” Yam says. “I didn’t for a second think it could not be me. That’s why working in conflict zones is difficult.”

Yam is unable to explain the photographs of war in Ukraine.

“It’s unpredictable. It’s also heartbreaking. But I am also very loved by the humanity on full display in this war,” he adds. It is a war. It is horrific, and it is senseless.”

On that first trip to Ukraine, Yam had to step away from the conflict for health reasons.

“I was not injured in the conflict, but it took its toll on me,” he says. “I eventually got really sick, and my over-the-counter medication wasn’t working. My body just gave up.”

It takes quite a bit to stop Yam in his work, as the photojournalist seems to have it in his blood to continue telling a story even when he is exiting a scene. In October 2021, when Yam was finally leaving Afghanistan on a humanitarian evacuation flight from Kabul to Doha, Qatar, the flight was still taxing on the runway when they heard the news that a local mosque had been bombed. At that moment, Yam briefly considered asking the pilot to let him off the plane so he could go back to work.

Yam was born in Malaysia, making him the first Malaysian-born photojournalist (and sixth Los Angeles Times journalist) to win a Pulitzer for photography. It was his first year of foreign reporting when he received journalism’s highest honor. This makes it even more impressive.

“I was not involved in photography in Malaysia,” says Yam. Looking back, I can see that my passion and focus in what I do have been singular. I oftentimes don’t allow room for much more. As the phrase goes from my favorite movie, Gattaca, ‘You want to know how I did it? This is how I did it: I never saved anything for the swim back.’

Yam grew up in Kuala Lumpur, the capital of Malaysia, where he nearly dropped out of high school as he was spending most of his waking hours playing video games and dreaming of becoming a professional esports gamer.

But he soon realized his adulthood would be difficult, got back into studies, and at age 19, was accepted at the University of Buffalo, New York, from where he holds a degree in aerospace engineering. With aspirations to one day become an astronaut, he had chosen the aerospace engineering major.

“I Fell into Photography Because I Was Lazy”

“Towards the end of my time in university [of Buffalo], I was a student in need of English credits in order to graduate, and the college newspaper offered said credits in exchange for writing or photography services,” explains Yam. “Clearly, I thought I chose the path of least resistance. So, I bought my first real camera.

“I fell into photography because I was lazy.”

John Davis, then Design Director at the Buffalo News, offered him a photo internship during his student days. Yam laughed initially at this idea. Davis explained to Yam that he was special and that he would be able to go back into aerospace engineering if it didn’t appeal.

“I could not say no to that challenge,” Yam wrote in an Instagram post in 2017. “I am completely indebted to folks like him for helping [me] grow into the photographer I am right now.”

“After my first internship at The Buffalo News, I was at a loss. Yam says that although I made one of the most important decisions in my life, I did not have any guidance. “So, I pulled up my sleeves and went to work. I met teachers like Loret Steinberg, a professor at RIT. I worked for legendary editors like Michel du Cille and Michele McNally, who were not afraid to tell me that I needed a lot more work on myself and my voice in order to succeed.

“It was not enough that you knew how to take a good picture. They taught me that you needed to know why you were making pictures and what kind of meaning you seek from it.”

Yam has been in the photojournalism business for more than a decade, but he really began his professional career in New York when he caught a big break with a prestigious internship with The New York Times.

“My internships at the Washington Post and The New York Times led to what most consider a lucrative freelance career in NYC. I worked every day. I lived in the largest city in America. And I was young and hungry. At some point, McNally asked me if I knew why I wanted to become a photographer. McNally could tell that I hadn’t answered this existential question.

“That conversation sent me on a quest. So, I left New York and took a position at The Seattle Times. Why? I wanted to grow… After three years in NYC, I realized [I] was chasing success and a paycheck, but I was hitting a plateau in terms of challenging myself.”

In Seattle, Yam ended up being with a team of journalists who were awarded a Pulitzer in 2015 for their coverage of a deadly 2014 landslide in Oso, Washington.

The work was more community journalism oriented, and Yam even dabbled in conceptual work involving a series of triple exposures to illustrate an essay about Seattle being a global city. His work was often in the rain. It wasn’t because the weather was bad, but because he did not know how to deal with the rain. He fixed it and was now ready to tackle the next challenge.

“Eventually, I outgrew my role in Seattle,” says the photojournalist. “It had only been a year or so into my job. Calvin Hom was the Director of Photography for the Los Angeles Times ,. He recruited me to join him. It was the beginning of my journey. I have been here since, and come this October, for as long as I am still employed, I’ll mark eight years with this fantastic institution.”

Yam has also documented deadly clashes in the Gaza Strip, covered the San Bernardino, California, terrorist attacks in 2015, the deadly landslide in Oso, Washington, and many other critical events for which he has received numerous awards.

Yam shoots with a Sony a9 II full-frame mirrorless camera with the Sony FE 24-105mm f/4 G OSS, a zoom lens he leaves on his camera body all the time. This arrangement allows him to travel light in the field. Two additional small lenses are also included in his bag.

Yam shoots both RAW as well as JPEG, and his favorite photo software for culling is what most photojournalists use: Photo Mechanic.

At the time of this writing, Yam has once again traveled from Los Angeles to Ukraine to take viewers to the frontlines of the ongoing conflict and struggle.

You can see more of Marcus Yam’s work on his website and Instagram, and all 15 photos of his Pulitzer-winning portfolio can be found on the prize’s website.

About the author: Phil Mistry is a photographer and teacher based in Atlanta, GA. He started one of the first digital camera classes in New York City at The International Center of Photography in the 90s. He was the director and teacher for Sony/Popular Photography magazine’s Digital Days Workshops. He can be reached here.