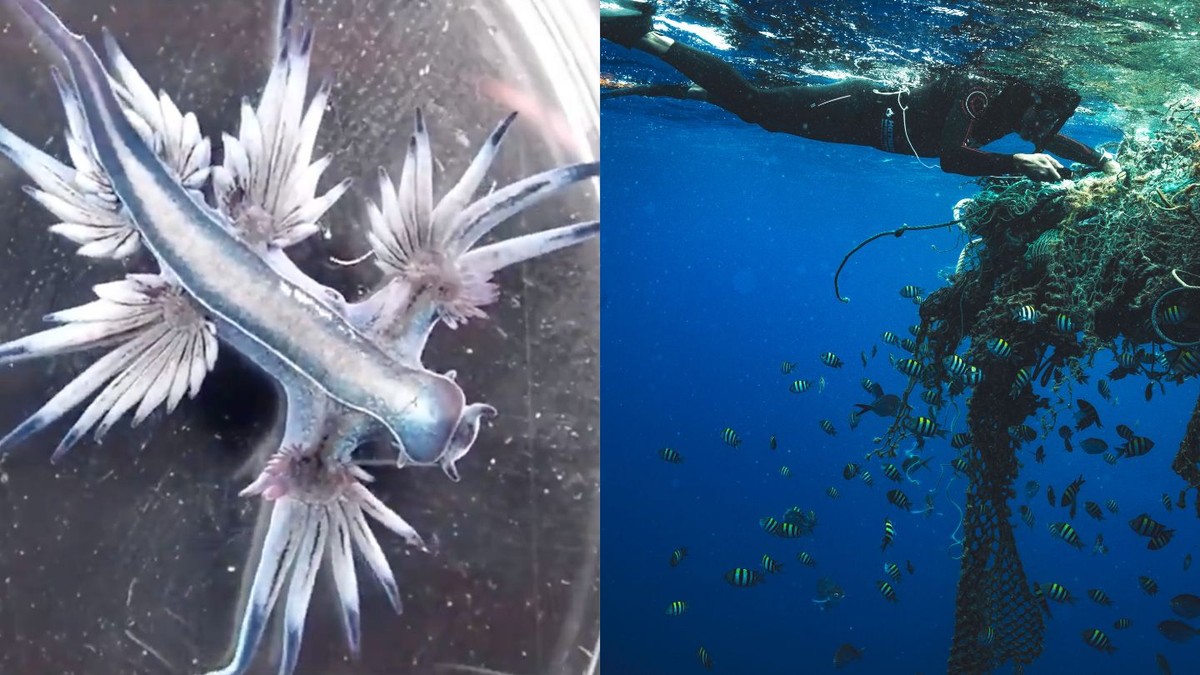 During the summer of 2019, distance swimmer Ben Lecomte planned one of his most ambitious expeditions yet, to raise awareness for a man-made problem that is already causing massive issues for marine life: plastic pollution.

On his journey through the middle of the Pacific Ocean, he found large pieces of debris like a toilet seat and a hardhat, innumerable amounts of microplastic—and, most surprisingly, a bountiful supply of small and large marine organisms living in and around the pollution.

Lecomte swam through the Great Pacific Garbage Patch, a heterogeneous collection of micro- and macro-plastics suspended in the North Pacific Ocean between Hawaii and California, and partnered with researchers to study the contents of the trash gyre. Throughout the two-and-a-half-month expedition, he swam 338 nautical miles in 44 separate legs—a record-setting distance—spending around six hours each day facedown in a sea of microplastics.

“At its highest concentration, it looked like a snowstorm,” he said. “It was disgusting, and very, very disturbing.”

Discovered in 1997, the Great Pacific Garbage Patch is a plastic accumulation zone, where the ocean’s currents bring together debris from around the world. If the ocean is a dirty bathtub, the Great Pacific Garbage Patch is the vortex of trash formed when you pull out the drain stopper. It’s the largest and most infamous garbage patch, and research suggests it is rapidly growing. Humans have been devising ways to clean it up as long as we’ve known about it, mainly by using a method similar to trawl fishing to remove plastic floating on the surface of the ocean. New research conducted during Lecomte’s swim suggests that this technique may do more harm than good by scooping up naturally occurring communities of neuston, which are organisms that live on the ocean’s surface—even in the Great Garbage Patch.

Rebecca Helm, an assistant professor of biology at the University of North Carolina, Asheville, used Lecomte’s voyage to study these life forms, which include snails, the Portuguese man o’ war, and rare blue sea dragons. These creatures do not swim so much as float, meaning they are at the whim of the ocean’s tide—not unlike the plastics that make up the patch. Lecomte also swam with other creatures that were not neuston, like fish and marine mammals.

Helm and her team wanted to see if the Great Pacific Garbage Patch contained neuston at high concentrations, in addition to microplastics. In a preprint posted online in late April, the team presented evidence of copious neuston living throughout the patch and found a correlation between abundance of plastic and floating life. Trawling the ocean surface, then, would potentially also remove these small marine creatures.

One way to think about their findings, which have not yet been peer-reviewed, is to picture a meadow where wind has dispersed both dandelion seeds and plastic bags in similar distributions.

“We’ve been looking at this meadow and going, ‘Well, this is a dump,’ not seeing all the life that existed around the plastic and probably way, way before the plastic,” Helm said.

Helm posted a thread on Twitter to debunk the myth that the areas in the patch replete with plastics are devoid of life. On the contrary, because of the food webs anchored by neuston, Lecomte said he swam with a sperm whale on a day that researchers aboard the support vessel measured some of the highest concentrations of microplastics in the water.

It’s important to be clear that this is not an inspirational example of nature adapting to the anthropocene, nor does the research imply that plastics are somehow beneficial to neuston and other marine life. Rather, this is a textbook case of correlation, not causation, said Helm.

“These animals are not interacting with plastic in a direct way,” she said. “They’re just being concentrated in the same way.”

Still, some of the larger life forms that were not neuston did appear to have closer ties to the plastic. It was common for crabs living on larger pieces of trash in the patch to hitch a ride on Lecomte, going unnoticed until he reboarded the boat. And once, he said, he noticed a school of fish swimming underneath him before darting back to their home. Upon following them, he realized they were living around large pieces of debris.

“They were leading me back to what had become their house,” he said.

Though a number of sailors have traversed the region by ship, Lecomte is one of the only people on Earth to get an up-close look at the Great Pacific Garbage Patch. He has spoken to sailors who tell him, “It doesn’t look that bad,” he said, because they can only see the water’s surface. The patch does not look like a concentrated island of trash, he added, but rather a swirling collection of debris underneath the surface of the water that takes hours of being immersed in it to fully wrap one’s head around its magnitude.

Based on the research, Helm said that cleanup measures should take neuston into account. Current approaches largely rely on nets, which she likened to taking a “bulldozer” to the ocean’s surface.

Over the course of his swim, Lecomte and his support crew found countless “ghost nets,” which are fishing nets that have been lost or abandoned at sea. Helm said organizations like the Ocean Voyages Institute use a more tailored approach to removing ghost nets; these may end up going gentler on neuston populations. She also said she wants to track the Great Pacific Garbage Patch over time to see how seasonality affects the concentration of neuston and plastic and determine whether the organisms live out their entire lives in the patch.

“It’s up to us to change our habits and to be better stewards of the environment. Right now, we suck at it.”