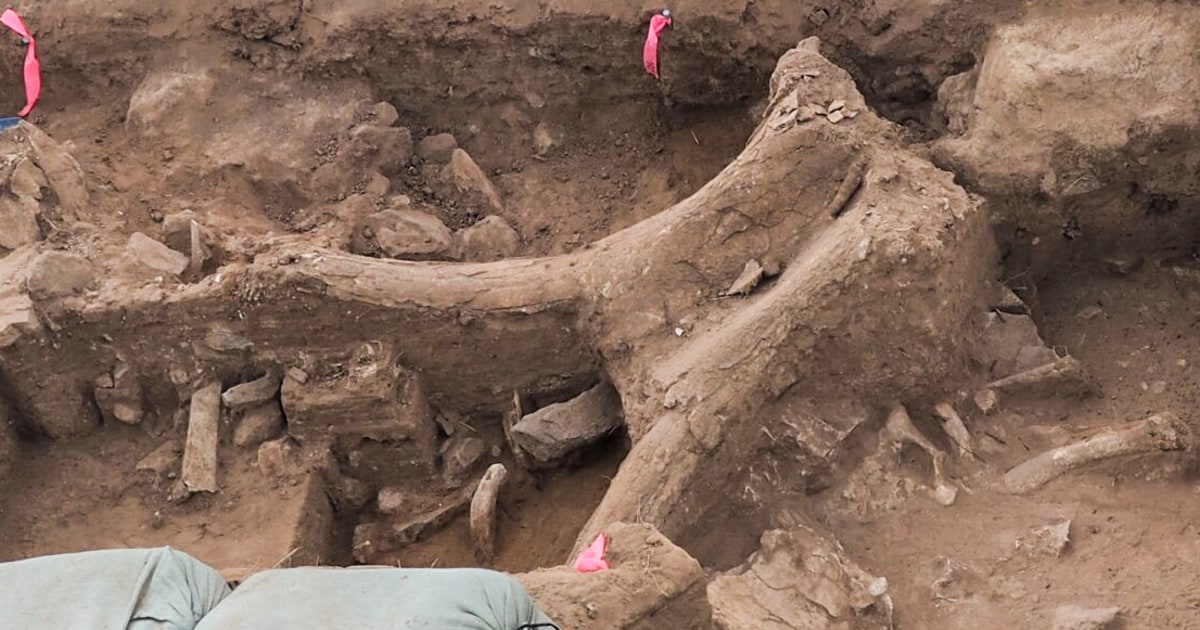 Mammoth bones and “ghost” footprints of ancient people are the latest evidence in a scientific debate about when the first humans reached the Americas.

The fossilized bones, in particular, could suggest people lived in North America tens of thousands of years before the generally accepted date for the arrival of the first Native Americans of about 10,000 B.C. BCE.

Researchers say radiocarbon dates of chemicals in the mammoth bones, from a mother and her calf, indicate the animals lived about 37,000 years ago in what’s now New Mexico. Patterns of fractures on the bones show they were butchered by humans, who must therefore have lived there at the same time, the researchers added. But the findings are disputed by some other scientists, who say the fractures could have been caused naturally.

The most recent “ghost footprints” were found on a Utah Air Force missile range. Scientists think they’re about 12,000 years old, but this is only the second time that such footprints have been found, and they support the discovery last year of ghost footprints in New Mexico thought to be at least 21,000 years old — although that finding, too, is disputed.

The mammoth bones at what’s called the Hartley site in northern New Mexico, on rocks high above a tributary to the Rio Grande, are hailed as the most conclusive evidence so far that humans arrived in the Americas up to 50,000 years ago walking over a “land bridge” between what are now Siberia and Alaska.

The researchers say they’re confident of their dating and interpretation that the fractures on them were caused by repeated impacts with sharp objects during their deliberate butchering. The researchers also believe that the bones were cooked with fire.

” I think it’s rock-solid radiocarbon dating,” stated Timothy Rowe, paleontologist at the Jackson School of Geosciences in Austin. “Skeptics will put everything under the microscope, but I think we checked every box.”

Rowe is the lead author of a study of the mammoth bones published last month in the journal Frontiers in Ecology and Evolution.

He said the fractures and tiny flakes of bone caused by the butchering process are also distinctive and seen at butchery sites of a similar age in Europe and Asia: “If this site were in northern Siberia, nobody would be blinking.”

The idea that the mammoths were butchered by early humans is supported by other recent finds, including the human footprints at White Sands National Park in New Mexico and what are said to be stone tools made 33,000 years ago in a cave in northern Mexico. Other scientists dispute the validity of the theory and its evidence. The dating of the White Sands footprints has been questioned, and some scientists think the objects from Mexico are not tools at all, but naturally pointed rocks.

They also dispute the idea that fractures in the mammoth bones can only have occurred by humans. Instead, it could have been caused either by a natural event or a landslide.

“The patterns of fractures on those mammoth bones at that site can definitely be caused by humans,” said anthropologist Andre Costopoulos, a professor at the University of Alberta in Edmonton who’s posted a detailed online examination of the latest research. “But they’re not necessarily diagnostic of a human presence.”

“We don’t have clear evidence yet, because there are other possible explanations that need to be ruled out first, and they haven’t been,” he said.

The Hartley site does not have any distinctive stone tools, which is another problem. The researchers say the people who butchered the mammoths may not have used sophisticated stone tools, but only primitive tools indistinguishable from natural bones or rocks. Other scientists disagree and say that there is no proof of such a thing. It’s possible, however, for primitive people to use better tools at the time.

Archaeologist Ben Potter, formerly at the University of Alaska Fairbanks and now at Liaocheng University in China, said there’s evidence from Africa, Europe and the Far East that Homo sapiens used complex stone tools starting about 47,000 years ago, and so their absence at the Hartley site is significant. He stated in an email, that he isn’t convinced by recent research regarding the mammoth bone and that the evidence suggests that people came to the Americas long ago. It is possible to do anything. However, we just have to have evidence to support the claim,” he said. “I don’t think they have sufficient evidence yet, and certainly not at this site.”

Some other scientists are more convinced, however, and suggest that others may be reluctant to face the possibility that some humans arrived in the Americas as long as 50,000 years ago.

“The research looks very thorough,” said Spencer Lucas, the curator of paleontology at the New Mexico Museum of Natural History and Science. “At what point will the archaeological community wake up and smell the coffee? He said that there was so much evidence.

“I’m not saying this is the final piece of evidence… but you’ve got the White Sands footprints, and the [Mexico] site — there’s all sorts of evidence accumulating that points to human occupation of the New World before 20,000 years ago, and I don’t understand why that idea is still worth arguing about.”