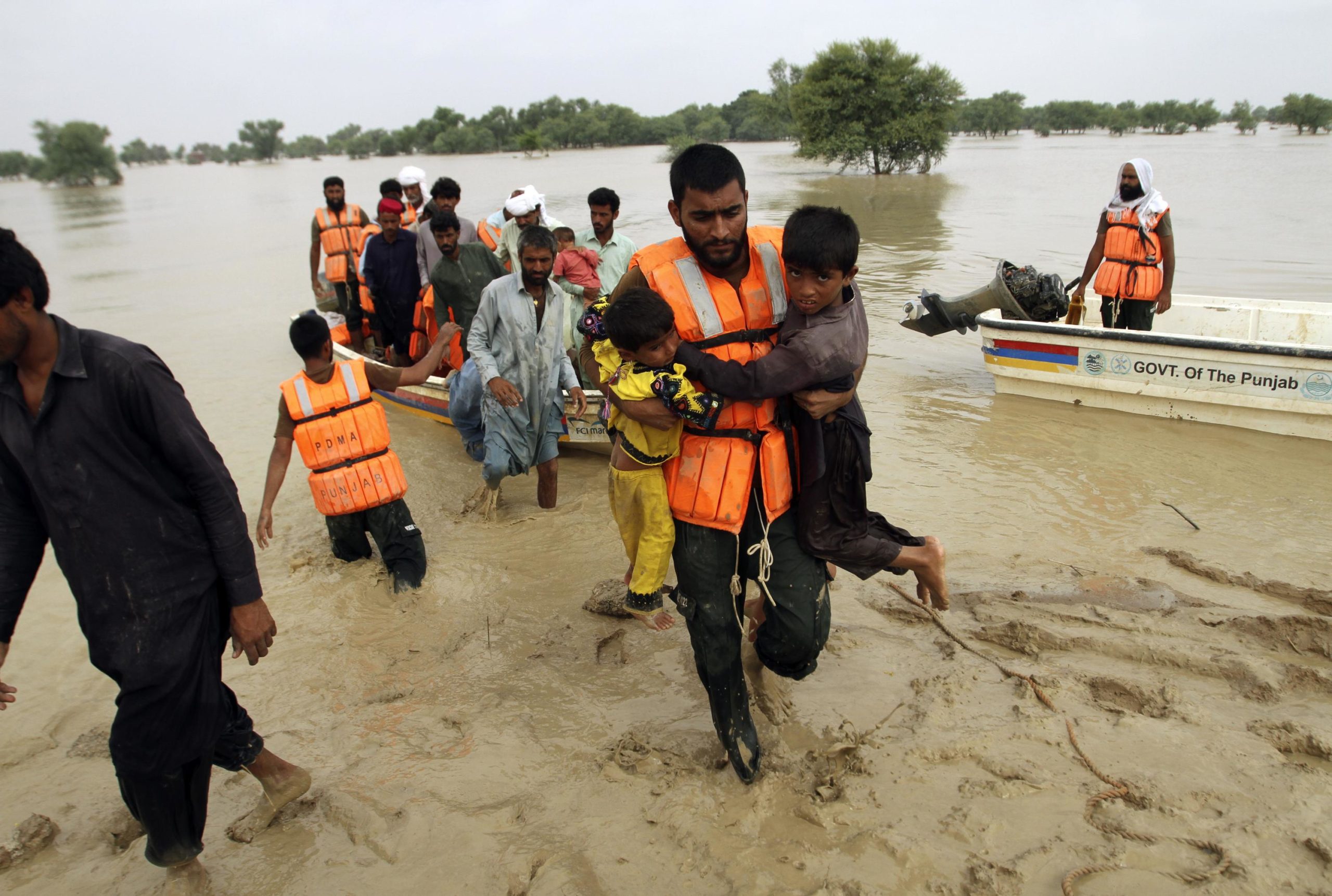 SHARM EL-SHEIKH, Egypt — It was a total loss — the type that is usually glossed over in big impersonal statistics like $40 billion in damage from this summer’s Pakistan floods that put one-third of the nation underwater.

“We lost everything, our home and our possessions,” said Taj Mai, a mother of seven who is four months pregnant and in a flood relief camp in Pakistan’s Punjab province. “At least in a camp our children will get food and milk.”

This is the human side of a contentious issue that will likely dominate climate negotiations in Egypt this month. It’s about big bucks, justice, blame and taking responsibility. Extreme weather is worsening as the world warms, with a study calculating that human-caused climate change increased Pakistan’s flood-causing rain by up to 50%.

While Pakistan was flooding, six energy companies — ExxonMobil, Chevron, Shell,BP, Saudi Aramco and Total Energies — made $97. 49 billion in profits from July to September. Poorer nations, United Nations Secretary-General Antonio Guterres, Europe’s leaders and U.S. President Joe Biden are calling for fossil fuel firms to pay a windfall profits tax. A lot of people want to see some of this money and additional assistance from wealthy nations who have spewed most of the heat-trapping gasses, be used for countries that were affected by previous pollution like Pakistan. The issue of polluters being held responsible for climate-related problems is known as loss and damage. It is all about reparations.

“Loss and damage is going to be the priority and the defining factor of whether or not COP27 succeeds,” said Kenyan climate activist Elizabeth Wathuti, referring to the climate talks in Egypt . Top officials of the United Nations say that they want “something meaningful” in the loss and damage and are encouraged by the negotiations on Friday, Saturday, and Sunday.

Since 2009, the rich nations of the world have promised to spend $100 billion in climate aid for poor nations, with most of it going toward helping wean them off coal, oil and natural gas and build greener energy systems. Officials now want as much as half of that to go to building up systems to help adapt to future climate disasters.

Neither financial pledge has been fulfilled yet, but both don’t address the issue of paying for current and past climate disasters, such as heat waves in India, floods in Pakistan and droughts in Africa.

“Our current levels of global warming at 1. 1 degrees Celsius (2 degrees Fahrenheit) have already caused dangerous and widespread losses and damages to nature and to billions of people,” said Climate Analytics scientist Adelle Thomas of the Bahamas.

“Losses and damages are unavoidable and unequally distributed” with poorer nations, the elderly, the poor and vulnerable hit harder, she said.

After years of refusing to discuss reparations in climate negotiations, U.S. officials and European officials now say that they will have discussion on loss and damage. The U.S., the world’s No. 1 historic carbon polluter — won’t agree to anything that sounds like liability, special envoy John Kerry said.

U.S. emissions that created warmer temperatures caused at least $32 billion in damage to Pakistan’s gross domestic product between 1990 and 2014, according to calculations by Dartmouth climate researchers Christopher Callahan and Justin Mankin based on past emissions. And that’s only based on temperature-oriented damage, not rainfall.

“Loss and damage is a way of both recognizing past harm and compensating for that past harm,” Mankin said. “These harms are scientifically identifiable. And now it’s up to the politics to either defend that harm or remunerate for that harm.”

The United States in 16 days puts more carbon dioxide into the air from burning fossil fuel than Pakistan does in a year, according to figures by the Global Carbon Project.

American Gas Association CEO Karen Harbert said Americans won’t go for such payments to faraway nations and that’s not the way to think of the issue.

” It’s more than Pakistan. Let’s talk about Puerto Rico. Let’s discuss Louisiana. Other things that are happening here at home that we also need to pay attention to and help our fellow Americans,” Harbert said in an interview with The Associated Press.

“If there was an opportunity to talk to people in Pakistan, I’d say … the solution is first of all, you have the opportunity with natural gas to have a much cleaner electric system than you have today,” she said. Aaisa, a mother-of-four from Punjab, said that cheaper, cleaner energy is not important when she and her four children have no other place than a refugee camp.

“With less than 1% of the global emissions, Pakistan is certainly not a part of the problem of climate change,” said Shabnam Baloch, the International Red Cross Pakistan director, adding that people like Bibi are just trying to survive floods, heat waves, droughts, low crop yields, water shortages and inflation.

In semi-arid Makueni County in Kenya, where a devastating drought has stretched more than three years, 47-year old goat and sheep farmer John Gichuki said: “It is traumatizing to watch your livestock die of thirst and hunger.”

Gichuki’s maize and legumes crops have failed four consecutive seasons. “The farm is solely on the mercies of climate,” he said.

In India, it’s record heat connected to climate change that caused deaths and ruined crops. Elsewhere it’s devastation from tropical cyclones that are wetter and stronger because of the burning of fossil fuels.

This global issue has a parallel inside the United States in at times contentious discussions about paying for damages caused by slavery.

” In many ways, we are talking about reparations,” stated Sacoby Wilson, University of Maryland professor of justice and environmental health. “It’s an appropriate term to use” he said, because the rich northern countries got the benefits of fossil fuels, while the poorer global south gets the damage in floods, droughts, climate refugees and hunger.

The government of Barbados has suggested changes in how the multinational development banks loan to poorer nations to take into account climate vulnerability and disasters. Others have also called for debt relief.

It is “about putting yourself in the shoes of others,” stated Avinash Persaud (special envoy to Barbados Prime minister Mia Mottley).

Persaud suggests a long-term levy on high oil, coal and natural gas prices, but one done in reverse. There would not be any tax at current energy prices, and no inflation. But once fossil fuel prices decline 10%, 1% of the price drop would go to a fund to pay victims of climate loss and damage, without adding to the cost of living.

United Nations’ chief Guterres, who has called movement on loss and damage a “litmus test” for success for the Egypt climate conference, has named two high-level national officials to try to hammer out a deal: Germany’s climate envoy and former Greenpeace chief Jennifer Morgan and Chile’s environment minister, Maisa Rojas.

“The fact that it has been adopted as an agenda item demonstrates progress and parties taking a mature and constructive attitude towards this,” U.N. Climate Secretary Simon Stiell said in a Sunday news conference. “This is a difficult subject area. This topic has been around for over 30 years. So that the fact that it is there as a substantive agenda item, I believe it bodes well.”

“What will be most telling is how those discussions progress in the substantive discussion over the next couple of weeks,” Stiell said.