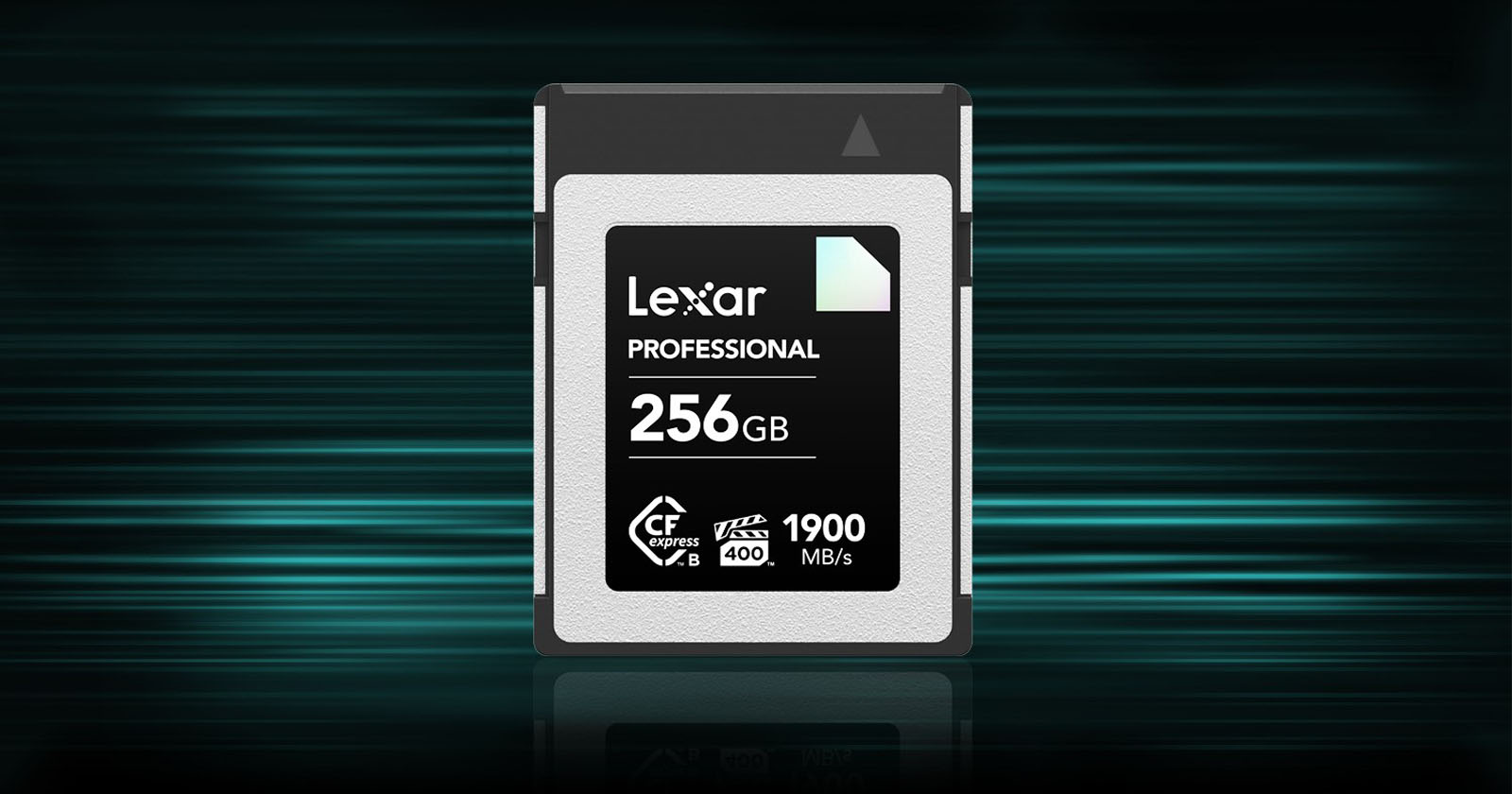 Lexar has released the Diamond Series CFexpress Type A cards. Announced back in April as the “world’s fastest,” the series promises transfer speeds of up to 1,900 MB/s.

The new memory cards look very impressive on paper. Lexar promises that the new Diamond series CFexpress memory cards will reach up to 1,900 MB/s write speeds and 1,700 MB/s read speeds with sustained write performance of up to 1,600 MB/s — easily enough to quality for the Compact Flash Association’s VPG 400 certification, which this series carries. All those numbers are significantly higher than competitors, but promised speeds don’t always equate to actual performance.

As mentioned in our guide to the best CFexpress memory cards, it’s worth mentioning why the speeds seen in testing are nowhere near the speeds any of the companies put on the packaging. These peak speeds are most likely due to the SSD bus being connected directly to a host computer in lab environments. This will provide the maximum possible performance, but it is not realistic for real world situations. PetaPixel’s tests aim to give a better expectation of real-world performance.

In those tests, the new Lexar Professional Diamond series cards averaged a peak write speed of 833 MB/s and a peak read speed of 794. 5 MB/s, which puts the card near the top of all cards. Although other cards have faster peak write speeds than Lexar, very few can match Lexar’s maximum read speeds. Sony TOUGH is the only card to beat Lexar in these categories. 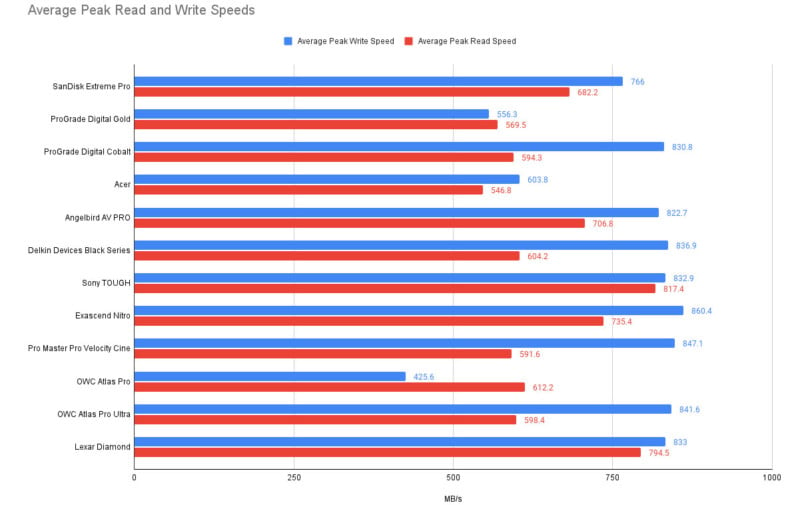 Lexar’s new Diamond card didn’t test nearly as well when it comes to sustained performance, however. While the company promises some lofty numbers, the card managed 499. 5 MB/s here, which is still very good, but shy of the top performers in ProGrade Digital, Sony, and others. That said, as long as the card can sustain more than 400 MB/s, most won’t notice the differences here. 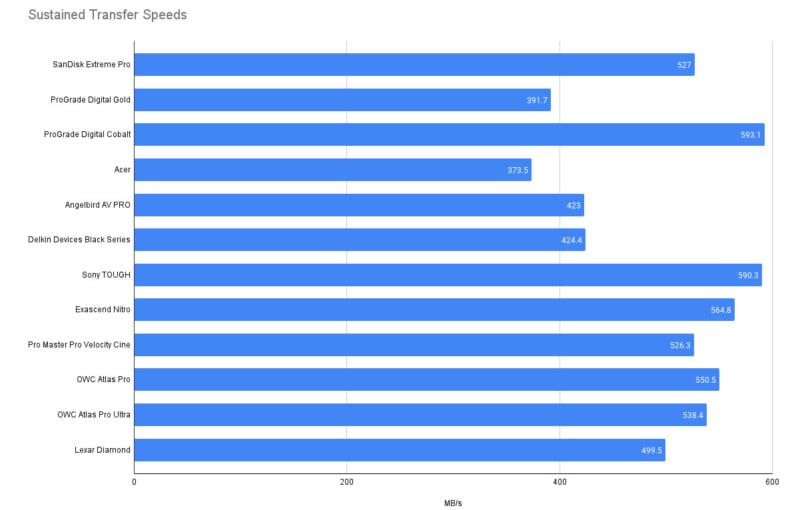 Where PetaPixel tested some serious power was in burst photo performance. The Lexar Diamond series card nearly doubled the amount of time that it could write a Canon R5’s highest burst photo speed (both JPEG and RAW) that other cards could at just over 30 seconds. The second place card, the Delkin Devices Black Series, only made it just longer than 19 seconds before the camera had to slow down its burst speed due to hitting the buffer. 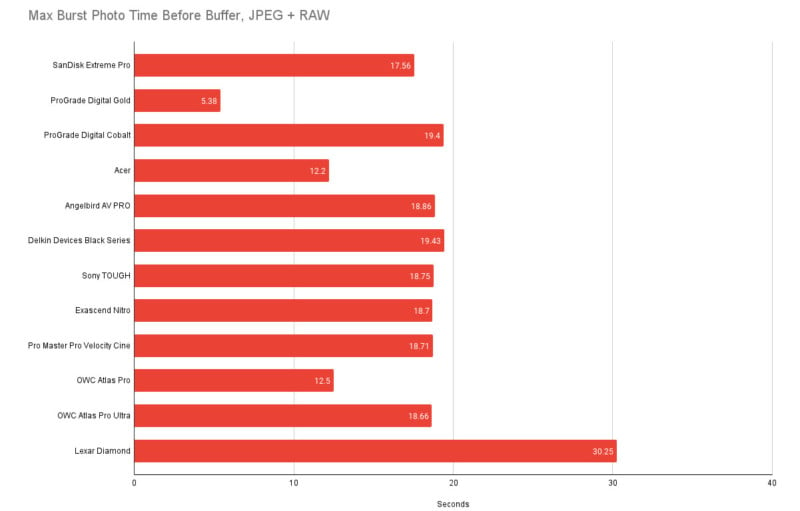 Lexar’s performance here was so dramatically better than the competition that it was tested multiple times to assure the results. It performed basically exactly the same across multiple testing runs, which solidified its place at the top of burst photo performance.

Usually, PetaPixel doesn’t recommend one card over any other for a single task, since several of the top-performing cards will work basically the same in most circumstances. That trend breaks here, as Lexar’s burst photo performance is so much better than the competition that it will have a very noticeable effect on real-world shooting situations.