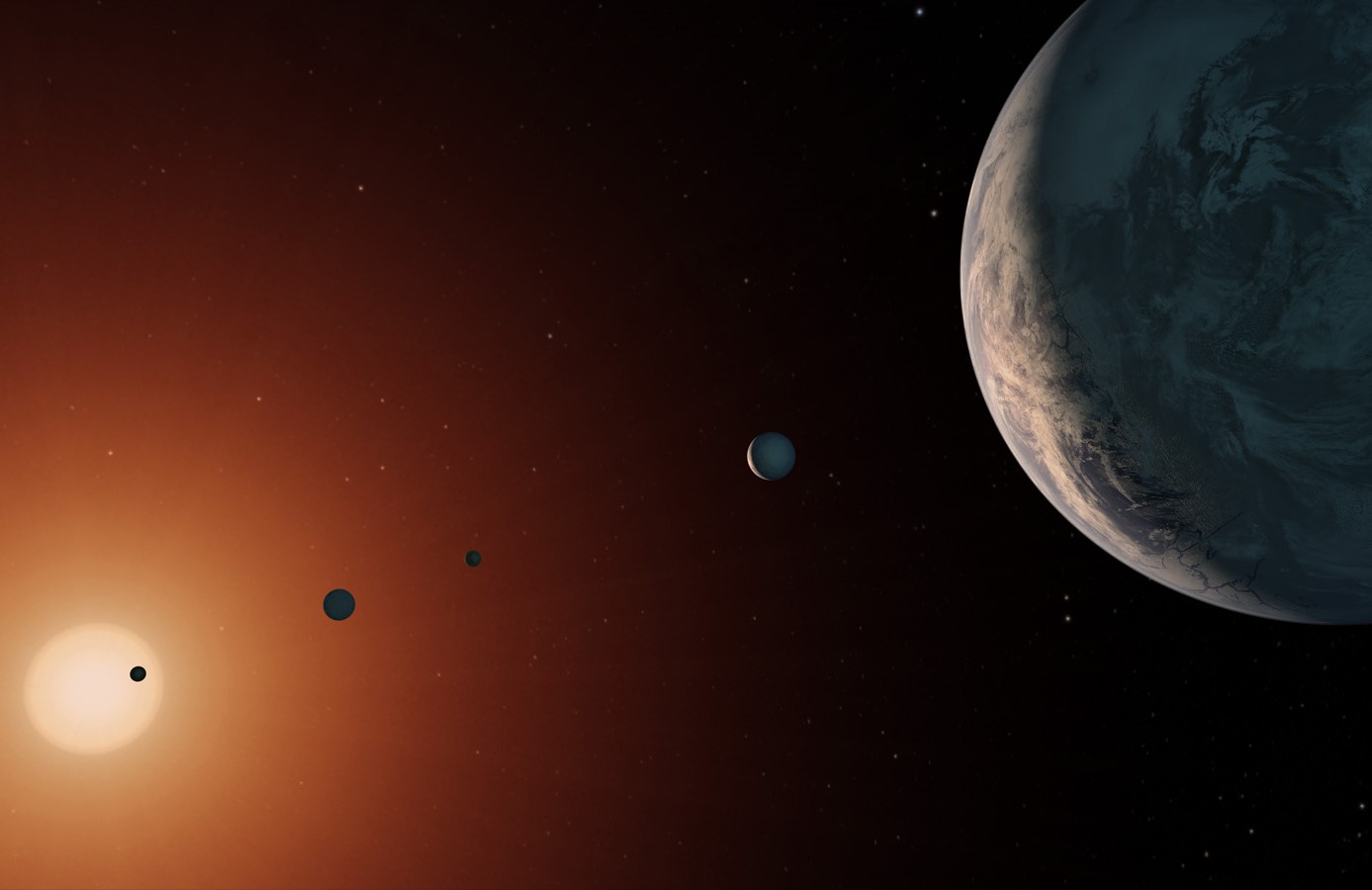 The James Webb Space Telescope has started peering at the most tantalizing candidates for life elsewhere in the universe–a group of exoplanets in the star system known as TRAPPIST-1.

This means that, in the future years, astronomers will have a lot of data coming from TRAPPIST-3.

Webb has wowed the world in recent weeks after NASA released its first batch of proper observations that included the deepest infrared image of the universe ever taken.

While the telescope’s stunning and colorful images of distant cosmic objects capture public imagination, it might be easy to overlook the wealth of raw data the telescope has been collecting and will continue to collect.

Almost immediately after it was capable of carrying out scientific observations, Webb began studying the TRAPPIST-1 system as a matter of priority. TRAPPIST-1 is a red dwarf star located around 12 parsecs (39 light-years) away from our sun and has interested astronomers ever since it was discovered in 2017.

That’s because TRAPPIST-1 was found to have at least seven rocky exoplanets–planets that exist outside of the solar system–orbiting it with sizes and masses similar to that of Earth. What’s more, initial observations suggested that some of the planets might have temperatures low enough to hypothetically support the presence of liquid water.

“There are other planets that are terrestrial or temperate or both, but they’re usually too far or around a star that is too big to really allow us to study them,” Julien de Wit, assistant professor in the Earth, Atmospheric and Planetary Sciences department at the Massachusetts Institute of Technology and part of the team that discovered the TRAPPIST-1 system, told Newsweek.

“So these are the only windows that we have into, possibly, the atmosphere of other terrestrial habitable planets, and that’s what’s really special about them.”

However, due to technological limitations we’ve so far been unable to ascertain a critical characteristic of these planets: whether they have atmospheres or not. That is, until Webb stepped onto the scene.

He told Newsweek: “You really need a very big telescope that is far from Earth, that you can monitor for hours or for days if required, and that operates in a large wavelength range in the infrared [spectrum], because this is where all the molecular spectroscopic features that we are searching for are located. And James Webb is exactly what I’m talking about.”

For de Wit, the technological step forward made with Webb can hardly be overstated. He said, “In terms information content, it’s pretty much moving from listening to radio to television.”

The method scientists will use to work out whether or not the TRAPPIST-1 planets have atmospheres is called transit spectroscopy. This works by gathering sunlight from a distant planet, and then splitting the light into a spectrum. It is similar to how a prism divides light into rainbows.

If sunlight passes through an atmosphere of a nearby planet on its journey to Earth’s surface, there will be visible signs in that spectrum.

“So, you can see imprints from the chemical signature in the atmosphere.

The research will be carried out in steps. First, the Webb astronomers will ascertain whether any of the TRAPPIST-1 planets do indeed have an atmosphere–a huge development in itself.

Second, work will begin to find out what each of these atmospheres is made of. A process that de Wit described as “like peeling an onion.”

“Something worth noting is that something can be easily detectable just because it has very strong features, but it might be very, very low quantity,” he added. “So we will start finding molecular features, that’s great. But then the next step would be for us to have enough data so we can start discussing how much there is of this, of that, and then we can start even extracting information about the temperature, as a function of altitude, and pressure.”

Next, the Webb team could start inferring details about surface conditions and the processes that could have led to the presence of those atmospheric components in the first place.

There are many atmospheric components that would be of interest to scientists studying the TRAPPIST-1 planets–water vapor might be among the first to spring to mind–but for Gillon, methane will be the big one.

“Methane, we know, has a very short lifetime,” he said. “In such an atmosphere, its molecules disappear very quickly. So if you have large amounts of methane in the atmosphere of one of these TRAPPIST-1 planets, with the atmosphere also rich in CO2 or ozone, then it would mean there was a very large source of methane. And we don’t know a lot of abiotic sources, but we know that life can produce methane.

” We believe that methane existed before the Earth’s atmosphere was enriched in oxygen. This was due to methane-producing bacteria.

“So if we detect methane that will be super exciting.”