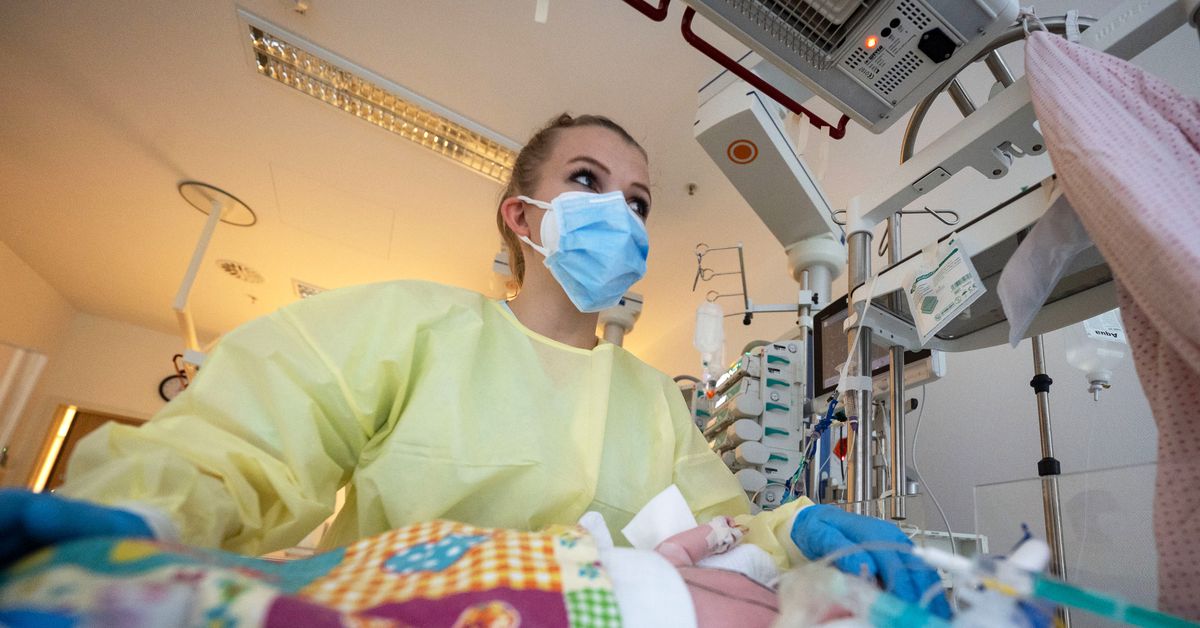 On Halloween, one of the most frightening things in Orange County, California was the alarmingly high number of children being admitted to the hospital due to respiratory viral infections. The county’s health department declared a health emergency that day.

Respiratory syncytial virus, otherwise known as RSV, causes colds and lung infections in people of all ages. It has been responsible for the largest increase in hospital admissions at the children’s hospital this year. “It’s never been like this before,” said Emilee Lamorena, a respiratory program director who also leads pediatric issues at the American Association for Respiratory Care. “It’s all hands on deck.”

Managers and educators — clinicians who now mostly do administrative work — “have been jumping into the bedside,” she said. And the hospital is “getting creative” with its emergency department spaces, converting areas formerly reserved for evaluating mildly ill kids into beds that can be used to treat sicker children.

Similar stories are unfolding all over the US, where seasonal RSV infections shot up earlier and much higher than usual this year. And instead of rolling across the country in a sequence of regional waves, cases exploded everywhere seemingly simultaneously.

The surge of multiple respiratory viruses at once is scary. Perhaps scarier: The onslaught of sick children is catching the US on its heels following health care staffing shortages that started well before the Covid-19 pandemic but have since accelerated.

Thirty percent of health care workers quit or were laid off during the pandemic, and nearly one-third of recently surveyed nurses said they planned to leave direct patient care jobs by the end of this year. Hospitals across the country are having difficulty meeting the demands of patients who have flooded their emergency rooms. “We just have no slack in our system right now,” said Christopher Friese, a professor of nursing who studies practice environments at the University of Michigan School of Nursing.

When it’s severe, an RSV infection is labor-intensive to treat — so when labor is in short supply, a crush of bad RSV cases can cause enormous stress on a health care system. This season’s struggle has made crystal clear how far the US is from solving its health care workforce problems. There are solutions, but they may not be available in the time frame needed to deal with this winter’s devastating wave.

When severe, RSV is much more than just a cold — it’s a life-threatening medical condition that requires a lot of attention and specialized care.

RSV attacks the linings of the airways, which thicken as they become increasingly irritated and produce lots of mucous. The mucous production and thickening of the airways can cause narrower breathing, especially in small or flexible airways (as in infants) that are less sensitive. Imagine you normally breathed through a straw: If you had RSV, that straw would now be made of thick cardboard, and lined with peanut butter.

There are several strategies to help sick patients get enough air through those gnarly airways while the immune system fights the infection. Many of them require special training for nurses or respiratory therapists to feel comfortable using them with patients. For example, the antiviral medication ribavirin has to be administered through a patient’s air supply, and the vapors it produces can be hazardous to people in the room where it’s given.

There are times a provider has to suck extra mucous out of a patient’s upper airway using specialized tools, or place a tube through their nose to feed them when they are too sick to eat.

Some of this training is textbook, but other parts of it are acquired through experience: Identifying the tipping point when a congested person goes from breathing a little heavy to needing machine support — like CPAP or a ventilator — requires a kind of sixth sense.

Good RSV-trained providers are invaluable — and not exactly interchangeable, said Friese. He said that it is not easy to transfer providers from one part of the system in order to increase service levels.

Providers with the same professional training are not interchangeable. For example, Lamorena said she couldn’t send an adult respiratory therapist to work in a neonatal ICU without extensive training. The clinical skills a health care worker needs to care for children with RSV — who make up most of the current hospitalization wave — are often different from those they need to care for adults.

Alternatively, it is possible that some nurses and respiratory therapists might require additional training to be able to provide care for RSV-infected patients. “These folks really need aggressive care often,” said Friese. “And if that’s not the environment you work in every day, that’s going to be a big, pretty steep learning curve.”

Bottlenecks in the hospital are dangerous

When lots of people unexpectedly get very sick with RSV all at once, both personnel and space get spread very thinly — especially in the spaces that care for the sickest patients, like intensive care units and emergency departments. Filling up these critical spaces can be dangerous. Studies have shown that patients do better when their providers have fewer distractions and are taking care of fewer other patients.

At Children’s of Alabama — the state’s only children’s hospital — 125 children were in its 52-bed emergency department on a recent night, said Andrew Loehr, the hospital’s chief operating officer. Loehr said that not all children need to be admitted for hospital stays. However, it creates a tremendous stress situation on the providers, as there are so many sick kids waiting to see them.

In order for an emergency room in New York to handle a constant flow of patients, they must also be able to admit patients to the hospital. The worst patients are left without a place to go when hospitals, and ICUs, become overcrowded.

Across Michigan and elsewhere, “the biggest crunch that I’m worried about is sort of the emergency department-ICU pathway,” said Friese.

That backlog means patients who need to be closely monitored and who need a lot of care and space are stuck in one of the most crowded and distracting places in the hospital — the exact sort of conditions that can lead to worse outcomes for them. “I’m worried about both the folks who are directly affected with an RSV diagnosis, both kids and adults — and then I’m worried about the strain it’s having on the system right now,” said Friese.

There are no reserves coming

A big part of the problem — and not just for RSV — is that the seasonally employed health care workers who might once have helped alleviate strain are much harder to find than they used to be. “We don’t really have a lot of spare people hanging around,” said Friese.

That’s a new dynamic. Prior to the pandemic, hospitals often drew as needed on a “ready reserve” of nurses during busy seasons to supplement their baseline level of staffing. It was a system that worked for everyone, said Friese: “One of the beauties of nursing is that we do have a lot of flexibility,” he said. Nurses who wanted more flexibility in their schedules could scale their schedules up and down over the course of a year, and hospitals didn’t have to pay more staff than they needed to idle during quiet periods.

But when many hospitals furloughed nurses early in the pandemic, many of those nurses left the profession altogether, feeling unsupported by their employers. This reduced the number of healthcare workers who could work overtime during surges in hospital beds, which further depleted staffing.

Loehr said that before the pandemic, his hospital would hire a fraction of the nursing applicants they got — but as turnover has increased, it’s now hiring a majority of applicants. During previous surges, leadership could say, “‘Oh, we need to add 20 more nurses — okay, well, we’ll go back to that pool of people we didn’t select,'” he said. “We don’t have that any more.”

There’s no national system for allocating the nurses remaining in that ready reserve, said Friese — hospital systems do that on their own. So when a nationwide surge happens, there’s no coordination of resources to meet the need where it’s highest.

The solutions are both long- and short-term

Some of the biggest challenges to solving the US’s health care workforce problems are on the supply side. Nurse education programs can only accommodate as many students as they have clinical training slots for — and over the years, those have shrunk in number, in part because of the burden they place on nurse trainers. That’s a chronic bottleneck within the nursing field, said Loehr, and addressing it would have important downstream effects.

Hospitals can temporarily hire travel nurses, if they are able to afford the higher cost, Loehr said. It’s not a great solution: “some argue you kind of are robbing Peter to pay Paul,” he said, because travel nurses usually leave behind full-time jobs at other hospitals that can’t afford to pay them as much, leaving already struggling hospitals even more depleted. It also doesn’t actually increase the number of nurses, but just shuffles them around. His hospital instead chose to encourage its staff to work extra hours, which can also be costly.

In systems where administrative burdens are high, administrators can help alleviate some stress by allowing providers to do “disaster charting” — that is, to streamline the documentation they’re required to do as part of their usual patient care activities. This allows nurses and other staff to spend more time on the things that are most important in order to keep patients safe.

Another strategy is one that will be familiar to many people. “If you look at the data, it’s pretty clear that better ventilation and masking is going to make respiratory infections in general, a lot less problematic in our communities,” said Friese, speaking of mitigation measures that could be implemented among the general public. But these interventions are unpopular, and Friese hasn’t seen much talk about scaling them up.

That’s a lost opportunity, he said: “If we don’t have surging cases in the urgent care and the ER, everybody’s gonna get better care — and I think, regrettably, that messaging doesn’t appear to be coming out.”

RSV hospitalizations haven’t yet peaked, and as cases continue to rise, the pressure may mount to find a release valve. While “getting creative” may help some hospitals get through the crisis, it won’t be enough for all. Solving America’s healthcare workforce issues will require larger-picture and longer-term solutions.

Millions turn to Vox to understand what’s happening in the news. Our mission has never been more vital than it is in this moment: to empower through understanding. Our readers make a vital part in supporting our resource-intensive work. They also help keep our journalism free to all. Please consider making a contribution to Vox today.

The post This RSV season is scary. Hospital staffing shortages are scarier. appeared first on Vox.