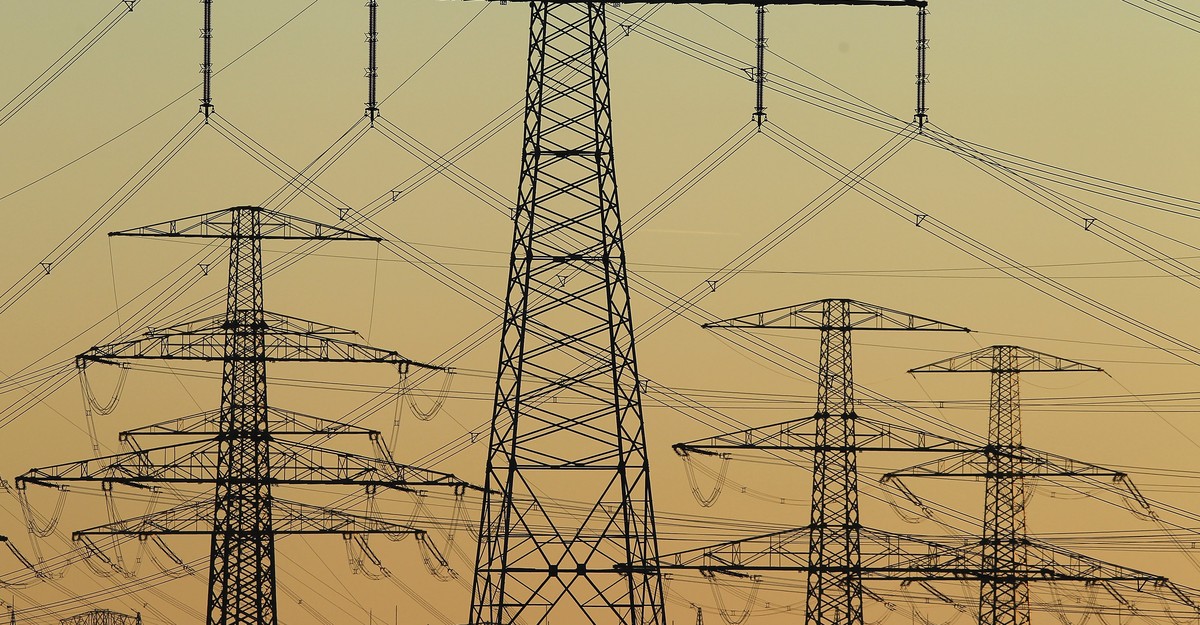 The MIT professor was unequivocal.

” If we were to cease producing CO2, then no oil, coal or gas can be burnt,” declared Carroll Wilson. The world would have to adopt nuclear energy en masse and perhaps even turn to “electric motor vehicles.”

It was June 9, 1971. Wilson was a professor of management and wasn’t speaking at a meeting or environmental event. Wilson was speaking to an audience of businessmen and engineers who were gathered for the annual conference of the electric industry in Cleveland.

His speech was as up-to-date a discussion of climate science as you could find in the early 1970s. Although he said that global warming wasn’t yet a scientific certainty–which was true in those days–he was clear that it needed to be taken seriously. The Edison Electric Institute was the organizer of the conference and seemed determined to present the most current climate research, even though it could have serious implications for its members. Nearly 20 years later, almost the whole electric-utility sector–including its leading lobbying group and the Electric Power Research Institute–have reacted against efforts to stop or understand climate change. In 1992, an EEI article said that global warming would not portend disaster, but bring “cooler days, warmer nights, and better vegetables.”

Why has it taken so long for the United States to treat climate change seriously, much less adopt serious efforts to stop it? Over the past few years, the public has come to understand at least one cause: A handful of oil companies understood the reality of climate change years before the general public, but waged an expensive and secretive campaign through the 1990s and 2000s to muddy the science and play down the dangers. But oil companies didn’t act alone. “Utilities were also in the room,” Emily Williams, a researcher at UC Santa Barbara and a co-author of a new study about the electricity industry’s role in spreading climate denial, told me. Years after scientists had reached a consensus that global warming was real, dangerous, and caused by fossil fuels, utilities sold climate half-truths and untruths to policy makers and the public.

The study, published this month in Environmental Research Letters, reveals the half-century arc that took electric utilities from feting the country’s top climate scientists in the 1960s to denouncing the importance of their research in the 1990s to reluctantly undertaking efforts to decarbonize their own grids in the 2010s.

In the aftermath of the Inflation Reduction Act, the country’s first comprehensive climate law, much of this may seem like academic history. However, utilities’ history of doubt and delay continues to hinder the country’s transition to renewable energy, Leah Stokes , a researcher at UC Santa Barbara and author of this study, said. Many utilities still operate damaging, debt-ridden coal plants today because of the decisions that they made decades ago. Yet, utilities are still vital to combat climate change. In many scenarios where America has a zero-carbon economy, utilities play a larger role, generating, distributing, and transmitting far more electricity than they do today. Stokes stated, “It’s impossible to do this without utilities,”

Electric utilities might be some of the most powerful and least understood companies in America. They count almost every American as a customer, and they bring in more revenue combined each year than Apple does. The truth is that utilities can be so complex and boring, they are often not subject to public scrutiny. You can find publicly-owned utilities as well as investor-owned utilities. There is also a range of utilities. Some utilities have monopoly status and generate their electricity, selling it to customers. Others work in an unregulated market.

But all stripes of utilities fought climate policy aggressively and enduringly, the study finds.

The new research looked at 188 speeches, memos, articles, ads, and other industry documents from 1968 to 2019 that mentioned climate change, carbon dioxide, or other climate-related keywords. It isn’t the first study to look at the role of utilities in climate denial: The Brown University sociologist Robert Brulle and the Energy and Policy Institute, an energy-industry watchdog, have both done so.

Together, the three studies clarify the root of that opposition. Electricity companies saw themselves as part of a coalition that included their biggest suppliers–namely coal and natural-gas firms–and their biggest customers–steel companies and heavy manufacturers. Freight railroads, which move coal around the country, joined the coalition as well. Utility companies saw climate policy as an imminent threat to coal and other fossil fuels. (But of course electricity can be generated in cleaner ways too. )

This report by the Energy and Policy Institute was the first to be peer reviewed and specifically examine the messaging of the sector. Dave Anderson, who is also the author of this report, said that it had been peer-reviewed. “This is a very important study,” says Naomi Oreskes, a Harvard science historian who has researched on the fossil-fuel industry’s climate denial, and was not involved in the study. She said that it reminded us that climate deception hasn’t been the preserve of one or two fossil-fuel companies. It has been sustained by a network cronyistic businesses that depend and support fossil fuels.

Neither Electric Power Research Institute nor Edison Electric Institute refuted the findings of the new study.

“The progress that EEI’s member companies have made speaks for itself. We are leading the world in reducing carbon emissions, and today, 40 percent of U.S. electricity comes from clean, carbon-free resources,” Brian Reil, an EEI spokesperson, told me in a statement.

The Electric Power Research Institute “examines all risks to the grid, including climate, as part of an overall effort to drive innovation to ensure the public has clean, reliable, affordable, and equitable access to electricity across the globe,” Rachel Gantz, a spokesperson for the group, said.

Utilities didn’t start out seeking to distort climate science. As the issue dawned in the 1970s, they treated climate change mostly as a scientific matter, the study finds.

In 1977, an internal memo from the Electric Power Research Institute, or EPRI, straightforwardly described fossil fuels as the “principal manmade source of CO2 emissions” and warned that the amount of that gas in the atmosphere could double by 2030.

That seriousness continued into the next decade. In 1986, an EPRI article about climate change warned that the “sweeping consequences of accumulating greenhouse gases in the atmosphere may turn out to be the greatest environmental problem of modern times.”

But as the science became more concerning, utility executives began to downplay what they could do to stop climate change. By the late ’80s, the industry had started to channel a certain learned helplessness: Even if the greenhouse effect was real, executives argued, neither the power sector nor the United States could solve it alone. At the time, the U.S. power sector alone generated about 7 percent of all global emissions.

Then the science became unmistakable. In 1988, one of NASA’s top climate scientists told a Senate panel that global warming had already begun. The new United Nations-led Intergovernmental Panel on Climate Change, (IPCC), stated that immediate reductions in greenhouse gas emissions are needed. The industry leaders took a fatal decision. They started to deny that there was any climate change. Stokes explained to me that there is a huge difference in the science and utility messaging. The Global Climate Coalition was founded by the Edison Electric Institute, three utilities, and is one of the most prominent advocates for climate doubt and denial. The GCC opposed any effort to reduce greenhouse-gas emissions, attacked individual climate scientists, and ran an extensive, secretive campaign to tone down the IPCC’s research findings. Utilities made up more than a quarter of the GCC’s members at its peak; an EPRI employee also participated in GCC meetings. The GCC was not the only organization utilities supported. In 1991, the Edison Electric Institute helped start the Information Council on the Environment, a short-lived PR group that sought to discredit climate science. The group ran infamous ads in several cities that asked, “Who told you the earth was warming, Chicken Little?” and claimed there was “no hard evidence” that climate change “is occurring.”

The efforts were successful. The main goal of the GCC was to stop the United States from joining the Kyoto Protocol (an early climate treaty). In 1997, the Senate effectively blocked the U.S. from carrying out the protocol or any similar treaty; in 2001, President George W. Bush announced that the U.S. would not implement the treaty.

Bush “rejected Kyoto, in part, based on input from you,” a State Department official later told the GCC’s leaders, according to a briefing memo from that year.

After 2000, the industry switched to delaying climate policy rather than sowing doubt about it. The study finds that the industry embraced the promise of carbon capture and “clean coal” to combat climate change. These technologies are referred to in industry documents as largely theoretical. However, they are mentioned as much as renewables and more established ways to reduce emissions. The study also finds that utilities were involved in at least three groups that sought to block climate policy. EEI attended the meeting of one of these groups, the American Legislative Exchange Council, as recently as 2019; that group still publishes open climate denial on its website.

Not until 2015 did EEI and EPRI consistently acknowledge the reality of climate change and the need for policy in their documents. And this year, EEI was “fairly constructive” during legislative negotiations over the Inflation Reduction Act, pushing for the most aggressive and generous version of the clean-energy tax credits, Stokes said.

Despite this recent change, Stokes said that utilities still need to confront their long-standing role in climate denial. They are dealing with billions in debt that they left behind at uneconomic coal plants. Of the 10 utilities that did the most to spread climate denial, eight remain heavily invested in coal and fossil fuels and have the most inadequate transition plans, the study found.

Fifty utilities in EEI now have “clear forward-looking carbon-reduction goals,” Reil, the institute’s spokesperson said, and “dozens … are aiming for net-zero or equivalent by 2050 or sooner.”

“In general, the utility industry has not been visionary. They’ve been stuck in the past and have not been able to see the change that the clean-energy revolution could bring,” she added. Even though climate change represents the industry’s first pathway for growth since the 1970s, utilities resisted following it for years, Stokes said. Its objection to climate change was as much sociological as it was profit-driven.

That backwards-looking attitude is exactly the opposite of what Wilson preached in his 1971 speech. Begging his audience to consider the next 30 to 50 years, he reminded them that the problems of the 21st century were not so far away.